On Sept. 1, 12 students, one teaching assistant, two professors and two guides boarded 24-foot voyageur canoes to embark on an adventure down the Mississippi River. No, this isn’t a twist to the Gilligan’s Island theme song — it’s the story of Augsburg College’s “River Semester.”

Minneapolis-based Augsburg, one of the ELCA’s 26 colleges and universities, led the nation’s first semester-long course on the mighty Mississippi last fall. The group shoved off from St. Paul, Minn., on what the Minnesota governor declared “Augsburg College River Semester Day” and was joined by nearly 100 guests who paddled alongside them for the first two hours of the adventure.

The leader of the fleet was Joe Underhill, a political science professor at Augsburg who had been brainstorming ideas for this trip for 15 years. “It seemed that there was a great opportunity to educate students by taking them out on the Mississippi River, which flowed by just a few blocks from our campus,” he said. “As I explored this idea, I found that almost no one was using the river as a classroom.”

After leading a few short river trips with students, Underhill connected with Wilderness Inquiry, an outfitter and guide service, and began to think that a full-semester expedition was a possibility. 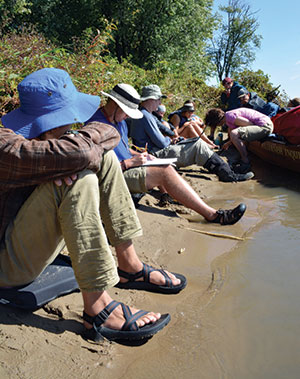 Ricky Taylor
Augsburg River Semester students use the Mississippi shore as their classroom.

A couple of years later it became a reality. The crew spent four months traveling 2,500 miles down the Mississippi from Lake Itasca to the Gulf of Mexico. About 750 of those miles were paddled and the rest were via bus to ensure the group had time to cover the length of the river while allowing off days for coursework, studying and rest.

Underhill and Thorpe Halloran, a biology instructor at Augsburg, led four courses (16 credits) on the trip, including environmental politics and a lab course studying ecology of the river.

Many students also had independent projects or research, which ranged from art projects analyzing relationships between industry and wilderness to studying how sediment deposition affects Cajun culture in the Gulf of Mexico. Some of the independent projects included government and nonprofit partnerships. 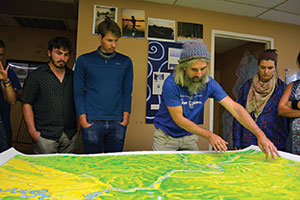 Ricky Taylor
John Ruskey (second from right) of Quapaw Canoe Co. shows Augsburg students his maps of their route on the Lower Mississippi.

Sophomore Blair Stewig worked with the National Park Service to create a brochure about hypoxia (oxygen deficiency) in the Gulf of Mexico. Hannah Arvold, sophomore, partnered with a Montessori school in Minneapolis to provide materials for environmental education.

Junior Noah Cameron used a hydrophone to record the river’s underwater noises to learn how people relate to it in different areas. “We could be learning about these places and things in a classroom, but out here makes it much more memorable,” he said. 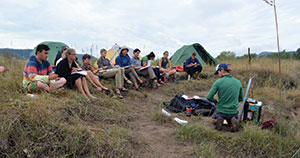 Ricky Taylor
Students break for class and discussion during a day off from paddling.

For his independent project, junior Ricky Taylor served as the group’s photographer and videographer. He spent his days “shifting gears” between paddling with his classmates, doing homework and snapping photos.

“It wasn’t easy, but through it came some of my most exciting moments from the trip,” Taylor said. “In those split seconds, I got to capture something beautiful, amazing or just down-right fun.” 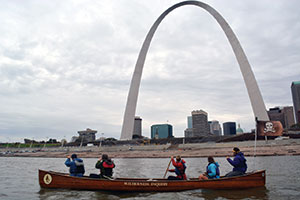 Ricky Taylor
Paddlers pause to take in the Gateway Arch as they travel down the Mississippi past St. Louis.

Rowing, rowing on a river

The average day consisted of sunrise wake-up calls, breakfast and in the water paddling by 8:30 a.m. They would paddle until early evening when they’d set up camp, make dinner and spend the evening around a campfire.

The group made stops at major spots along the river, including La Crosse, Wis.; Dubuque, Iowa; Hannibal, Mo.; St. Louis; Memphis, Tenn.; and New Orleans. During these off days, they would have class, work on papers and research, attend site visits or guest lectures and, of course, do laundry.

Whether it was by learning about the history of Native American communities, studying Mark Twain and the literature inspired by the river, or seeing how the river plays a role in the culture of the French Quarter, the stops allowed the group to learn just how much the river impacts the communities on its shores. 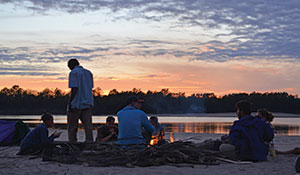 Ricky Taylor
River Semester students converse around a fire as they set up camp for a night on the shore of the Mississippi River.

“Over the last decade I have been connecting with researchers, academics and other local experts in building the itinerary for the trip,” Underhill said. “There is a great network of folks who work on the river. The local experts provided the kind of place-based knowledge that only they possess.”

One person they connected with was Reuben Heine, a professor at Augustana, another ELCA college in Rock Island, Ill. Heine set up two research projects for the River Semester students.

“We had such a variety of people — students with majors from political science, to film, to biology,” Arvold said. “We had a blast learning about each other, which in turn helped us learn a lot about ourselves.” 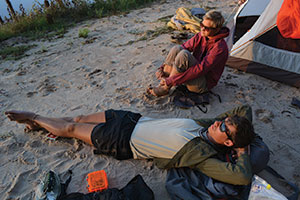 Ricky Taylor
Hannah Arvold (top) and Karl Hahn look out over the confluence of the Mississippi and Arkansas rivers at sunset.

Underhill said, “They were physically and mentally challenged with long days. It was a great opportunity for self-discovery and vocational discernment as students explored their own passions, strengths and weaknesses.”

Stewig most appreciated witnessing the diversity in culture as they traveled.

For Taylor, some of the best memories he has are from the people they met along their journey. “From Minnesota to Louisiana, you tell someone ‘I’m paddling down the river,’ and you’re guaranteed to have a great discussion with them,” he said. “There’s a collective of people referred to as ‘River Angels’ who spend their time helping out paddlers. They don’t ask for anything, they don’t expect a reward — they just want to help and wish you a safe journey.”

It’s not a typical college experience to spend four months’ worth of quality time with classmates and professors, but Underhill thinks the challenges that came with that led to the best learning opportunities.

“We were together 24/7 with rare breaks and we bonded powerfully as a group,” he said. “Most of all, this was an amazing experience that was a lot of fun. We got to experience one of the great rivers of the world in a full, rich and deep way that will leave a profound mark on all of us.”