Rev. Chuck Hubbard of Gloria Dei Lutheran in Garland TX and Rev. Doris Dupree Harris of St John's Lutheran enjoying the dialogue going on between members of the two congregations at a meeting help at Emanuel Lutheran in Dallas TX.

Doris DuPree Harris and Chuck Hubbard, two Dallas-area pastors, have brought their congregations together for what they call “Courageous Conversations” about racism.

The inspiration came from the 2014 Northern Texas–Northern Louisiana Mission Area (synod) Assembly, which had an emphasis on social justice shaped by its public witness team. This group, of which both Harris and Hubbard are members, had spent a few years before that assembly focusing on understanding racism and participating in anti-racism training.

“We wondered what our next step should be and it came down to conversation,” Harris said.

“We live in parallel universes that seem similar but are really quite different. As we have developed connection, we have found what I think is real community. That has drawn us into solidarity. We first have to face our implicit biases so we can stand together for reform.”

Harris, who is African-American, serves St. John Lutheran Church, Oak Cliff, in southern Dallas. Hubbard, who is white, is pastor of Gloria Dei Lutheran Church in Garland, a community on the opposite side of Dallas. The congregations have met seven or eight times and alternate hosting the Courageous Conversations. About 20 to 35 people take part. “We talk about racism and tell our stories,” Harris said. “Our only guidelines are to be respectful and to listen. Now our relationships have taken hold. We see each other in a new light. These people are open-minded.”

One conversation was about last summer’s nationally reported incident when white police officers used violence against African-American teens at a swimming pool in McKinney, north of Dallas.

“We don’t share personal stories so much, but we talk about who we are, why we feel the way we do and what actions we might take,” Harris said. 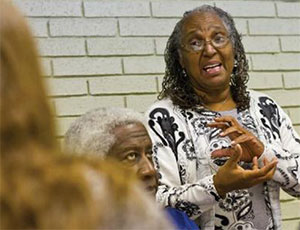 Mark Graham
Harris shares a story with the Courageous Conversations group. The group engages in respectful dialogue to build understanding and take action against racism in their community.

Courageous Conversations has been a “breakthrough” for Claire Burns, a member of Gloria Dei.

“I’ve come to understand white privilege as I had not thought about it before,” she said. “These meetings have brought things to light from a different perspective for me, things that never occurred to me before. We live in such a white world. Black people are more likely to be stopped by police. Statistics bear that out. A black person shopping in a department store is trailed as a suspicious person.”

Burns’ husband, Rich, agreed: “I’m almost 70, and I thought racism was over in 1965. Now my impression is that it’s getting worse. But I enjoy our conversation and the company. This needs to be done more widely.”

The Courageous Conversations group used Between the World and Me (Spiegel & Grau, 2015) by Ta-Nehisi Coates to help fuel discussion.

“It provides a platform for us to continue our conversation about race and racism in America,” said Emma Rodgers, a member of St. John. “It appears many of us are on the same page, including the leadership of the ELCA, our pastors, and members of St. John and Gloria Dei. We are moving forward to deal with and take action to confront racial matters and racism — and to celebrate the diversity in the Lutheran church and in our nation.”

Sometimes guests from the community speak to the Courageous Conversations group. Babetta Hemphill, director of student services for the Garland School District, came to talk about behavior issues in schools and disproportionality of discipline.

“Garland is a middle- to lower middle-income city with many Hispanic people, but a disproportionate number of African-American students are disciplined in the school district,” Hubbard said.

The chief and assistant chief of the Garland police also joined the group for a conversation about the process of selecting and training officers.

“These conversations, it seems, are too rare,” Claire Burns said.  “I’m struck that people from both churches, at our age and so educated, have never crossed paths.”

“People are so eager to talk, we have to cut them off sometimes,” Hubbard said. “A real trust has grown between the two Lutheran congregations. Conversation is free-flowing despite the sensitivity of these issues. Our conversations seek to be civil, respectful and beneficial. It has been a wonderful learning process, but with heightened awareness comes frustration. We want to undertake some advocacy.”

Harris is thinking about the next steps. “Our groups are diverse and our gifts are diverse,” she said. “We have to develop a menu of action steps. Some people want to write letters to the legislature, some want to protest. Others plan to register voters or volunteer in the schools.”