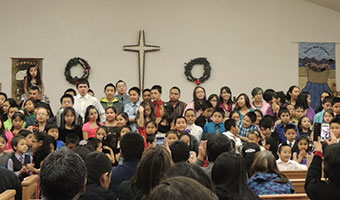 Shishmaref, Alaska, is often used as an example for those wanting to tell the story of climate change in the Arctic. But Marvin Jonasen, pastor of Shishmaref Lutheran Church, says the city is about much more. On Christmas Eve, children of this Inupiaq Eskimo village on Sarichef Island some 120 miles north of Nome, will gather as they did last year in this photo. Instead of a village whose surrounding Arctic tundra makes the pages of National Geographic, Jonasen said the focus will be something else: “A living photograph of 164 children and 10 teacher/helpers gathered in front of the sanctuary, bringing together the community in a moment of faith, hope and love that truly reflects a culture that has faced tremendous challenges” — and an uncertain future. The service will end with “Silent Night” sung in Inupiaq with a “serene beauty that cannot be described in words, but only felt in its awesome depth of wonder and grace,” Jonasen said.