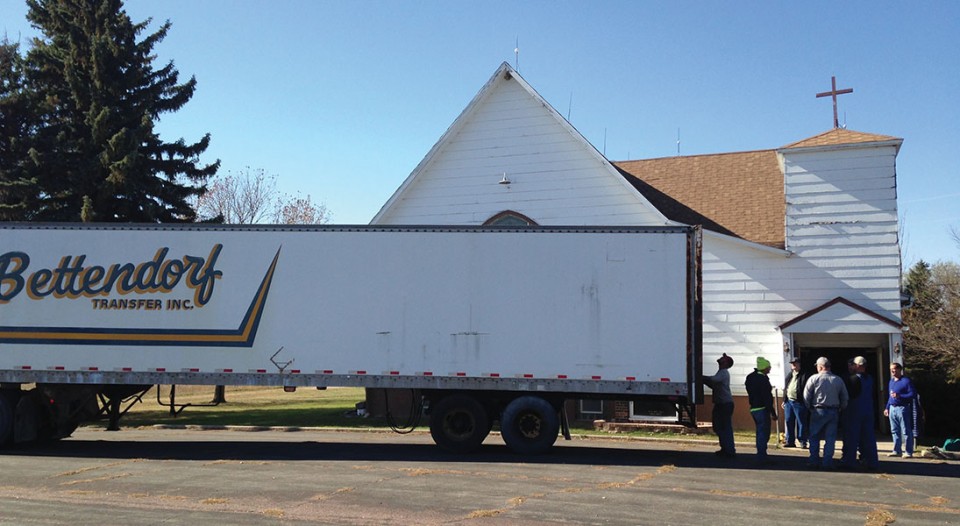 Small business closings across the country are quite common. When the accountant and attorney say, “The time has come,” typically employees are let go, merchandise is liquidated, doors are closed and consumers move on. 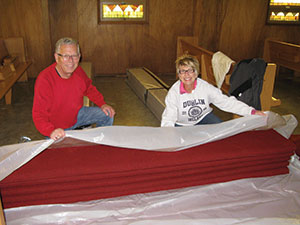 But what happens when a church comes to the reality that it’s time to stop ringing the bell to worship? Former members of Eidskog Lutheran know this story well — the small church in western Minnesota closed Oct. 1, 2015.

“The whole process (closing the church) has been rather like dealing with a terminal illness,” said Kathy Haukos, who married a lifetime Eidskog member in 1969 and played the organ there for 35 years. “You know the end is coming, but even so, you’re not totally prepared for that day.”

Eidskog’s origins date back to the late 1800s when Scandinavian immigrants started worshiping together in the rural area of Ortonville and eventually built a church. Sermons at Eidskog were delivered solely in Norwegian until 1924 when church leaders decided to use English every other Sunday, a practice that continued until 1942.

In 1988 the congregation became affiliated with the ELCA and officially changed its name to Eidskog Lutheran. At its peak, the congregation had a choir and four “ladies’ circles” and was educating more than 100 Sunday school students, said Eldon Knutson, Eidskog’s last president. He said up until the late 1990s about 50 to 75 people would regularly show up for Sunday worship services. 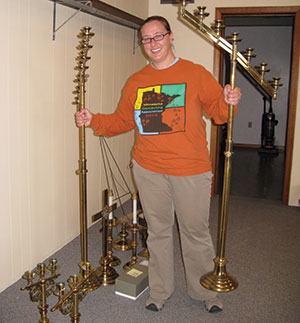 CAROLYN JACKSON
Alyssa Boock carries out items from Eidskog, which closed in October 2015.

“Rural areas are shrinking, and schools, businesses, elevators and churches are either consolidating or disappearing,” said Knutson, whose great-grandfather was a charter member of Eidskog. When the church decided to close, he added, Sunday attendance had dwindled to about 10 to 25 people.

The shrinking size of Sunday worship affected the church’s viability. “I know in the Bible it says ‘where two or more are gathered …,’ but that doesn’t necessarily pay the bills,” Haukos said.

When the decision to formally close Eidskog was finally made, Haukos said leaders’ discussions turned to what to do with the church’s many fixtures, paraments, dishes and other belongings. “We were pretty sure we didn’t want to have an auction,” she said, saying it was her hope “that our church furnishings would be used for the purpose for which they were intended.”

But how could they accomplish this? Run an advertisement?

“Yep, on a whim, that’s what we did,” Haukos said. Eidskog members ran an ad in The Lutheran (July 2015), saying when the church was closing and listing available items. 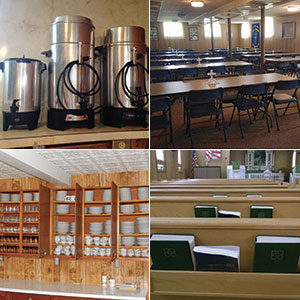 Dick Jackson of River Falls, Wis., some 200 miles from Ortonville, came across the ad and “on a whim” called the folks at Eidskog. He is a member of Hope Lutheran, a congregation that, unlike Eidskog, isn’t closing but rather hoping to open soon. The 10-year-old congregation broke ground for a building in September 2015.

After connecting with people at Eidskog, Jackson and his wife, on behalf of their congregation, made the trip west to have a look at what Eidskog had to offer. “We were blown away by all the stuff they were simply giving away,” Jackson said.

After reporting back to Hope’s council, Jackson said they decided to “pretty much take everything they had to offer. We took the church pews, the whole kitchen — including the stove and refrigerator — folding chairs, tables and even five fire extinguishers.” The items were loaded on a semitrailer and hauled to River Falls.

“When we were able to connect with Hope, we were very elated that our church furnishings would be used for the purposes for which they were intended,” Haukos said. “I have been a very strong advocate of this whole process because I think it is very cool that we can help Hope make their church dream a reality.”

Roger Tweiten was one of eight members from Hope who attended the closing service. “One could quickly appreciate the long, rich history of this church reaching back to 1885,” he said. “The sermon and music accentuated the service of closing, but it wasn’t until the actual stripping of the altar, carrying out of the Bible and other artifacts one by one, that the enormity of the situation gripped us and tears of sorrow began to well up in our eyes. The church was literally having its last rites, its funeral.”

Sandy Johnson, pastor of Hope, wasn’t able to attend Eidskog’s final service but sent a message to be read. It said, in part: “Thank you for all of the gifts you are sharing with Hope Lutheran. They will help make possible the continuation of your ministries through the furthering of ministries in which Hope now participates. Thanks be to God for your generosity.”


Jackson is a retired financial adviser and freelance writer who lives between homes in River Falls, Wis., and Naples, Fla., with his wife, Linda.