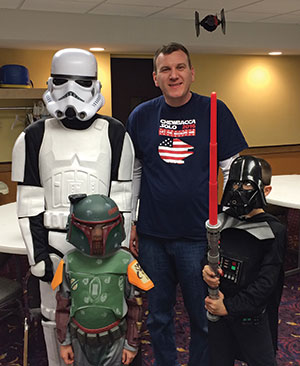 When the new Star Wars movie made its December debut, congregations, pastors and organists across the ELCA used it as an opportunity to tap into current culture. First Lutheran Church in Cedar Rapids, Iowa, was no exception. On opening night of Star Wars: The Force Awakens, Craig Brown, pastor and an avowed Star Wars fan, showed clips from the first six movies and used the fall of Anakin Skywalker and his redemption through his son, Luke, likening it to our redemption through Christ. Members were encouraged to wear costumes, such as Chris Hauger (stormtrooper at left), Tyler Trudo (Boba Fett) and Kirk Brown (Darth Vader at right), standing with Brown.