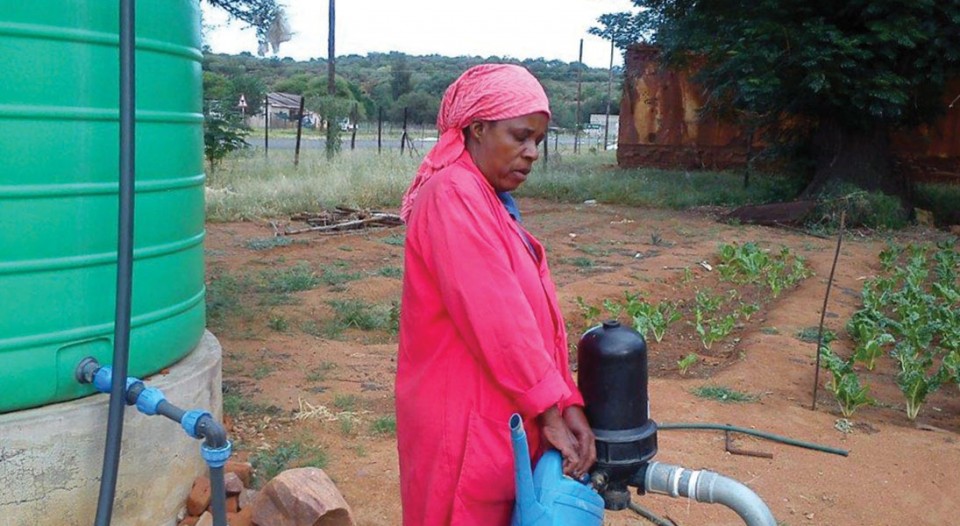 Morwa Moloi from the Evangelical Lutheran Church in Botswana (ELCB) fills a watering bucket at the water tank in the garden. 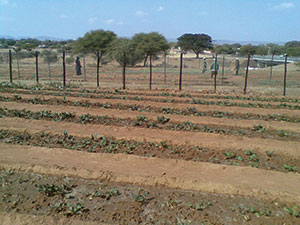 Botswana, with one of the highest rates of HIV and AIDS in the world, is known for its progressive approach to addressing community needs. One of its many projects is the Manyana Lutheran Diakonia (MALUDI) Garden Project. During the growing season, the garden produces fresh, healthy food for families in the area affected by HIV and AIDS.

Dora Mosmele, a member of the Evangelical Lutheran Church in South Africa (ELCSA), checks on spring onions at the Manyana Lutheran Diakonia (MALUDI) Garden Project in Manyana, Botswana. Produce from the garden is distributed to locals living with HIV and AIDS.

Started in 2009, the garden was conceived a year earlier as a joint diaconal (service) program by the two Lutheran churches with assistance from the ELCA. Six women manage the garden in four-month rotations — three from each church. The even split is intentional, and it’s working.

“The four months pass by so fast because we enjoy working together. We see change,” said Motlhhophi Sithibe, an ELCB member who is currently working at the garden. “We don’t feel the difference between the two churches. We feel like we are working together as a family. Even outside of the project we recognize and accept each other.”

But the feeling of family didn’t come immediately. “One could feel the discomfort of the workers as they were expected to work side by side toward the same objective,” said Nicholas Isaacs, a pastor and general treasurer of the ELCSA Botswana Diocese who used to live in a parsonage next to the garden.

“As the project progressed, these fears were laid to rest. Soon after, the youth from ELCB were able to approach an ELCSA congregation for the use of the church building events. Meeting at ministers’ fraternal meetings, community prayers at the local clinic, school, kgotla (public meeting) and funerals became easier with time. So, yes, the garden helped with reconciliation.”

The gardeners pray each morning before they begin working, a ritual that reminds them they are one in faith.

Dorcas Macha, a worker at the MALUDI Garden Project from the ELCSA, said the small stipend the gardeners receive helps as well. The project is funded in part by ELCA World Hunger. “The monthly stipend helps me to buy food and clothes and to meet other needs of the family,” she said. “We help other people who are in need with vegetables from the garden.”

Although the garden is enthusiastically supported by the community in Manyana, it’s not without challenges. 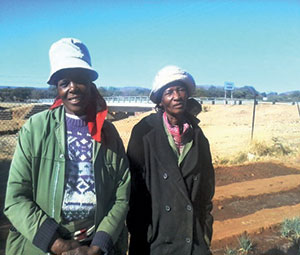 When Basiami Molefe of the ELCB (left) and Gomolemo Molefe of the ELCSA first connected with the MALUDI Garden Project, they did not want to work with each other because they were from different churches. Now they work together to care for people in need in the community.

Because of the drought, “water is a big struggle,” said Philip Knutson, who regularly visits the two churches and the garden site as part of his work as ELCA regional representative for Southern Africa. “The garden becomes a target.”

Goats and birds flock to the garden for its well-tended vegetation as the drought stops the grass in the area from growing in full. Knutson said some of the work entails chasing the surrounding wildlife out of the garden plots.

People also retrieve water from the well on the church property where the garden grows. The church serves as a central location for many in the community for this reason.

Despite the drought, the latest projections for the MALUDI Garden Project show that the beneficiaries fluctuate, but an estimated 120 people are helped by the efforts, including the families who receive the food care packages from the garden. 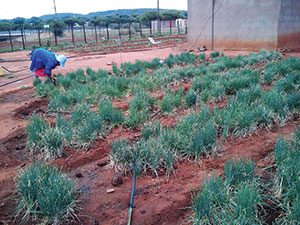 Working together, the women from the two churches “have made it a success,” Knutson said. “[The ELCA’s] role is minimal, they are the ones organizing this.”

Project organizers work with Manyana’s social worker who determines which people are most in need. Knutson said the social worker and local government clinic appreciate the cooperation from the church. “The [churches] are not working in isolation, they are working with the community, in the community,” he said.


Pinther is an alumnus from Augsburg College in Minneapolis and is now a writer living in the city.