At Oaks Indian Mission in Oklahoma, Lutherans pondered what it means when a white person supports sports teams that use racial slurs as their mascots. Many miles away at Living Waters Lutheran Church on the Cherokee Indian Reservation in North Carolina, visitors participated in worship that incorporated American Indian spiritual practices.

Both of these groups were taking part in immersion programs hosted by ELCA American Indian ministries. The programs are “vital” to the life of the ELCA, given the world’s diversity, said Gordon Straw, ELCA interim program director for American Indian and Alaska Native ministries.

“More and more immersion experiences are focusing on engagement. Doing service projects and providing clothes or food for distribution are still part of the experience but are less the focus in favor of a desire to learn about another sister or brother in Christ,” Straw said.

At Oaks groups hear from Cherokee storytellers and participate in Indian sports. They eat together “and engage in activities to inform them about the past, present and future of native people,” said Meredith Harber, pastor of Eben Ezer Lutheran Church, located on Oaks Indian Mission. “They wrestle through the things that we learned in our history books and through current media that send a message about people that is incorrect.

“[The goal] is to know the other. That’s not just outside people coming in and using the Cherokee people as their personal museum. It’s also the Cherokee people hearing the stories of their family in Christ from across the United States. It’s to not assume, but to learn through one-on-one interaction.” 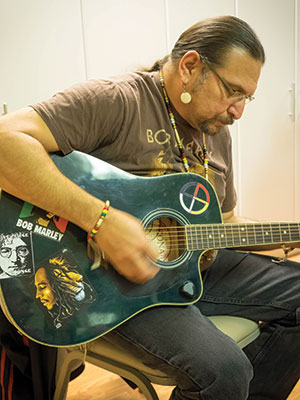 “Spiritually, I’ve witnessed people move through the shame and anger of what it means to live in a nation built on stripping thousands of tribes of their culture and identity,” Harber said. “In some ways there’s this ongoing act of confession and forgiveness. I think that’s a spiritual element of the immersion — that heinous acts are not suddenly removed. It’s important to take the time to acknowledge them.”

When people visit the Pine Ridge Indian Reservation in South Dakota, home to the Lakota, conversations focus on breaking down generalizations.

Karen Ressel, pastor and director of the Pine Ridge Retreat Center, said alcoholism, domestic violence, suicide and unemployment are often what people think of when they first participate in the center’s immersion program. She helps people “unravel that one-dimensional view” to understand in a broader context what life is like on the reservation.

Michele Hermansen
Leonard Little Fingers leads a discussion on history and culture with a group at Pine Ridge.

At Living Waters, sage is burned as an act of cleansing before a liturgical service begins. The congregation then performs a Cherokee song and prays to the east, south, west and north.

“We look skyward to the heavens and praise the creator for the beauty of his creation. … We give thanks for the earth,” said Jack Russell, pastor of Living Waters. The congregation then prays inward to cleanse their hearts and minds.

Russell said the sage burning is similar to the Lutheran practice of burning incense, and the act of praying inward mirrors Scripture: “Create in me a clean heart” (Psalm 51:10).

Immersion participants learn that spiritual practices are an important element of community on reservations.

“Through immersion, visitors can learn Native Americans have long had their own spirituality,” said Kate Adelman, an associate in ministry who serves House of Prayer at the Navajo Evangelical Lutheran Mission in Rock Point, Ariz. “They understand God through nature. They do all the things we do that we assign to religion. They have worship ceremonies … and when tragedy happens, they gather in community.”

The immersion programs evolved within American Indian ministries that had relationships with congregations through mission or financial support.

“Many of the groups are from congregations that already have a long-term relationship with ministries they visit,” Straw said. “Many who go on these immersion experiences come from quite a distance, concerned more with the strength of the relationship than with how far one must drive.

“The biggest thing tribal people can learn is that people who are coming are actually interested in their lives rather than just being seen as clients or objects of mission.”

That’s a critical lesson. A major challenge these ministries face is how to build trust among American Indians who have had a long history of being deceived and have had bad experiences with some church groups treating them as projects, not people. The immersion programs have helped break those barriers.

Being asked to share who they are gives American Indians an opportunity “to speak their truth, and that’s healing,” Adelman said.

Tribal member Earl Arkinson has spoken to some of the immersion groups at Rocky Boy’s Indian Reservation in Montana. His goal is to help break down stereotypes while sharing his beliefs.

Loni Whitford-Taylor, another tribal member, said the tribe also benefits from the programs by learning about other cultures.

“One of the biggest takeaways from the program is the importance of how Christians engage a culture outside their own,” said Bekki Lohrmann, pastor of Faith Lutheran Church in Joliet, Ill., that has had members visit Oaks. “It’s important to enter in a way that’s respectful, dignified, engaged, fair and representing Christ.”