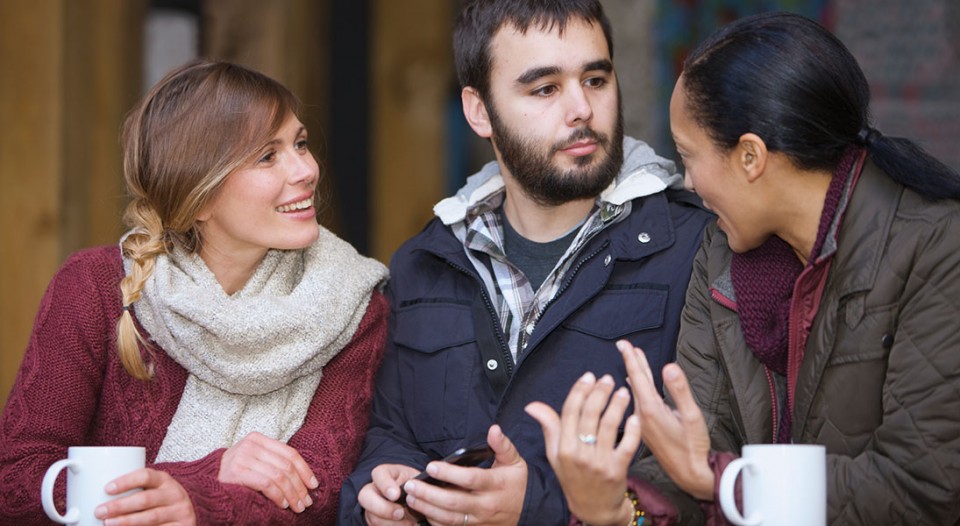 Series editor’s note: On behalf of current and former colleague seminary presidents who sponsor this monthly feature, as well as its many authors over the past several years, I express  gratitude for the unwavering support and encouragement of retiring editor Daniel J. Lehmann, whose commitment to “Deeper understandings” has taken us all to a more profound faith. With Richard Perry’s prophetic piece offered in Black History Month, the beat goes on. —Michael Cooper-White

It must have been quite a global house party. Pentecost Day! Luke’s Gospel records that by the Spirit’s power people from every nation under heaven and all walks of life heard about the mighty works of God. Born on this festive day, the church reflected the reality of the global community — a place where race, class, gender and other barriers humans create would be overcome (Acts 2:1-12).

John of Patmos offers a similar vision to Luke’s story. “After this I looked, and there was a great multitude that no one could count, from every nation, from all tribes and peoples and languages, standing before the throne and before the Lamb, robed in white, with palm branches in their hands” (Revelation 7:9).  Like the day of Pentecost, the people were praising God for what God had done and was doing in their lives.

These two biblical passages, among many others, frame the ELCA’s ongoing conversation and journey toward becoming a more multicultural church.

Since 1987 the ELCA has developed ambitious mission plans to reach people in communities of color. Congregational leaders have been identified, trained  and retooled to engage the multicultural nature of society. Ethnic specific hymnals have been printed in an attempt to bring diverse musical traditions into the life and worship practices of congregations. The face of the ELCA has changed through the election and appointment of people of color in various decision-making positions. This can be affirmed as a positive direction toward becoming more multicultural.

Yet the ELCA remains among the least racially and ethnically diverse denominations in the U.S. Many questions can be asked about this situation. Why is it that, more than a quarter century since we set lofty goals, only 3 to 4 percent of us are people of color? Do our proclamation and action in the world lack power and conviction? Is there something about the Lutheran ethos that is a barrier to incorporating how racially and ethnically diverse people understand God and Jesus Christ operating in their lives? Does the Lutheran understanding of God’s action in and through the birth, life, ministry, death and resurrection of our Lord and Savior Jesus Christ (justification by grace) fail to connect with communities of color? Is multicultural ministry a matter of faith or following a fad?

This article doesn’t prescribe answers that slavishly can be followed. Rather, it suggests we begin to think differently and more deeply about what we mean by multicultural ministry.

The word itself, “multicultural,” communicates the notion that there are multiple cultures, as the Pentecost story reveals to us. This multiplicity is held together by what people from diverse cultures hear — God’s mighty works. The multicultural nature of the world isn’t something to come in some distant future. It’s here in the present, the result of God’s creative power and grace.

But certain ideologies have seduced our church. Among the most prominent is that sociological concept of the melting pot. Central to this idea is that there is one dominant culture (in this case Northern European) into which all others will be blended. There is an assumption that people from racially and ethnically diverse cultures either seek to become like the dominant culture or are willing to give up their own for what they may perceive to be “better.”

In reality, the dominant culture never permits melting. Race, class, gender, age and other socially constructed barriers become reasons for exclusion. The only melting that occurs is based on the power of the dominant culture to decide to “allow” some people from other cultures to be included if they willingly adapt and adopt its values and beliefs.

In other words, the melting pot ideology assumes that other cultures are willing to be assimilated at all costs. The multicultural ministry of the church becomes compromised because a sociological principle determines acceptance, uniformity and conformity. Multicultural ministry becomes more of a fad than the very essence of our faith in a gracious God.

True multicultural ministry requires faith, living into our baptism. Believing that God created the rich human diversity takes us beyond a sociological understanding of human beings.

Along with the Pentecost story and the vision John of Patmos records for us in Revelation, Paul captures this in the letter to the Galatians: “As many of you as were baptized into Christ have clothed yourselves with Christ. There is no longer Jew or Greek (culture/race), there is no longer slave or free (class), there is no longer male and female (gender); for all of you are one in Christ Jesus” (3:27-28).

The late Albert “Pete” Pero, the first African-American Lutheran with an earned doctorate in theology to teach at a U.S. Lutheran seminary, taught that water is thicker than blood. Using the concept of “cultural transcendence,” Pero suggested that all people have a culture, including Northern Europeans. Culture bestows upon each human an identification — one’s roots. A positive nature of culture is that it nurtures us as we encounter the opportunities and challenges of everyday life. But the Christian’s calling is to go beyond culture, which is a struggle between our identification (culture) and our identity (child of God through baptism).

Pero believed that God’s people have the capacity to go beyond culture. Sometimes with humor, he would use examples from everyday life, often describing “cultural transcendence” by using sports. Seeing an African-American basketball player on whose uniform was emblazoned “Irish” going for a shot, he quipped, “Now that’s multicultural!”

Authentic ministry is a process whereby humans embrace all other cultures without losing sight of their own. Learning about another’s culture initiates the possibility of dialogue. So doing inevitably involves conflict, stress and overcoming resistance. Yet that is the nature of what it means to be part of a community of faith (Acts 15) and going beyond one’s identification.

Multicultural ministry also involves naming our sin, both individually and corporately. Human beings sin. Our sin may be practicing racism, employing privilege, denying our cultural roots or becoming confused about our identity. But following our repentance, our loving God forgives and blesses us with the capacity to engage those who are different from us.

Authentic multicultural ministry can’t be an add-on simply because there may be one or two people of color in the congregation. Real multicultural ministry is radically different. It involves the opportunity to engage our discomfort with those who are different so we may grow in our understanding of the mighty works of God in and through Jesus Christ. We are really saved by grace rather than race, ethnicity, class, gender and other humanly constructed barriers. Multicultural ministry implies that on the basis of our faith there is mutual respect and practices that guide our communal life as people of God.

Perry acknowledges the contributions of Albert “Pete” Pero who joined the ancestors in November 2015.


Perry is professor of church and society at the Lutheran School of Theology at Chicago.