Every day nearly 150 ELCA clergy are at work ministering to the women and men of the U.S. armed forces.

“As chaplains we interact with our people in some powerful and unique ways,” said Carl Trost, who has served as a U.S. Navy chaplain for more than 23 years. “We live with our congregations. We’re with them 24 hours a day, seven days a week. It’s an exciting form of evangelism.”

Military chaplains play several roles in the lives of U.S. women and men in uniform, from leading worship and Bible studies at military bases to officiating weddings and funerals to simply lending an ear to those of all faith backgrounds.

Perhaps one of the biggest impacts chaplains have is helping people cope with the unique struggles of military life, including the difficulties of supporting a marriage and family from afar. “Military life is fairly dangerous. There are a lot of pressures,” Trost said. “If our people have healthy relationships at home, then they’re a lot less distracted when they’re doing their job.”

Each branch of the armed services offers paid, chaplain-led training aimed at helping service members communicate with their loved ones and build the trust necessary for lasting relationships.

“We’re not going to be able to change the stress or pressures,” Trost said. “But if we can give couples and families the ability to talk in meaningful ways and to process emotions, they can be supportive of each other.” 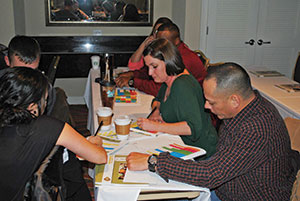 Curtis Sutherland
Terra (in geeen; last name withheld), a retired servicewoman, participated in the Army’s Strong Bonds program with her husband, Thomas (right), who serves in the Army. ELCA chaplain Scott Hagen supervises this regional program for military families in the northeast.

A shared sense of call

When Terra and Thomas (last name withheld) met 18 years ago, she was a member of the Army Reserve and he was making the transition from the Army to the National Guard.

“We just hit it off. I was pretty much the only person he could speak ‘Army’ to,” she said. “We were engaged after six months. Eleven months later we were married.”

Despite their shared understanding of military life, neither was fully prepared for the stresses deployment could put on a family. Terra still remembers Thomas’ first deployment after he re-enlisted in the Army following the terrorist attacks on Sept. 11, 2001.

“At that point we had two small children. I had stopped working,” she said. “Thomas was really itching to go and serve, and I supported him. By June 2004 he was in Iraq. I was figuring out how to manage two toddlers, and he was gone.”

As a military spouse, Terra was able to participate in the Army’s Strong Bonds program, which offers parents, married couples, families and single soldiers opportunities to learn coping and communication skills.

Terra spent a weekend with other military mothers who were also dealing with the stresses of deployment. When her husband returned, the two attended another Strong Bonds event to strengthen their marriage for when he inevitably would be deployed again.

“Whether it be a husband whose head is still in the Middle East or the promises we have to break to our children because of the unpredictability of missions, the marriage events are a good way to bring us back to center and remind us to stick to the core issues,” she said. 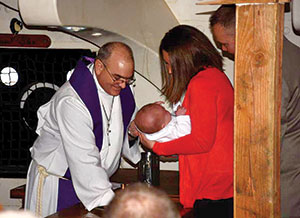 Carl Trost, Navy chaplain, baptizes the child of a sailor stationed on the USS Constitution (Boston). “One of our Navy traditions is to conduct baptisms using the ship’s bell as the baptismal font,” he said.

Trained to live in relationship

“This is not therapy. It’s relationship training,” said Scott Hagen, an ELCA chaplain who supervises the Strong Bonds program in 19 northeastern states. “It’s an opportunity for single soldiers, married couples and families to get some training regarding relationship enhancement.”

Studies have shown that service members who take part in the training experience lower divorce rates than their colleagues, increased commitment to their relationships (whether married or dating), and a decrease in relationship conflict — all of which play a role in the stress they and their loved ones face during deployment.

“The times that a soldier and a family are separated can pull relationships apart,” Hagen said. “It’s critical that couples and families are able to talk, and we teach them specific techniques to do that.”

Equipping military men and women to share their emotions with their families is one of the areas where chaplains are called upon to just respond, Trost said.

For Terra, open communication not only strengthened her family, it reinforced the role the Lutheran faith plays in their life.

“As far as our marriage goes, we don’t know any life other than this one. The chaplaincy and the spiritual programs that are available to us are extremely important,” she said. “They’ve been instrumental in helping us remember that our Christian faith tells us that Thomas is a part of me, and I’m a part of him.”

Sarah Carson
Sarah Carson is an associate editor for Gather, the magazine of Women of the ELCA, and a member of Grace Lutheran Church in Evanston, Ill.