Everett Erickson and members of New Frontier Lutheran would fit into any congregation in Minnesota — they hold pancake breakfasts, debate about the duties of head usher and deal with the usual drama of planning events.

But Erickson and his fellow church members from Midtown, Minn., aren’t real — they’re characters in a radio show created by Diamond Lake Lutheran Church in Minneapolis.

The “New Frontier Lutheran Radio Hour,” led by local theater critic and reporter Graydon Royce, is performed live in front of a packed room of church and non-church members at Diamond Lake each month.

Described as both a variety program and a worship service, each show features music, a monologue by Royce, a guest interview and humorous skits that revolve around the church life of New Frontier members. “The idea was to show people themselves and the kinds of things that really happen in church,” Royce said.

The show came about after Mark Orvick, a pastor of Diamond Lake, began looking for an alternative service that might appeal to those less interested in traditional, liturgical forms of worship. When Orvick proposed the idea of doing a live show, Royce suggested a radio-style program instead.

“It was just too hard to expect people to learn lines and actually stage a production,” Royce said. “Keeping it as a radio show allows you to use scripts, and the logistics are just so much easier.”

Royce initially came up with the idea for New Frontier Lutheran Church in the mid-90s and wrote a column about it called “One Pew Over” for The Bond, the former magazine of Lutheran Brotherhood (now Thrivent Financial). 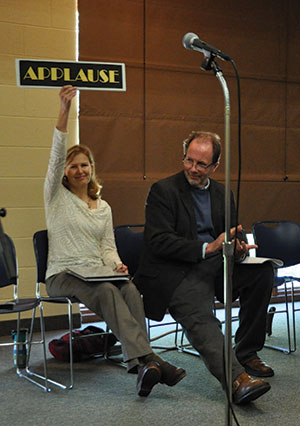 Now Royce and his 12-person team — the majority of whom are Diamond Lake members — get to bring these characters to life in front of a studio audience. Afterward they upload the recording onto the church’s website (www.dllc.org) and iTunes as a podcast.

Then the entire process starts over: cast members brainstorm ideas and give Royce feedback on his early drafts before finalizing the script a week before the show. Next the cast does several run-throughs prior to each performance.

“I’m a really strong believer of using theater in church,” Royce said. “I think it’s a tool that the church doesn’t use enough.” He said the theater and church share a common goal: both seek to bring people together for an experience that is transformative and spiritual.

The show seems to achieve that goal with its audience. It now replaces the church’s second service at 11 a.m. once a month.

“It’s started to take on a life of its own,” said Robb Bass, a cast member. “It’s part of the lifeblood of the church now and a source of pride.”

The writers try to balance comedy with faith in each episode, Bass added. For many, the show’s humor seems to be its biggest draw, allowing even those outside of the church community to relate to the characters and situations.

“The show appeals to anyone who is part of a community and has worked with the absurdities that come up when working with different personalities,” said Sara Peper, coordinator of member engagement at Diamond Lake. “Being able to laugh at ourselves brings us together. Our mission is ‘Inviting All People to a Life in Christ.’ If we can appeal to different groups, we’re reaching that mission.”

For Orvick, the chance for different voices to be heard through the show has been an incredible gift. “Each of those characters has a voice in which they can proclaim the good news,” he said. “It can be in humor or in song, but it gives us more opportunities to touch people through different ways.”

The show has also given them the chance to attract younger generations, such as millennials, to the church. “They don’t necessarily worship like the older generation that was raised in the church,” Orvick said. “Millennials like more variety in their worship diet. We’re finding out that something like this — which has a story — is attracting them.”

Orvick and Royce agree that they would love to see others replicate the show’s model. Orvick said he would like to see it performed for other congregations or synod events since any ELCA gathering would be composed of their target audience.

Though Royce has thoughts of someday live-streaming or producing the show as a webcast, his more immediate goal is to get the scripts published so other congregations can use them.

The show is in no danger of running out of material. Audience members always come up to the cast with humorous ideas. “I think they take a great deal of ownership in it,” Royce said. “It feels great that we can create this experience and the congregation can feel that it’s theirs.”

Orvick said, “Our goal was always to provide another experience. And who’s to define what worship is? If you come and have a good time and hear something that’s moving for you, well that’s worship.”