Editor’s note: In observance of Women’s History Month in March, we remember the ELCA’s predecessor bodies that made history in 1970 when they ordained the first Lutheran women pastors. This article focuses on the experience of women who are pastors in the ELCA. The work of deaconesses and laywomen will be covered in future issues.

The first time Jessica Crist remembers experiencing sexism at church was in seventh-grade confirmation class in 1965. She had remarked that being a pastor sounded like “the best job,” and her pastor had to break the news: She couldn’t be a pastor in the Lutheran Church in America (LCA) because she was female.

“But that made me think that it was a great idea,” said Crist, now bishop of the Montana Synod and former chair of the ELCA Conference of Bishops. “I totally threw that poor pastor who wasn’t expecting that answer. That was maybe his sexism or lack of vision—or maybe it was the whole church’s lack of vision.”

Crist cites the “early foremothers who broke down doors” and endured hardships in their ministry because of their gender as a source of support and inspiration. And although her path to ministry hasn’t been easy (one congregation didn’t extend her a call because of her gender), Crist cites plenty of experiences counter to sexism, including  her election as bishop.

Today 35 percent of some 9,250 active ELCA clergy are women, compared to 21 percent in 2000. In the past five years, 49 percent of those ordained were women. The number of women and men attending ELCA seminaries is about equal. 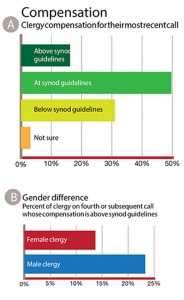 The church is making strides toward equity, according to a spring 2015 survey of 1,243 clergy by ELCA Research and Evaluation. When it comes to equal pay, 49 percent of clergy surveyed are being compensated at synod guidelines (chart A), with no significant difference in pay based on gender. The report also found no significant difference between men and women for length of wait time for their most recent call — 49 percent waited four months or less (chart B).

The numbers tell a different story when it comes to senior leadership. Nine out of 65 synod bishops are women while 86 out of 456 are senior pastors in the ELCA. The 2015 survey found that 23.3 percent of men whose recent call is their fourth or subsequent are paid above synod guidelines, compared to 13.7 percent of women.

“More women need to be thought of for senior pastor positions,” said Norma Cook Everist, a pastor and professor at Wartburg Theological Seminary, Dubuque, Iowa, for more than 30 years. In following the careers of her former students, Everist noticed a trend: “A lot of our women pastors, as they become middle-aged or older, can’t get calls. Thousands of strong, older laywomen serve our congregations. Why not more older women pastors?”

Everist mentors many of the women clergy she taught over the years. A common topic of conversation is concern over threatening male colleagues in ministry. Everist experienced this while studying at Yale Divinity School, New Haven, Conn., and working part-time at a nearby Lutheran church.

“You’re going to be a success and you’re not going to do it here,” Everist remembered hearing from the male pastor she worked with before he asked her to resign.  “Women have been [asked to leave] because they threaten men,” she said. “That continues to be true, and I think it’s true in other professions.”

Although they’ve seen improvements in the experience of women clergy, both Everist and Crist stress that sexism is a systemic issue to which the church is not immune.

In November 2015, the same month during which the ELCA celebrated the 45th anniversary of the ordination of women, the ELCA Church Council adopted a social message on gender-based violence (www.elca.org/socialstatements). This message, Crist said, acknowledges that gender is an important issue for the ELCA. She called for webinars and training to address both racism and sexism.

Growing in inclusion is especially important for the ELCA when it comes to ordained women of color, said Cheryl Pero, a professor at the Lutheran School of Theology at Chicago (LSTC). “The church needs to know that they have overlooked women of color,” she added. “I have people who don’t possibly believe that I could be a Lutheran pastor — and that hurts.” In 1980, Pero was the second African-American Lutheran woman to be ordained.

Pero found hope in working with young seminarians at LSTC: “Millennials have a better handle on this than those who have gone before. If our priorities are going to change, it will probably be because of the ministry of millennials in the church.”

One of those millennials is Stacey Siebrasse, pastor of First English Lutheran Church, Billings, Mont. Growing up she saw women in ministry, but Siebrasse didn’t notice sexism in the church until she saw that the majority of books on her syllabi at seminary were authored by men. Only some books by women were listed — missing completely were those by women of color.

“There have been great strides [for women in the church], but there are still struggles,” Siebrasse said. “Women still struggle to get calls, especially women of color. This needs to be a much bigger concern for the ELCA.”

Since beginning her call, Siebrasse said she’s received frequent remarks about her clothing and questions about her marital status or interest in children’s ministry — comments that would be unlikely if she were male. She would prefer being asked about her passion for faith-based community organizing. Like Crist, Siebrasse thinks ELCA congregations need training and education to combat sexism. She finds support in her women’s clergy group that meets regularly in the Billings area.

Siebrasse sees hope for the future in the number of women training to be pastors. “[The ELCA] is doing a great job encouraging women to become pastors by giving equal opportunities for scholarships, help and assistance,” she said. “I appreciated the [2015] survey, and I feel blessed to be a woman in the ELCA because they are checking up on us. There’s still a long way to go.”

Julian Gordy, bishop of the Southeastern Synod, said his staff is working to nurture and celebrate the gifts of women by being intentional in inviting them to take on leadership roles in the synod and congregations. He acknowledges the ELCA needs improvement but believes “we are getting closer to that place of equality to which God has called us.”

Crist said, “When we as a denomination support women, call out sexism whenever and wherever we see it, that’s the best way to support women as pastors. The reality is that we, too, are created in the image of God. As are each of our pastors and each of our members. Just as you can’t generalize about all men from one, you can’t generalize about all women from one woman. We have great variety in experience and different gifts.”