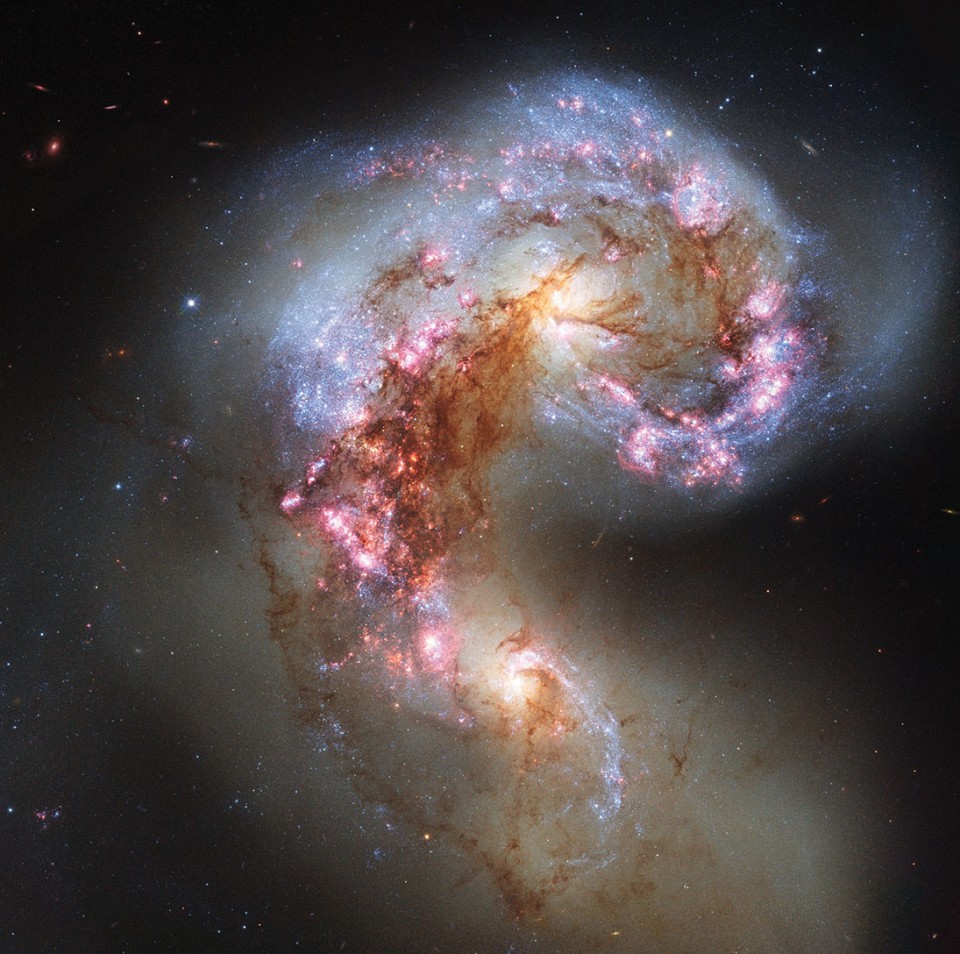 The NASA/ESA Hubble Space Telescope has snapped the best ever image of the Antennae Galaxies. Hubble has released images of these stunning galaxies twice before, once using observations from its Wide Field and Planetary Camera 2 (WFPC2) in 1997, and again in 2006 from the Advanced Camera for Surveys (ACS). Each of Hubble’s images of the Antennae Galaxies has been better than the last, due to upgrades made during the famous servicing missions, the last of which took place in 2009. The galaxies — also known as NGC 4038 and NGC 4039 — are locked in a deadly embrace. Once normal, sedate spiral galaxies like the Milky Way, the pair have spent the past few hundred million years sparring with one another. This clash is so violent that stars have been ripped from their host galaxies to form a streaming arc between the two. In wide-field images of the pair the reason for their name becomes clear — far-flung stars and streamers of gas stretch out into space, creating long tidal tails reminiscent of antennae. This new image of the Antennae Galaxies shows obvious signs of chaos. Clouds of gas are seen in bright pink and red, surrounding the bright flashes of blue star-forming regions — some of which are partially obscured by dark patches of dust. The rate of star formation is so high that the Antennae Galaxies are said to be in a state of starburst, a period in which all of the gas within the galaxies is being used to form stars. This cannot last forever and neither can the separate galaxies; eventually the nuclei will coalesce, and the galaxies will begin their retirement together as one large elliptical galaxy. This image uses visible and near-infrared observations from Hubble’s Wide Field Camera 3 (WFC3), along with some of the previously-released observations from Hubble’s Advanced Camera for Surveys (ACS).

Who are we? What is our place in the cosmos? What is the meaning of life? As humans, we constantly ask these profound questions in one setting or another.

Both religion and science have provided ways to reflect on these questions. And yet, every day stories appear in the news or on Twitter feeds that change the ways we understand who we are and what is meaningful in our lives. All of a sudden we realize that the potential of sciences and technologies to alter and transform the human being far exceeds our ability to deal with those changes.

The human story is moving faster than our species expected. The plot races ahead of us into what seems like a science fiction movie in which we are simply characters on the screen.

We must realize that we aren’t only actors in our story but also, to a degree, the directors. These larger cultural narratives that relate the intersections between science, technology and religion focus our questions about the world and what it means to be part of it. Our goal is to examine the role of the sciences in the life of the church and how they can shape the religious meaning of what it means to be a human in light of these sciences and technologies.

We offer responses to these questions from our backgrounds individually and collectively from the collaborative work we are doing as scientists and theologians at Augustana University, Sioux Falls, S.D., and the Lutheran Seminary at Gettysburg (Pa.). The two institutions received a grant from the American Association for the Advancement of Science to explore how science can be integrated into seminary curricula to help prepare church leaders who are equipped for the discussions that the discoveries of science and technology raise for us in our daily lives.

As Christians we confess that we live in a world created by God. To understand this creation, we need help interpreting the world in which we live.

Why is it important to integrate scientific perspectives in our churches? Because Christian leaders are called to interpret the word(s) of God—Scripture and the “book of nature”—and science helps disclose the composition of our universe that is being continually refashioned by God the Creator. Science is also a creative process, which like religion engages the meaning of life and the broad questions of existence. Science, like religion, is a kind of multileveled story that reveals who we are and our place in the universe. Science helps us realize that what we already know from the creation accounts resonates with the science we are learning.

How do we engage scientific perspectives in our congregational life—in adult forums, in the liturgy, in sermons and in caring for the neighbor? First, we do so with sound wisdom and prudence, according Proverbs: “The Lord by wisdom founded the earth; by understanding he established the heavens; by his knowledge the deeps broke open, and the clouds drop down the dew. My child, do not let these escape from your sight: keep sound wisdom and prudence, and they will be life for your soul and adornment for your neck” (3:19-22).

Second, leaders can extend invitations to scientists from within and outside their congregations to share wisdom about their disciplines and how their scientific perspectives shape their Christian faith and vice versa. Why not a series of adult forums on how the neurosciences shape Christian notions of embodiment, the soul and religious experience?

Third, we can care for the neighbor by helping Christians express their faith through informed engagement with the sciences. College or university and seminary professors can lead students to appreciate realms of discourse and inquiry outside of theology.

Ministerial groups are advised: Be alert to the needs of your neighbor and ask how that neighbor may be helped. How might scientists or health-care professionals provide guidance? How about asking an oncologist to lead discussions with adults and youth about the ways evolution shapes the disease of cancer?

In further response, we reflect on a controversy that occurred in Dover, Pa., just over 10 years ago. Some clergy of various denominations in the Dover area didn’t publicly support insights from evolutionary science throughout the travails that racked the community around the teaching of “intelligent design” in its public schools. They feared doing so would further upset their conflicted communities.

But things changed after the pro-”intelligent design” school board was voted out by Dover townspeople and evangelist Pat Robertson subsequently announced, “I’d like to say to the good citizens of Dover: If there is a disaster in your area, don’t turn to God—you just rejected him from your city!” His suggestion didn’t go down well with these pastors. Why? We think it’s because they—like all good pastors—loved their flocks and would defend them from any disaster, including godforsakeness.

Similarly, we suggest that when bad science is promulgated, it can visit disaster upon the Christian community in many ways—in the forms of bad medicine or bad environmental science. Inviting the insights of scientists is part and parcel of good pastoral practice.

Through our work thus far, we have discovered it’s a privilege for seminaries and other pastoral educators to foster alliances between faith and science. As we look for areas in which insights from science may serve the world, we are helping all Christians reflect more deeply upon God’s marvelous creation. We join with all who seek faithful and fruitful ways of living together on this planet we call home. Areas where we might join hands include environmental concerns, genetic counseling, medicine and health care, and agricultural practices.

The ELCA social statement “Genetics, Faith, and Responsibility” suggests that in order to face our futures we must have both “learned pastors and learned congregations. The Lutheran tradition has a long history of preparing leaders who are learned in the general education of sciences and the humanities. Our church urges leaders and encourages all members to seek a working knowledge of the natural world through the physical sciences, and to seek knowledge of the forces that shape society through the social sciences” (www.elca.org/socialstatements).

This is exactly what we hope to accomplish through this joint partnership between a seminary and university. Grateful that “the earth is the Lord’s and all that is in it” (Psalm 24:1), we seek to incorporate the best that science can offer with the best that theology proclaims. M

“Jesus on the brain” by Dawn Rudman explores how children’s exposure to church music may shape their neural connections (The Lutheran, November 2015).

“Do science and religion conflict? It’s all how you ‘see’ it” summarizes Pew Research Center findings that highly religious Americans are less likely than others to see conflict between faith and science (The Lutheran, December 2015).

Leonard Hummel
Hummel is professor of pastoral theology and care at the Lutheran Theological Seminary at Gettysburg (Pa.)