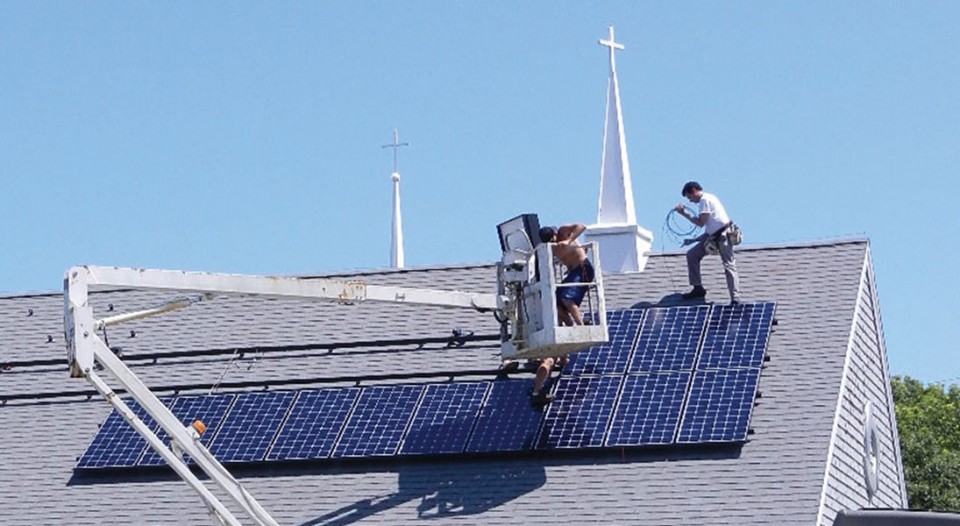 St. Peter Lutheran, Harwich, Mass., is known in the area as the “church with solar panels.” Tiffany Nicely Holleck, pastor, said, “We are stewards of [creation], and we need to do what we can.

The time has come, James White believes, for Lutherans to engage in a new type of evangelism.

As a professor of geological sciences and environmental studies at the University of Colorado Boulder, White researches climate change and its potential implications for humanity. As an ELCA member, he knows Lutherans can lead the charge to make their communities and world more sustainable.

“If you put your light under a bushel, it isn’t going to work,” said White, who attends Trinity Lutheran Church in Boulder. “People of faith need to stand up and say, ‘No, the direction we’re going is not the direction to go.’ It is our faith and our knowledge of what God wants us to do that drives that.”

For its part in the sustainable effort, the ELCA announced its support for the Paris Agreement, a worldwide accord reached at the U.N. Climate Change Conference this past December.

Though climate change is a global issue, it doesn’t only require global solutions, White said. There are plenty of ways to make an impact locally.

“We need to recognize it’s not an insurmountable problem,” he said. “You have to have some faith that God will provide, but you also have to recognize that with free will comes responsibility.”

A mindset of greenness, generosity

In Harwich, Mass., an ELCA congregation is actively addressing climate change. To its members, the building is known as St. Peter Lutheran Church. To non-members it’s “the church with the solar panels.”

In 2011, St. Peter installed two large solar arrays on its roof, facing the sun—and the nearby highway. Drivers often saw the panels and came into the building to comment on them.

For members it was a chance to discuss energy efficiency and the faith-based foundation for it.

“We were able to say, ‘God created this beautiful earth and we are stewards of it, and we need to do what we can,’ ” said Tiffany Nicely Holleck, pastor of St. Peter along with her husband, Christian Holleck.

In 4½ years, the panels have produced about 150,000 kilowatt hours of energy, reducing emissions at a level equivalent to driving 250,000 miles in a standard car. St. Peter has no electric bill and receives energy credits that can be donated.

The planning process was complex, but St. Peter has taken simpler sustainability steps too. They reduced paper consumption by using a “seasonal bulletin” with one reusable handout and a small insert that changes weekly. Plastic communion cups are recycled. Members hosted a community vacation Bible school where children decorated recycling bins for their home congregations.

These efforts have resulted in St. Peter embracing a mindset of greenness and generosity. “It helps you to think very carefully about your place in the world,” Nicely Holleck said. “[We] know what we do matters locally but also has Earth-wide ramifications.”

Water and the word

Caring for creation has long been a focus for the Minneapolis Area Synod. In 2014 it aimed to increase environmental efforts. Enter the EcoFaith Network MPLS, a new initiative to build green-focused leaders throughout the synod.

“There was so much interest around environmental justice, but people were feeling siloed and disconnected,” said Emilie Bouvier, the network’s congregation organizer. “By coming together, we could share resources and support so we could have a more united voice.”

Bouvier talks with congregations about their sustainability ideas and goals, sharing stories of what’s worked elsewhere or developing new solutions (like helping one figure out how to use local bread and wine for communion).

A primary effort has been helping congregations make property improvements. Through the synod’s new energy-efficiency loan fund, congregations can borrow up to $10,000 and then repay the balance from their energy savings.

Water also has been central, given its importance in the “Land of 10,000 Lakes” and in the Lutheran tradition. At a watershed district, the network hosted worship and a workshop on local water sources and how to better care for them.

The experience helped congregations break down a “global problem into a manageable bite for people and created a way they can work together to really have impact,” said Bob Hulteen, the synod’s director of communications and stewardship.

St. Thomas Lutheran Church in Bloomington, Ind., has been thinking about sustainability since the 1980s when it stopped using plastic foam products and had members bring their own coffee mugs on Sundays. They’ve been using—and recycling—recycled paper for 25 years, and serving fair trade coffee and tea for 13 years.

In six years, St. Thomas said it reduced its electricity consumption by 46 percent and natural gas use by 15 percent.

Lately they’ve taken bigger steps to be environmentally friendly. They moved offices scattered throughout their building into one location to save on utility costs. They installed an on-demand water heater, improved the building’s insulation, bought energy-efficient appliances and switched to LED lights in the sanctuary.

The congregation also helped form Hoosier Interfaith Power and Light, a cooperative effort to promote renewable energy and energy efficiency. Using a state grant, a solar panel array was installed that provides two-thirds of their electricity.

“We’re called by Scripture and our God to make careful use of God’s gifts,” said Lyle McKee, pastor of St. Thomas since 2004. “We have to overcome the horrible history we have of abusing creation.”

There are practical benefits too. Saving $4,000 to $5,000 a year on energy helped St. Thomas pay two seminarian interns, eventually calling one to focus on youth ministry.

“This,” McKee said, “was absolutely the best missional investment available to us.”