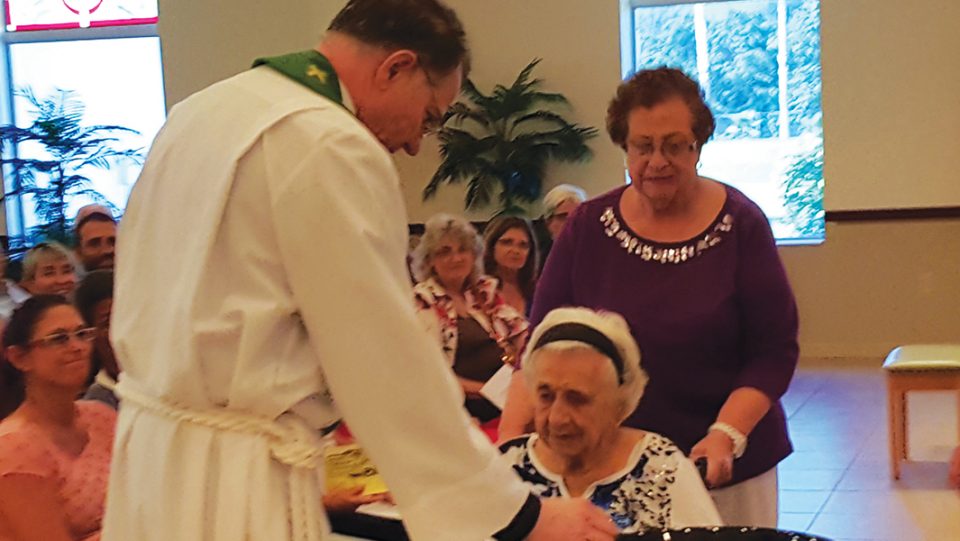 Helen Gallik Abelt was baptized at the age of 100 on Nov. 1 at New Life Lutheran Church in Sarasota, Fla.

Helen Gallik Abelt moved to Sarasota, Fla., in 1959 with her second husband and two foster daughters. Not long after the move, her husband left the family. With no nearby relatives, Abelt was faced with raising the children on her own.

It was a trying time, but Abelt, a former World War II riveter, did what any self-reliant woman might—she got to work. “I got an ice cream business and that was real good. With that, and with other jobs I could get, I made a good living,” she said.

Years later, after the girls had grown up and moved away, Abelt found herself alone in Sarasota. It had been difficult to keep close ties with her family in Ohio, and she didn’t have many close friends. An impromptu visit in 1980 from her nephew, John Galik, changed that.

Galik’s work with Lockheed Martin brought him to the area periodically, and through monthly visits the two reconnected. A few years after his retirement, Galik and his wife, Shirley, began spending their winters in sunny Sarasota. Abelt finally had family nearby.

“As time progressed, she got really involved in our lives,” Galik said. She watched them square-dance and eventually joined them for worship at New Life Lutheran Church in Sarasota.

Abelt, who didn’t grow up in a Christian home, was unfamiliar with the words and music she encountered that Good Friday in 2014. “Her first remark was, ‘Wow,’ ” Galik said.

On each subsequent visit, members of New Life got to know and call “Aunt Helen” by name, and “suddenly her circle of friends exploded,” he said.

For Abelt, church meant being in a place where “you’re wanted and it makes you feel good that you’re not alone.”

‘It makes you feel tremendous’

A few days after she celebrated her 100th birthday in 2015, Abelt lost her eyesight. She spent the summer with the Galiks at their home up north.

Back in Sarasota that fall, another surprise was in the works. The subject came up on a Friday. Galik recounted: “I said, ‘Are you trying to tell me you’d like to be baptized?’ She said, ‘Yes, can we do it Sunday?’ ”

Galik emailed his pastor immediately. “It was a surprise for me,” said Bill Stehr, New Life’s pastor, who booked the baptism for that Sunday. “For her to come to know Christ largely through her nephew and she decided to be baptized—it’s like a miracle.”

On Sunday morning, Nov. 1, at the age of 100 and accompanied by a cluster of children at the font, Abelt was baptized. Afterward, members gave her a standing ovation. “I never expected it right there in church. It makes you feel tremendous,” Abelt said.

Galik’s role in his aunt’s baptism wasn’t lost on him. “To tell you the truth, I think God gave me this job,” he said.

Today, Abelt is still reveling in her baptism. “I would do it over and over again,” she said. “It makes you feel happy and wanted and like you belong.”