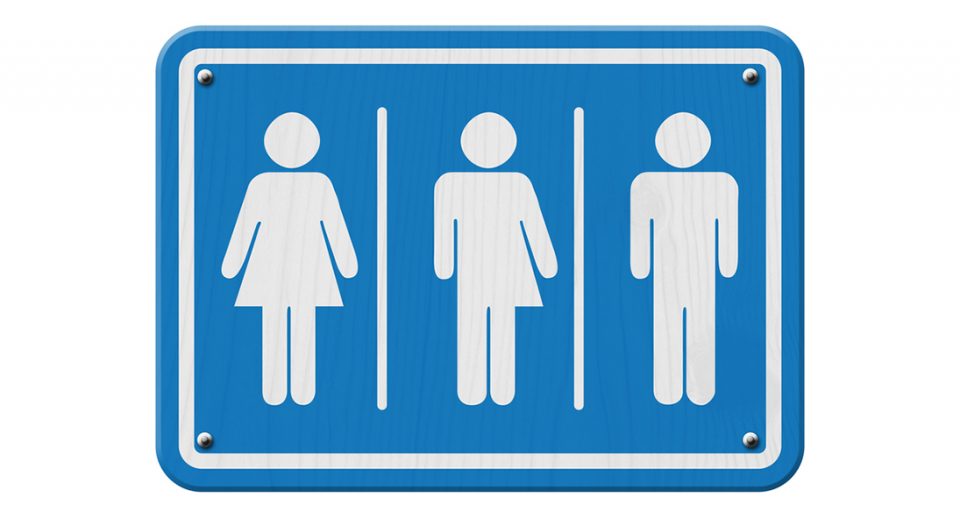 On a trip overseas, I had a long layover in the Netherlands, so I spent a day in Amsterdam. I was amazed to see what at first glance appeared to be open phone booths on the corners—iron affairs painted green that were aesthetically pleasing to the eye. My guide smiled and said they were for men who imbibed too much Heineken and needed relief. “Ohhhhh, I get it—an outdoor urinal!” my jet-lagged brain realized. It never occurred to me to actually try the thing out, because I was used to American public bathrooms—you know the kind—silhouette of a guy on one door, silhouette of a woman (or a Scottish guy in a kilt) on the other.

All these years I have been using public restrooms, standing next to complete strangers, without ever once worrying about who they were or why they were there. According to lawmakers in North Carolina, however, I’ve been endangering myself and my children by exposing ourselves (no pun intended) to horrible predators whose sole purpose in not conforming to gender was in order to do nasty things to people in the potty at Target. Really? Pardon my incredulity, but this takes the (urinal) cake.

Sexual predators are real, and the statistics about just how many of our children experience harassment or outright assault from adults (usually relatives or friends of the family) are horrifying. My wife and I have had intentional conversations with both our son and daughter about safe touch, cyber-predators, over-affectionate parishioners, and so on and so forth. But never once did it occur to us that a transgender person would be transgender in order to go into the “wrong” bathroom for perverted reasons. Folks, we need to sit up in our seats and pay attention, because this whole thing is what Jesus accused the Pharisees of when he said they strained at gnats and swallowed camels.

First, let’s deal with the reality of sexual predation. According to a recent article in the Huffington Post, a coalition of 250 organizations working with victims of domestic violence and sexual assault have flatly denied any correlation between sexual violence and the bathroom needs of LGBTQI people. There’s absolutely no evidence to suggest that non-heterosexual people are using the “other bathroom” as an excuse to recruit, defile or assault. Sad to say, our children are more likely to be harassed or abused in a church setting by heterosexual men, which is part of our broken history that needs to be recognized and prevented in the future. Simply put, there is no correlation between pedophilia and transgender human beings.

Second, it might help for us to understand that our hetero-normative notion of gender is something based on sociology, not physiology. In her 1990 groundbreaking work, “Gender Trouble,” Berkeley Professor Judith Butler proposed that all our preconceived notions about what make us feel like a man or a woman had little or nothing to do with our physical attributes, but more with how society and culture creates the perception that boys look one way (and behave one way) while girls look different (and behave differently). But wait—what about those children of God whose bodies seemingly indicate one gender while they themselves identify as the opposite or something in between?

Transgender people have been part of the human narrative dating all the way back to ancient Egypt. In 21st century America, they face discriminatory practices at school, work and in the church. The term “transgender” is actually an umbrella term that has little to do with sexual orientation. It is not used to describe intersexual people who are born with characteristics that are associated with both male and female gender. It encompasses folks who seek to transition from one set of physical attributes to another in order to match their bodies with their identity. It also encompasses those people who self-identify as neither male nor female. And folks like this live and work and worship among us all the time. Our culture is only now beginning to understand the gifts they bring to the table.

So the next time you are in a Target restroom and a male member of the American Family Association barges in to prove a point, make sure your stall door is closed, and pray for them and all other folks who are caught up in the irrational thinking that fear produces. Martin Luther used to pray in the outhouse all the time, so you’re in fine company. Also, if you happen to be in Amsterdam, you should definitely take a picture of an outdoor urinal, especially if the person using it is wearing those pointy wooden shoes.