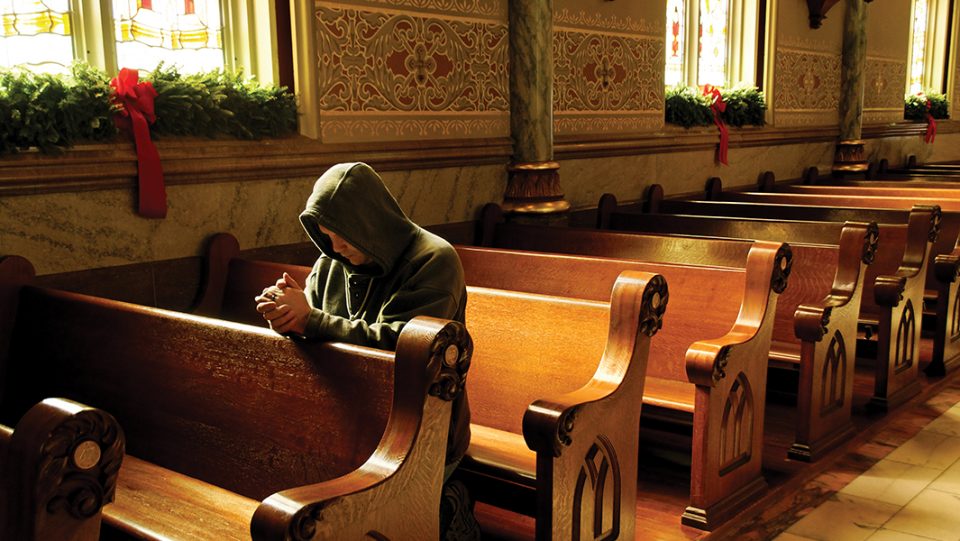 Staff Sgt. Dan (last name withheld), a National Guard member, was called to active duty in the Middle East during a tough time in his life. His marriage was on the rocks, and it got worse after deployment.

“It wore on me more and more, and after awhile I got into a deep depression,” he said. “I started to think about suicide. When [actor] Robin Williams died I was jealous that he was out of his pain and I was still stuck in a mess.”

After his 12-hour night shift and regular workout, Dan was drawn to music coming from the base chapel. As worship started, “they sang about love and it made me feel worse,” he said. “I could hear my children laughing, and I was scared that I would never see them again.”

Dan, who works in a prison back home, listened to the story of Paul, who was imprisoned for preaching the gospel. The part that really stuck with him, he said, was when “an earthquake flung the jail doors open. The jailer drew his sword to kill himself. Paul shouted, ‘Do not harm yourself!’ ”

“[That passage] hit me like a ton of bricks,” Dan said. “The music led me to hear about a jailer who was so overcome with grief that he was about to kill himself.”

He knew then that he was headed in the same direction as the jailer and needed help.

Each year in the U.S. more than 40,000 people die from suicide compared to 16,000 from impaired driving and 15,000 from homicide. Suicide is growing among all races, classes and ages, including the elderly and middle-aged men. It’s the second leading cause of death for those age 15 to 34. The U.S. Department of Veterans Affairs estimates 22 veterans die each day by suicide.

Eric Wester, ELCA director for federal chaplaincy, has spent 32 years as a U.S. Army chaplain and knows too well that the risk is high for veterans and soldiers in active service. “At the time of our highest operational tempo in the military, commanders and military leaders of all ranks were alarmed at the increasing rates of suicide,” he said.

For the past decade, the military has emphasized suicide prevention to provide awareness and skills to help people identify their risks or help others. “Chaplains are viewed as the first line of engagement because we have a confidential relationship with military members and their families,” Wester said. “In that way chaplains create a safe space to talk.”

Talking about suicide in safe, appropriate ways lowers anxiety, opens doors and allows people to know they’re accepted, said Sherry Bryant of the Lutheran Suicide Prevention Ministry. A member of Our Saviour Lutheran Church in Naperville, Ill., she is an activist motivated by experience—her son took his life in 1993.

People often don’t disclose that they are suffering from these issues, even in congregations, she said. Lutheran Suicide Prevention Ministry offers resources for clergy and others who want to do adult education. “What we want to do is bring this issue to the forefront, reduce the stigma and enact the recommendations of the ELCA messages on suicide prevention, mental illness and depression,” Bryant said.

Hope in the gospel

“Communities and congregations need to become comfortable talking about suicide and not just sweep it under the rug,” Swanson said, emphasizing open and honest communication.

When he went through seminary, there wasn’t much training on suicide prevention, yet Swanson said it’s an issue all chaplains confront in the field.

“God has a purpose for all of our lives. It’s unfortunate people get to a point sometimes where they don’t see that anymore,” Swanson said. “They’re in a lot of pain and they want that pain to stop. If we can get people through the crisis, then often people move beyond that to lead healthy and productive lives.”

Capt. Kristin Swenson, an ELCA chaplain at Dan’s base, was there to help bear his burdens when he sought her out.

“I told [Swenson] that I was overcome with grief, fear and burden, and that I was thinking of killing myself and I didn’t know what to do,” Dan said. “She told me there’s a way of life available to me where you don’t have to bear the shame and burden anymore. She told me about forgiveness, grace and Jesus. She introduced me to the Bible.”

“You don’t have to be a mental health professional to reach out and save lives,” said Sherry Bryant of Lutheran Suicide Prevention Ministry. If you or anyone you know has thoughts of ending a life, call the National Suicide Prevention Lifeline at 800-273-TALK (800-273-8255).