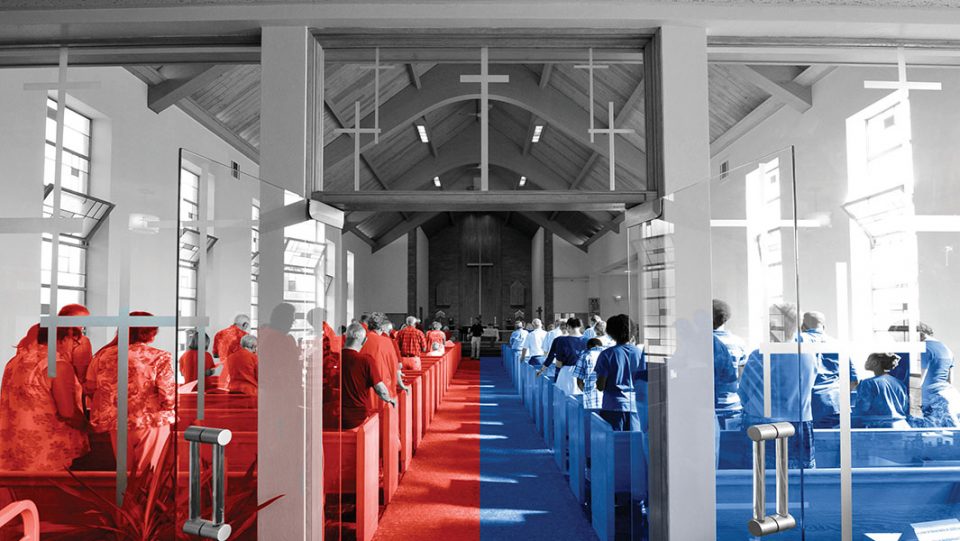 Photo illustration doesn't reflect the political views of those pictured.

Clarence Darrow, arguably one of the most famous attorneys in the 20th century, wrote an article for Esquire titled “How to pick a jury.” Here’s my favorite quote: “Beware of the Lutherans, especially the Scandinavians; they are almost always sure to convict. Either a Lutheran or a Scandinavian is unsafe, but if both in one, plead your client guilty and go down the docket.”

His wit was rapier sharp and though the words seem quaint and humorous today, his assessment regarding people of faith was withering and reductive then.

In this election year, we’re in the jury box once again, being asked as citizens to choose our next batch of public servants. As Lutherans, we rightly rail against the idea of the church hierarchy instructing us how to vote. It’s in poor taste and unconstitutional (and merits the loss of our tax-exempt status).

As a pastor of seemingly good conscience, I find myself in the position of bringing the gospel to bear on our discernment process without actually endorsing a candidate. I have a favorite, of course, but I would betray the covenant of my ordination if I were to share this opinion from the pulpit.

Once in a great while, however, a candidate comes along who manages to strike a nerve among people, using rhetoric that maligns others and categorizes people according to issues of race, nationality, religion and so forth. Our temptation is to dismiss or ridicule the candidate and his or her supporters, which lowers us to their reductionist standards.

This year’s election process has such a candidate. Like Darrow, he freely shares his opinions about others, painting them with a painfully broad brush, reducing them to the worst possible stereotypes. Years from now, history will probably paint him as a showman whose charisma and vapid policy points could whip crowds into a frenzy. His words will seem quaint, even humorous. Today, they are nothing short of incendiary.

As a pastor it’s not for me to tell people how to vote, but what about candidates who stir up hate and fear, directly contradicting the message of our Lord Jesus Christ?

The church is called to refute those movements that seek to harm others. Jesus shows us time after time that he stands in solidarity with the outcasts and the disenfranchised. Being the church is about being called to discern, witness and act appropriately when the rhetoric of fear threatens to stifle the good news of God’s reign, whether in the voting booth or in backyard conversations with our neighbor. Our silence during such times of fearmongering is all too often interpreted as complicity.

Let’s revisit Darrow and his lopsided view of Lutherans for a moment. Some of us may fit this description. Some of us—hopefully most—do not. The flaw in Darrow’s seemingly tongue-in-cheek rhetoric was that he associated attributes to an entire group based on one or two defining characteristics. We are Lutheran, ergo, we will find the client guilty. I won’t deny my Lutheranism, but I will get my dander up if anyone makes an assumption about me based on my baptism. Labels are highly dangerous. They can be used to dehumanize and ostracize.

This isn’t to say we should ignore differences. They exist, thanks be to God. The world is a dappled place where innumerable cultures, beliefs, ethnicities, orientations, affiliations, folklore and traditions glorify God with their varied splendor.

Because of sin and our human brokenness, however, we fall into fear from time to time. Yes, individuals among us do awful, horrible things to others. This is no basis for assuming that others who fit the same description are going to do the same.

We draw lines in the sand and build walls in our hearts. Or, as we used to say in confession, “We deceive ourselves, and the truth is not in us.” This is a sickness that leads to xenophobia, racism, disenfranchisement, gender bias, exploitation, objectification and, ultimately, condemnation. It is a sickness that is most dangerous when it infects people who have the means to create a public agenda.

David Wellman, a professor at the University of California, Santa Cruz, defines prejudice as “a system of advantage based on race.” It’s the collective voice of prejudice in society that causes corruption in all aspects of our public policy and discourse.

The church can and must counteract this sickness with words of reason and compassion. This is what it means to speak prophetically, and we must continue to do so until the prophetic word becomes the normative word at home, church and in the elected office.

Consider these words from 1 John 4:18: “There is no fear in love, but perfect love casts out fear; for fear has to do with punishment, and whoever fears has not reached perfection in love.”

Many of us are wrestling with fear, the world around us seemingly on the verge of chaos. The omnipresent media is delivering messages that play to our anxieties. It’s good for ratings, but bad for the better angels of our nature.

The writer of 1 John also exhorts us to “test the spirits” in order to discern whether voices speak truth to power or cower behind false prophecies. We must discern and act according to our hope in Christ, not our fear of death. Though we might not see it clearly, God is turning the world around, and love will have the final word. Thanks be to God.

Called to prayer: For resources to help us heed our call to conversation and prayer around our role as U.S. residents and as people of faith in ensuring our election systems promote dignity and respect for all, visit elca.org/Our-Work/Publicly-Engaged-Church/ELCAVotes.

Beware of the Lutherans (study guide)
Labels have their place. Grocery stores, for instance. A good label gives you information that helps you find the best product to meet your nutritional needs or to satisfy your appetite. But labels aren’t so good for human beings, who defy uniformity of standards and description. God made us individuals in all our wonder and diversity. Can we appreciate that better?
Download Now