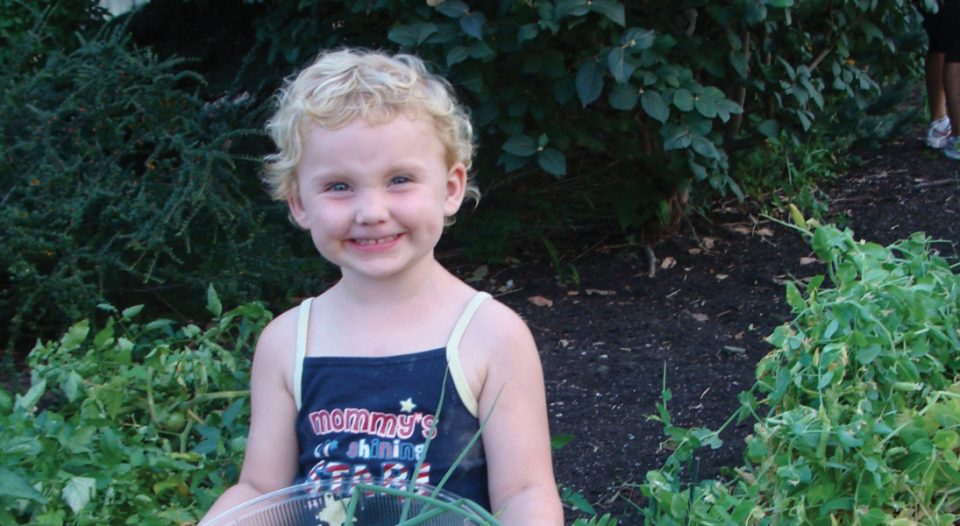 About 15 years ago, First Lutheran Church in Bryan, Ohio, decided to take stock of itself. Emily Ebaugh, a member since 1984, remembers the re-evaluation process well: “We asked ourselves, ‘Why are we here, specifically, at the corner of Cherry and Bryan streets?’ ”

Out of that soul-searching came a commitment to “fling our doors wide,” Ebaugh said. The congregation, founded in 1875, decided to focus on serving its immediate neighborhood, which is home to many lower middle-class working families.

Although First now reaches out to the community in myriad ways, the Food and Fellowship program, co-directed by Ebaugh and Betty Franks, wife of First’s pastor, Richard Franks, has become a cornerstone of its outreach.

At the time the congregation was re-evaluating its mission, it ran a tiny food pantry that was basically a cupboard in the hall with food. In 2003, as part of its new commitment to the community, First applied for an ELCA World Hunger grant to beef up this pantry. The congregation received $3,000 through the domestic hunger program to launch Food and Fellowship, which has continued to receive ELCA grants over the years.

Food and Fellowship is one of several pantries in the town of about 9,000 residents. While the typical pantry might allot users an assortment of canned and boxed items, First offers a choice of fresh fruit and vegetables, along with fresh and frozen meat. Allowing users to make their own selections empowers them, Ebaugh said, and helps ensure that food is used and not wasted.

Her son, Bronson Ebaugh, and his wife, Nayadet Ortega Perez, operate the pantry. Both speak Spanish as well as English, making them well-suited to serve the diverse community.

The pantry has gained many community partners along the way, including Trinity, Bryan’s other ELCA church. The county’s United Way contributes personal care items like soap, toothpaste and toilet paper. Groups such as Farmers and Hunters Feeding the Hungry, the Wild Turkey Federation and God’s Acre also donate food and funds.

The Food and Fellowship program is about much more than distributing food, however. With funds from ELCA World Hunger, the congregation also began a Sunday supper series, which nourishes not only bodies but minds and spirits as well. First invites people from the neighborhood to help prepare and enjoy the nutritious meal. Afterward a speaker leads a program that often focuses on health and nutrition education.

Inspired and assisted by one speaker, the congregation planted a community garden, which supports its food pantry and is an educational tool.  Zumba and yoga classes are also offered at no charge throughout the week to encourage physical activity.

The Sunday suppers are a great thing, said Jason Williams, who has been participating with his family since the program began. He and his wife, Mindy, volunteer as cooks/food preparers and have been enthusiastic evangelists for the program, which benefits members and non-members, Williams said. A church council member, he loves seeing members and friends getting together to enjoy the evenings.

First is always looking for outreach opportunities and is proactive about meeting people where they are, Ebaugh said. Using the connections made with the food pantry, the congregation invites people to participate in First’s other programs.

“One of the most rewarding things is that people who are not traditional churchgoers, who might not feel comfortable in a more formal church setting, have done Bible studies as part of the Sunday supper program and even taken communion in that setting,” Ebaugh said. It’s gratifying when these people eventually become comfortable enough to enter the sanctuary for worship, she added.

One of those residents is Julie (last name withheld) who joined the congregation by way of Food and Fellowship. When the program started, her daughters were part of First’s tutoring program, a connection that led to an invitation to the suppers. Julie would also occasionally make use of the food pantry, which was a godsend, she said. Her positive experience with the program led Julie to attend the regular Sunday morning services.

Julie is now an active member who has found her niche in helping prepare communion, and she’s even started a vegetable garden with the knowledge from First’s programming.

The congregation’s commitment to embracing its neighborhood didn’t happen without a few growing pains. Ebaugh said the effort required members to get outside of their comfort zones and accept that the ministry might get messy and loud at times.

“Part of the process has been educating our traditional members that not everybody coming to church today is going to look like them or act like them, and that’s OK,” she said.

As First has become increasingly inclusive, members have learned that old-school communication methods considered tried-and-true, such as mailing postcards a few weeks in advance of an event, might not be enough. A phone call, text or Facebook message might be the extra nudge that gets someone to participate.

The results have been worth the effort, and the Food and Fellowship program continues to thrive. “This ministry has been transformational to our church,” Ebaugh said.