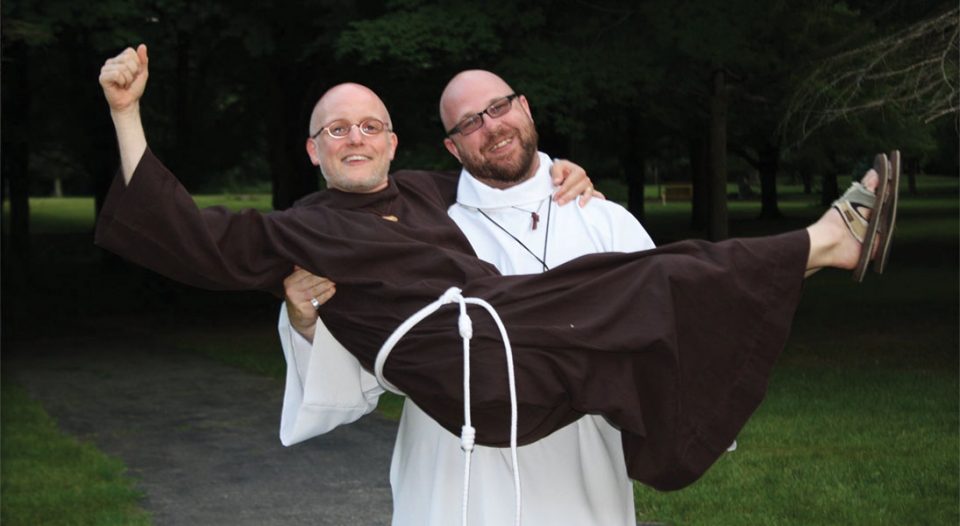 Five years ago this summer seven Lutherans who had never met face-to-face serendipitously walked into the constituting meeting for the Order of Lutheran Franciscans (OLF) unsure of whether the order would really take off. After three days, they walked out together, too, with a shared dream for the order.

“Many times I’ve called it a miracle. We walked into the meeting hall from all over, at the same. It was uncanny,” said Brother Joseph Byrd, the order’s minister of formation.

The OLF may be relatively new, but it dates back to the friars of the Middle Ages. St. Francis of Assisi was a mendicant friar (those who give up worldly possessions) and founder of the Franciscan movement.

“It’s the largest movement in the history of Christianity, and we’re just a part of it,” Byrd said.

When the OLF was formed, Brother Christopher Markert, its minister general, said he expected only five to 12 would be part of the community. In five years, the order now has roughly 40 brothers and sisters at varying stages of formation and membership:

These 40—from young adults to retired folks—make vows of poverty, chastity and obedience, but they don’t live cloistered. They are dispersed throughout the United States and abroad, including China, Norway, Canada and South America. The order’s base of operations is in Houston.

More than half are married, including Byrd and his wife, Sister Grace, who is a full-time musician in the Kalamazoo, Mich., orchestra.

As the first person who communicates with those making inquiry, Byrd said the three things he usually makes clear are: “We’re not monks, we’re friars—brothers and sisters. We’re not cloistered. And we’re not celibate—we make a vow of chastity.”

They do wear habits, depending on their vocation. Byrd wears his when at his job as a spiritual director at the local prison and to teach. “I don’t always wear it to the grocery store,” he said with good humor.

Markert, director for evangelical mission with the Texas-Louisiana Gulf Coast Synod, came out of the Order for Ecumenical Franciscans (OEF). The OLF is “ecumenical in spirit,” he said, joining with other Franciscans and Christians whenever possible.

The Lutherans also draw from similar orders in the Roman Catholic and Episcopal traditions, but they claim the ELCA Confession of Faith. Markert’s vision of what the community could be was shaped by living at an Episcopal priory with Benedictines and at the Philadelphia Motherhouse of Deaconesses.

After being with the OEF, he began to wonder why there wasn’t an authentically Lutheran voice at the Franciscan table, as existed among Roman Catholics and Episcopalians. After sharing his concern with fellow Franciscans and discovering that Lutheran orders have existed for decades in Europe, he felt called to lead the movement that included a general rule, bylaws and an affiliated relationship with the ELCA. These documents and objectives were approved by that first gathering of the community in New Orleans.

The order’s four foundations are to accompany the poor and marginalized, build ecumenical bridges, care for creation and provide spiritual renewal in the church (a majority of the brothers and sisters are spiritual directors).

“ ‘What do you Lutheran friars do?’ is a question we often get,” Markert said. “But it’s not the right question. It’s not about what we do, but about who we are. Our Franciscan calling flows from our baptismal calling. We are seeking grace and celebrating grace in our lives. … Moving back into simplicity, walking with the poor as children of God, celebrating the church beyond who we are as Lutherans, caring for creation, finding beautiful and bold ways of being Christian.”

When she entered the door to the New Orleans gathering with the others, Sister Heather Ryniker had been searching for an ELCA congregation that was the right fit. What she found at the meeting was a community that keeps her grounded and shares her values.

Ryniker is in charge of the order’s finances and works as director of finance and business at Good Samaritan Community Services in San Antonio. She entered the Franciscan “life profession” stage three years ago.

Religious orders have much to offer modern society, she said, because we’re rife with individualistic nature. “That’s why the new monastic movement has become popular,” she added.

“Having a rule of life is beneficial to me,” she said. “I need that consistency and order. Life around me is changing. The rule I follow keeps me grounded, reminds me that I’m not in charge.”

Ryniker was attracted to the Franciscans because of what she learned in formation: “St. Francis didn’t just sit around and analyze or form a committee—he just went out and did it.”

Byrd has much to say about St. Francis (and Clare of Assisi), as well. He believes the OLF is part of the current “great upheaval” described by theologian Phyllis Tickle, who wrote that Christian reformation is a pattern that occurs every 500 years.

When he says he has “the fantastic task” of being the first person to field inquiries from all around the world and walk with postulants in their first steps, his gentle, joyful voice is convincing.

“They’re really seeking an experience of God as opposed to just an idea about God. Ideas about God are important, theology is great, but it can only go as far as it’s supposed to …,” he said. “A lived experience is what people are seeking. They don’t always have the language for it, but maybe a nudge or feeling and no idea how to live that out.”

The irony that this order is rooted in the Middle Ages and is now formed and connected by modern technology isn’t lost on the friars. The order’s page can be found at lutheranfranciscans.org.

The internet, Byrd said, can be scorned or blessed. “The Franciscans are poised to help the world grow in how the internet can bless, open and create relationship, even though we’re a dispersed order,” he added.

The OLF has a cloistered Facebook group in which they share with one another how they’re living out their ministry, post prayer requests and help one another in the Franciscan walk.

They also meet annually in person, not just in retreat but with a business meeting, learning, and daily eucharist, vespers and compline.

Younger people, especially, are looking for a method that’s old and trustworthy but might be framed in a new context, Byrd said. The movement is messy, he said, but that’s part of being a Franciscan.

“One might think that vowed life would be restraining, but it’s quite the opposite,” he said. “It invites me and others into more freedom, which is God. Is it easy to get there? No, but it’s not supposed to be. There’s joy in the process, and if there isn’t, it’s not Franciscan. Francis couldn’t stand a gloomy friar. Your whole life changes, and that’s not comfortable for everyone around you, but it’s worth it.”

Those in the OLF:

My faith journey: From grief to belonging

Filled with the Holy Spirit