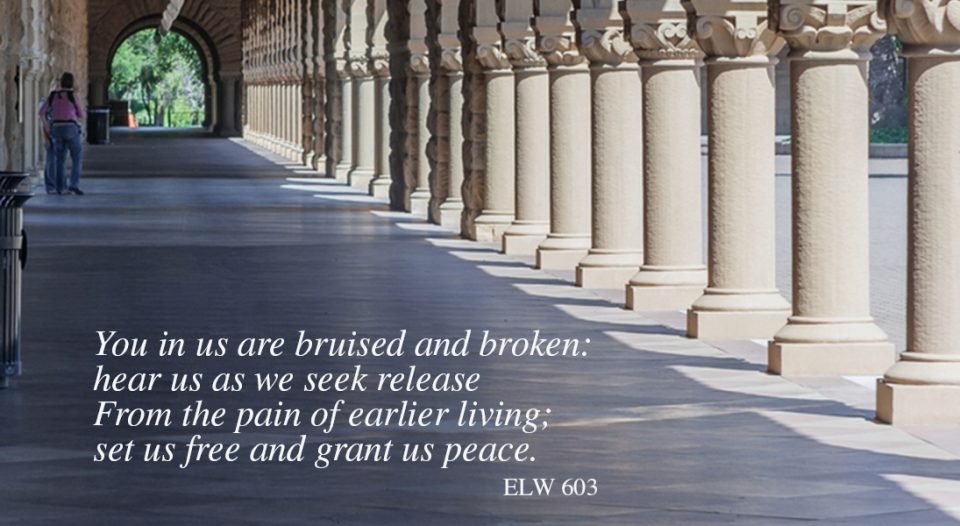 You in us are bruised and broken: hear us as we seek release
from the pain of earlier living; set us free and grant us peace.
“God, When Human Bonds Are Broken” ELW 603

Every media source is displaying the face of Brock Turner, the rapist who until recently was a student at Stanford. Social media is erupting with vacuous public rants about the brutality of the incident and the lack of severity in Judge Aaron Persky’s sentence. And the victim in all of this, who shall remain nameless, has dared to lift her voice in an unprecedented statement that I hope will become a staple of assigned reading for college freshmen in years to come as this American culture owns and seeks to exterminate the trend where women are objectified and sexual conquest is an admirable attribute of a “real man.”

While those around the rapist continue to extol his virtues and question the morals of the victim, Americans continue to be sexually assaulted every two minutes. One in six women will experience sexual assault in their lifetime. One in 10 men will experience the same. Those most likely to be assaulted are the young, the powerless, the imprisoned and the disenfranchised, according to the Rape, Abuse, & Incest National Network.

I can’t write this article in complete transparency without highlighting how the church has historically harbored hundreds of sexual predators who, in the guise of Christian caring, have used their access to people in order to violate them physically, mentally and spiritually.

Within five years of my ordination, no less than three of my colleagues within 10 miles of my first call were forced to leave the ELCA for sexual indiscretion. One of my seminary classmates is currently serving a life sentence for abusing boys in his first call. My former internship supervisor was forced to leave the ELCA for having an affair with a subsequent intern. My CPE (Clinical Pastoral Education) supervisor was fired for sexual harassment in the workplace.

My story is not unique. The broken-ness is all around us. Sadly for the church, only the threat of litigation has forced us to move from silent complicity to zero tolerance. Shame on us for moving so slowly for the worst possible reason. I only pray that those who are victims by virtue of our apathy find healing and hope in Christ despite the church’s failings.

The collective outrage over the six-month sentence that Turner received is creating, in effect, a far worse sentence for this young man. While I cannot excuse his abhorrent action, I hope he finds peace in this lifetime, because he is not the only guilty party. Our society needs to be indicted for its tacit endorsement of rape culture. In the midst of our umbrage, it is imperative for us to ask how and when we contribute to a culture that encourages the Brock Turners to commit these heinous acts. How and when we behave in front of others regarding sexuality determines whether the world produces another Brock Turner.

And for this, we owe victims more than a mere apology. We owe them love and support as they struggle with a virulent form of PTSD that is a permanent part of their landscape. We owe them congregations where anyone with access to women and children submits to both FBI and state background checks. We owe them a safe haven where they can feel free to express their hurt and outrage in healthy and cathartic ways in the presence of trained professionals who can accompany them in their healing narrative. We owe them a future where their sons and daughters can grow up in safety as cherished members of the body of Christ.

I am grateful for the courageous words of this nameless victim of the Stanford rapist. What she did in publicly re-claiming her agency not only empowered her but also hundreds of thousands of the voiceless victims who have gone before her.