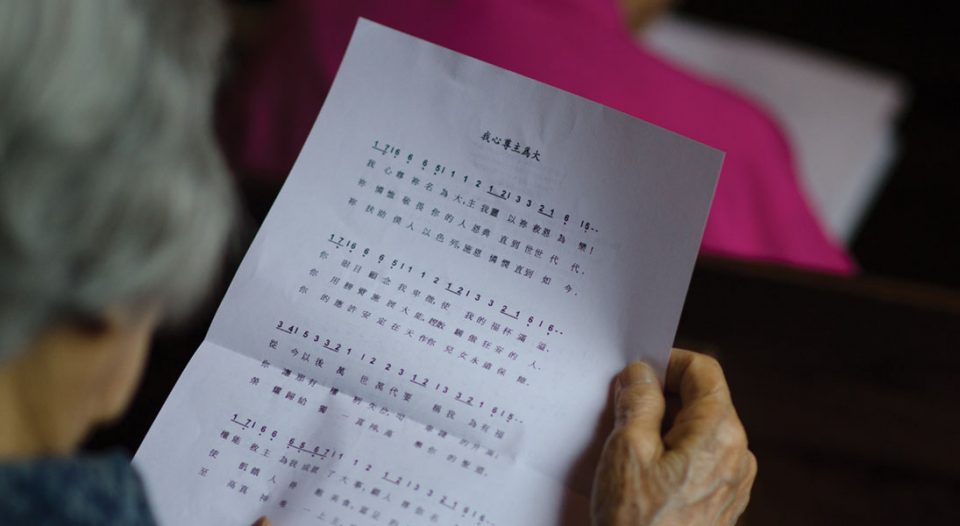 Chinese elder Li-Ping Lo holds sheet music and sings “My Soul Proclaims the Greatness of the Lord,” which was translated into Chinese by Wendy Cheung, a pastor of Grace Chinese Lutheran Church, Seattle.

Pentecost is an annual wake-up call that reminds us that the language of faith is always evolving. Open to the Spirit, we are always proclaiming Christ’s word in new ways. For ministries rooted in a specific ethnic group, that wake-up call comes when the second generation starts school. Elders speak Danish, Slovak, Hmong. Youth speak English. How shall we proclaim?

Of 200,000 ethnic Lao in the United States, some 10,000 live in Minnesota—“a big field” and a big challenge for Thiem Baccam, pastor, and members of Lao Evangelical Lutheran Church in Robbinsdale, Minn.

“Laotians value the extended family,” he said. “We like to stick together.” But when it comes to language, younger Laotian Americans who grew up in the Twin Cities are shy about speaking Lao. “They only want to speak the language in which they are confident,” Baccam said.

When Lao Evangelical started an English-language youth service, the extended family of elders and youth suffered. “We didn’t have much connection, and the relationship became very dry,” he said.

To avoid creating two camps, Grace Chinese Lutheran in Seattle makes a priority of nurturing connections between first-generation members from Hong Kong, Taiwan, China and Singapore and their English-speaking children.

“We honor the second generation,” said Jian Hua (Jimmy) Hao, pastor of Grace Chinese, whose son understands Mandarin but doesn’t speak it much. “They are living between cultures, and it is hard for them to find their place in the world, who they are in the community.”

At Grace Chinese, worshipers are invited to sing in either language. Hao delivers his sermon in Chinese, but it is simultaneously translated through headsets for those who prefer English. The Apostle’s Creed and the Lord’s Prayer are “a Pentecostal moment, when everybody participates in their own language,” he said.

Hao believes that making space for all is God’s way. “We don’t try to change people,” he said. “We try to create more opportunities for people to know and love each other.”

Of the 45 million U.S. Spanish speakers—more than Spain, but fewer than Mexico and Colombia—more than half are bilingual. Alfredo Feregrino, whose first language is Spanish, writes his sermons for Our Lady of Guadalupe, an Episcopal mission in Seattle, in English first “because I studied all my theology in English and it is easier for me to translate it afterward.”

The ministry targets young urban professionals and couples who are “bilingual and bicultural. They speak Spanish but their first language is English. They eat hamburgers and tacos,” he said.

During worship, the liturgy and lessons alternate between English and Spanish. So do the songs. “We used to alternate verses, but that was too complicated,” Feregrino said, who also delivers his sermon in the two languages.

One reason parishioners like the format is that it reinforces their fluency in both languages. “People pay attention. They think, ‘I know how to use this word.’ In a way it’s a kind of teaching,” he said.

Focused on young adults, Our Lady of Guadalupe doesn’t have a Sunday school yet. In South Texas, Irma Bañales serves a congregation with a growing program for families and children.

First Sagrada Familia (Sacred Family), a new ELCA congregation in Garland, Texas, was created from an old Anglo church and a Latino mission. Bañales now serves longtime members of the former First who speak English and new Latino members who prefer to worship in Spanish.

Experimenting with dual-language services, Bañales found that preaching the same message to two cultures—one almost entirely retired and the other in the middle of child-rearing—made her sermons “too general” to benefit anyone.

Bañales said she is working to build up “a daily congregational life that lifts up one another to continue growing and multiplying each other in our spiritual life and our numbers and, of course, with our generosity. It’s a lot of work, but it can be done.”

In North Carolina there are more than 15,000 enrolled members of the Eastern Band of Cherokee Indians, yet fewer than 200 are fluent in the Cherokee language. Young people who participate in the Kituwah Preservation & Education Program are leading the effort to revive the language of their parents and grandparents.

At Church of the Living Waters, Franklin, N.C., 90 percent of members are Cherokee. “One 13-year-old girl will pray in Cherokee during our Wednesday night meal and service,” said Jack Russell, pastor. “The two older men who are fluent speakers lift their prayers during the Sunday service.”

Before the liturgy begins, Russell leads a traditional cleansing ritual and a Cherokee morning song, accompanied by a hand drum. A traditional Cherokee prayer follows in English “because most of our congregation is not fluent in Cherokee.”

For the Gospel acclamation, the church uses the “Hallelujah” chant in Muskogee Creek found in With One Voice (609), a language spoken by a handful of Living Waters members. During the offertory, everyone sings the first verse of “Amazing Grace” in Cherokee.

Russell wants worshipers to know it’s OK to use the Cherokee language in church. “You have to be respectful of language that was almost lost,” he said.

“Pentecost for me is the highlight of the festivals,” Russell said. “In my humble mind and my thinking, it means that my ancestors were probably there listening to the preaching in their own language.”