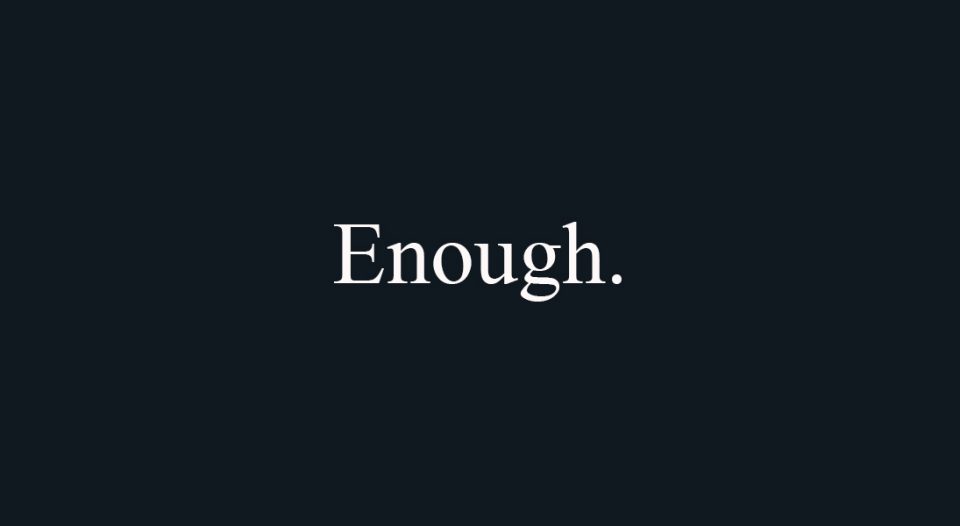 Enough. This was a friend’s profile pic—one of the first things I saw on this awful Friday morning as I sipped my coffee and woke up to the third straight day of gun violence in this nation. Enough. It sums up the frustrations and helplessness that so many of us are feeling right now as we struggle to digest this information and maintain hope that God is present in the suffering and the Holy Spirit is moving in our midst to foment understanding, forgiveness and reconciliation.

Enough. No more bloodshed, no more blaming, no more victims. We need to move from placing blame on people to understanding that this thing that is killing us is not human in origin. It is as old as Cain and Abel, and it is radically bent on destroying the fabric of human interdependence and relationship. We need more than definitions and perspectives. We need an exorcism. This thing that is killing us has its roots deep in the troubled history of our American culture. It is wrapped around so many of the civil myths we have created in this nation to assure ourselves that we are not a culture of violence, fear and exploitation; in fact, we are.

Enough. We need to name the demon now, because this is what you do in an exorcism—this is what is needed before it can be driven out.

We live in a culture that has long exploited people of color for the sake of economic gain. Prior to the Civil War, we built the world’s economy on the backs of black slaves used to cultivate lands we took from the hands of red indigenous people whose ancestors lived here for several millennia. We used guns to take the land, and guns to keep the slaves in the fields. People such as Sojourner Truth, Frederick Douglass and John Brown said, “Enough.”

We fought a war in which more than 600,000 Americans died to rid ourselves of slavery, but through a system of black codes, Jim Crow and systemic marginalization, we maintained an economic system built on exploitation. People like W.E.B. DuBois, James Cone, Martin Luther King Jr. and Rosa Parks said, “Enough.”

A groundswell of support for equality brought about change in the laws, though the shift in our thinking and culture is still far from completion. Today we live in a culture where a white minority still benefits from various forms of exploitation. The gamut runs from real estate redlining to educational disparities to hyper-incarceration of people of color for non-violent felonies stemming from the so-called war on drugs. If you are black, you are 10 times more likely to serve time for  possession of marijuana than your white counterpart. And make no mistake; the statistics show that white folks smoke weed as much if not more than black folks, though the history of marijuana use is biased against the African American community. Enough.

This demon of systemic racism feeds on our fears and incites us to violence. Those who protect and serve find themselves listening to the lie that black people are always violent people and that shooting first and asking questions later is the best option. It would be easy here to label cops as biased and racist, but the truth is much more complex. The demon of systemic racism victimizes them as well. Enough.

Police lives matter. This is difficult for many to hear because of our pain and powerlessness. First and foremost, those who serve are our brothers and sisters in Christ. There are no good cops or bad cops. There are those who make horrible decisions based on fear stemming from racist influences, and everyone suffers. Police lives matter because police officers must hold each other accountable to protect and serve all with the same fervor and respect. Killing police officers only feeds the demon that plagues us and makes matters worse.

Black lives matter. I’m sorry if you have trouble with this, but the fact that it needs to be said at all makes it so. Black lives matter more at this point in our history because these are the people whose very lives are on the line from day to day in a culture where the demon of systemic racism is doing its very worst to galvanize and separate us using whatever distinguishing characteristics it can find.

Until white folks rise up and stand in the streets to show solidarity with people of color—until we look on the faces of our black brothers and sisters and see Christ’s suffering, we are doing the demon’s bidding. Enough.

I’ve called my elected officials. I’ve had conversations with my black friends. I’ve signed petitions. I’ve prayed. I encourage you to do the same if you haven’t already (if you’ve read this far, you probably have). We need divine intervention now. This demonic possession of our culture is centuries old. Only Christ can drive it out.

We in the ELCA are fond of the slogan, “God’s work. Our hands.” Are you willing to put those hands doing the work of God’s exorcism? Are you willing to use those hands to call out racist behavior where you see it, to record and publish video so that perpetrators of violence will be brought to justice? To march? To sing? To demand an end to this demon’s reign? Enough.

It is time. To the demon of systemic racism—go to hell. Let us in fact do God’s work with our hands—hands of every color, hands reaching out in compassion, hands raised in hope.