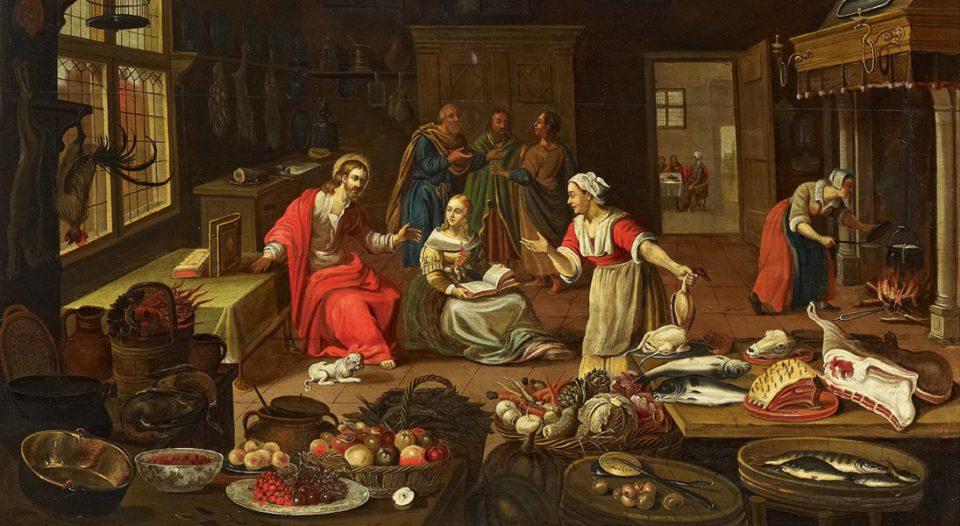 Georg Friedrich Stettner: Christ at the home of Martha and Mary

Whenever I hear this story, especially the part about Martha loudly complaining to Jesus that Mary is not helping her, I think of hot summer nights on the farm years ago. Mama and Daddy both worked two jobs; they got up early and milked the cow, fed the stock (and the children) and then rode together to the textile mill, arriving in time to clock in for an eight-hour day ending at 3 p.m. Then they rode home and joined the children in the fields and barns, taking care of the crops until almost dark—in the summer that could be as late as 9 or 10 p.m. After we ate dinner—Daddy and the five children would abandon a table full of dishes and pile into the den to watch television.

It didn’t take long until we could feel more than see an angry presence lurking in the door between the kitchen and the den. There stood Mama, hands on hips, towel clinched threateningly in her hand as she glared at Daddy. Finally, she would say, almost spitting it out, “Lowell, I could use some help in here.” And without skipping a beat, he would take a drag on his cigarette, expel some smoke, and point at a child and say, “Go help your mother in the kitchen.”

“But Martha was distracted by her many tasks; so she came to him and asked, ‘Lord, do you not care that my sister has left me to do all the work by myself?’” (Luke 10:40). Martha wanted Jesus to do what my Daddy did, point at Mary and say, “Go help your sister in the kitchen.” But he didn’t. Instead, he told Martha to calm down a bit, “Martha, Martha, you are worried and distracted by many things”—then he praised Mary, saying that she has taken the “better part.”

This story holds a certain charm for almost everyone—parents with children, adults who used to be children, children who are still children. We can all think of times when our children were fussing and pointing fingers or when we felt put upon and taken for granted. Or perhaps others had accused us of slacking off and not being helpful. In many ways it is a universal story. And it lends itself to thinking about the constant tensions in religious life between orthopraxy (right practice) and orthodoxy (right praise), between activity and contemplation, between being busy and being still, between doing and being.

So we can end up with a sermon outline or Sunday school lesson that goes something like this: (Lest anyone think I’m casting stones—I’m sure pretty sure I’ve preached more than one that came out this way.)

A nice, little, three-point outline—but not the point of this little story. The meaning for us turns on figuring out what “the one thing needed” is. What is the “better part” that Mary has chosen? What is Luke trying to say by relating this relatively minor incident in the life of two sisters?

For Luke, this is not a story about doing versus being. It is a story about receiving the Word of God into one’s life. As the scene opens, Martha has made a good start at receiving the living Word of God, Jesus the Christ. As he enters the village, she has invited him into her home. And, following his own words of instruction to the 70 when he sent them out to go ahead of him into the villages—he accepted the first invitation of shelter he received and was ready to eat whatever was put before him.

But then Martha turned from being welcoming and hospitable to being worried and concerned about making a good impression. When Jesus said, “Martha, Martha, you are worried and distracted by many things,” he was not talking about her life in general—he was talking about that exact moment in particular.

She was so busy worrying about which dish to serve first, and what must the neighbors be thinking, and how long has that chicken been on the griddle, and when should I put the bread in the oven, and do we have enough wine, and if we get out the card table and put it in the den the youngest disciples can sit there—she was so busy thinking about those things she had no time to remember her guest—the reason she was having this dinner in the first place.

She had invited the Christ into her home and into her life—and then she had no time for him. It wasn’t that her life was too busy and worrisome and distracted. It wasn’t that she had no time for leisure, for re-creation, for leisure, for rest, for thinking deep thoughts and feeling warm feelings. All those things are important, but that’s not what Luke was after here. He was after the problem of having Christ in your house without having Christ in your heart. He was after the problem of making your faith about what you can do for God rather than about what God has done for you and wants to do with you and through you for others and for the world. “The one thing needed,” “the better part” that Mary had chosen, is the part of allowing the Word of God, in all its form—whether written, living, read or preached – to speak to and change our lives.

Professor Dennis Okholm says it this way, “To paraphrase Karl Barth, ‘The church is because Christ is.’ And to use the language of Barth’s Römerbrief, the church is ‘the great crater left by the impact of God’s revealing Word’—the Word whose chief function is to confront us with Jesus Christ.” (Theology Matters, Jan/Feb. 2009.)

Mary chose to sit and listen to the Word of God. She chose the better part—but not the only part. We too are invited to come and sit at the feet of Jesus, to listen to the Word of God, to pay attention to the activity of God in world, and to be changed by that Word. But, we are also sent out by that Word, sent out into the world to get busy with the Godly worry and holy busyness of unconditional love, bottomless generosity and unending compassion. We are sent out to show the world the life-changing grace and heart-melting love that God in Christ has shown to us.