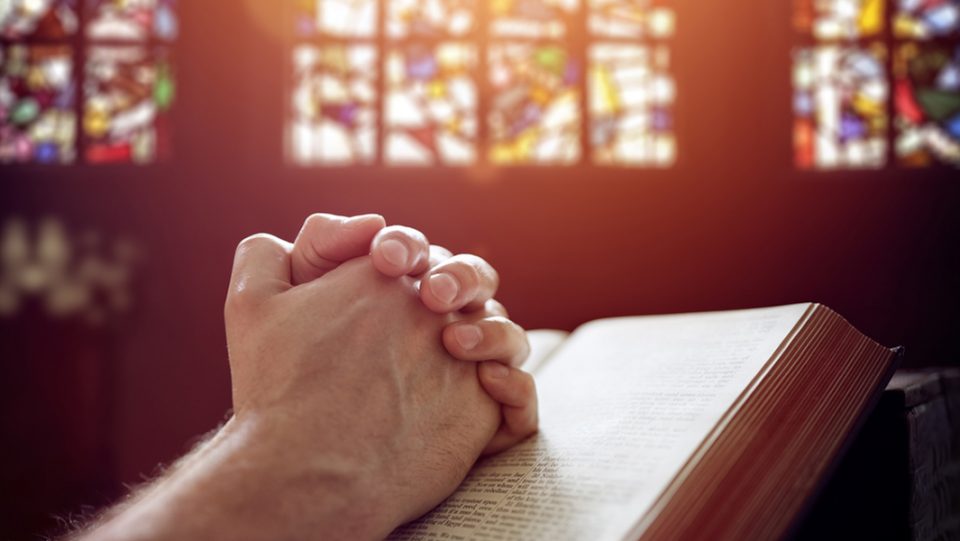 The summer my younger son turned 14 he played on an AAU basketball team sponsored by the local Roman Catholic high school. Besides the usual enjoyment of getting to see him play against good competition, the summer also provided a couple moments that amused me, if not him.

The first was the confused look on the Catholic boys’ faces when I, wearing my standard work clothes of black shirt and minister’s collar, showed up to pick up my son after practice. It was not hard to read their minds, “But, but—a priest can’t be married! A priest can’t have children!” I left it up to their coach to explain things.

The other amusing thing was the team’s practice of praying the Our Father, what we Protestants usually call the Lord’s Prayer, right before tip-off. Any of you with any experience with Catholic worship know that they end the prayer at “deliver us from evil.” They do not include the line “For thine is the kingdom, and the power and the glory, forever.”

Before the tip-off of their first game, the team gathered to pray, and when all the other boys stopped you could hear my son’s lone voice continuing, “For thine is the kingdom, and the power and the glory forever.” He looked around, then he looked up in the stands at me with a quizzical look on his face.

On the ride home he asked me about it. I told him that the Roman Catholics were being more faithful to the text than Protestants—that they only said what was in the Gospel of Matthew. The Doxology (the kingdom and the power and the glory line) has been used in the Eastern Christianity, in Orthodoxy, since the second or third century, and it came into English Protestant worship through Thomas Cranmer and the first Book of Common Prayer.

So, at the next game, they prayed again. At the end of the prayer, my son continued praying, and then tapered off, an embarrassed look on his face. Later that week I walked by the door to his room and heard him practicing the Our Father, ending carefully at “deliver us from evil.” At the third game, the team prayed, the team stopped at “deliver us from evil;” my son continued, “For thine is the kingdom, and the … OH, SHOOT!”

I have reflected on that moment frequently over the years. It has led me to think about two things. One is the power of liturgy, the strength of a prayer learned and ingrained, good and appropriate words that stay with us—sometimes even when we try to forget them or put them in our past. The second is the importance of persistence, especially when disappointed in prayer—the need to continue praying when the only true thing coming out of the abundance of our hearts is a sense of failure and futility, an “Oh, shoot!” moment.

First—the power of learned prayer. Duke Divinity School professors Will Willimon and Stanley Hauerwas say that their book on the Lord’s Prayer, Lord, Teach Us, “presents the Christian faith not as a set of beliefs but rather as a prayer you must learn to pray” (p. 15). I grew up among people whose religious tradition did not include “written prayers,” or regular forms of worship repeated week after week, but even these most independent of free-church Baptists knew the 23rd Psalm, the Lord’s Prayer and John 3:16 by heart. Why? Because once these “prayers,” become embedded in our minds, they seep out into our hearts, our souls and our lives.

Martin Luther once observed that to be a sinner was to be bent, crooked and twisted—bent in on oneself, unable to see either God or the neighbor as serving any other purpose than serving my need, fixing my problem, saving my soul, improving my life. The sinners first thought is, “What do I get out of it? How does it help me?”

By contrast, good prayers, good liturgy, the Lord’s Prayer, turn our attention away from me and mine toward God and the neighbor. This is what I think of when we sing the hymn “Joyful, Joyful, We Adore Thee”—“hearts unfold like flowers before you, opening to the sun above.” The first thing the Lord’s Prayer does is unbend us, lift us away from our eternal and obsessive navel-gazing that we might look up to God and around at the God’s world and at God’s people who fill it.

In our text, the disciples ask Jesus to teach them to pray. It is unfortunate that English does not have an official second-person plural pronoun, so I’ll have to translate Jesus’ reply into “Southern” English, “He said to them, ‘When y’all pray …’” If you’re from New York, it’s “When youse guys pray ….” If you’re from Pittsburgh, it’s “When you’ns pray ….” I am, unfortunately, not well versed about informal second-person plurals in the rest of the country, so y’all fill in the blank. The point is—this is not a personal prayer, it is a communal prayer, a community prayer, a prayer we pray together, a prayer that leads us to consider things we do with and for each other in our relationship with God.

We pray, “Your kingdom come.” Then we live as though that kingdom were already here. As Luther said in the Small Catechism, “In fact, God’s kingdom comes on its own without our prayer, but we ask in this prayer that it may also come in us.” As Willimon and Hauerwas said, we become Christian, we inhabit the kingdom of God, by praying this prayer and allowing it to shape our lives—trusting God to provide for us daily, imitating God’s forgiveness of us by forgiving others, believing God will be with us no matter what troubles we face. We take this prayer deep inside us, and it comes out in the way we live our lives each day.

Now on the other matter of being persistent, it’s really being insistent, being constant in prayer and unwilling to give up in the face of failure and misfortune, just as my son was unwilling to give up trying to pray the prayer the way his teammates did. Jesus uses two scenarios common to village life to make his point: borrowing from a neighbor and our goodness to our children. Jesus is not saying that God is either a grumpy neighbor or an evil parent. He is using the ancient technique of arguing from the lesser to the greater—if a grumpy neighbor will respond to your pleas—think how much more so God will respond. If parents will do good things for their children, think about how much more so God will do good for us.

Lectionary blog: God is much bigger