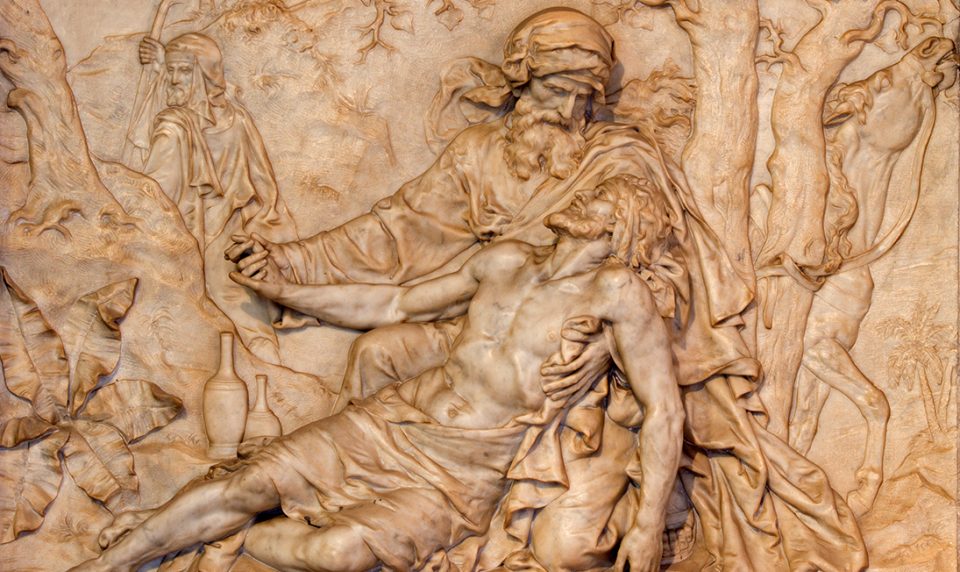 Possibly Jesus’ most well-known parable next to the so-called prodigal son was sermon material in many pulpits this past Sunday. It’s often called “the good Samaritan,” though I’m not fond of that title. Dualisms like good/bad aren’t often helpful in the end, especially not after a week—no, a year— like we’ve had. It’s a scandalous parable, playing with our notions of sensibility and self.

There’s no need to rehash it for you (though if you want a refresher, read Luke 10:25-37). Suffice it to say that the lawyer intended to test Jesus and wanted clarification on just who he was required, and therefore not required, to take seriously in his quest for self-justification. He wondered who mattered to Jesus, as Jesus was the expert on who mattered.

And so Jesus told him a story in which it is made clear who matters to Jesus: the abused and the one who risks their very self-identity to show love to the abused.

No—not just risks, but sacrifices, even to the point of much personal loss.

The systems of racism and death that run deep in our American psyche have left many battered, bruised and dead in the street. The outrage is real. The systems of revenge that sprout when anger turns from indignation to evil has resulted in more death. The horror is real.

And we pass on by with sadness, looking for investigations to run their courses and trying to catch people in their hypocrisy. We busily get ourselves about the business of self-justification as we walk toward self-righteousness, testing the limits of patience and friendship, posting meme after meme and article after article along the way.

Eventually we just walk to the other side of the internet super-highway because we can’t bear to look at the other anymore.

The funny thing about this parable is that I think the lawyer is in the story, but maybe not in the role he thinks he is. I wonder if the lawyer in the story is the one bruised in the street and he just doesn’t know it. Beaten up by a worldview that robs him of any sense of real justice, that steals away his ability to perceive his neighbor naturally (must we really be told?!), that hijacks the gifts he could share if only he wasn’t tied to the self-righteousness and narratives of power and fragility that shackle his heart and soul, he’s all but a ghost of himself even as he utters the question to Jesus.

Questions that seek self-justification always steal your soul because they are your best attempts to save yourself, which in the end cost you everything without a lick of redemption to show for it.

He doesn’t know it, but I think he’s in the ditch here.

And along comes this one from that nowhere place of Nazareth, as if anything good could come from there and “those people” (John 1:46). The outsider who hangs with the wrong crowd, who is habitually unclean and makes a practice out of saying the things that send people into a rage. This unlikely one lifts him up from the pit.

And he takes him to this house with many rooms and gives of his own self to protect him. He gives of his own treasure for his well-being so that he might know the peace that comes with having your wholeness given back to you, the peace that comes from not having to assert that you matter because it’s plainly seen by the way people treat you, which is all anyone really wants anyway—for it to just be self-evident.

Maybe the parable of the good Samaritan is the one where Jesus is the Samaritan, our Samaritan. It’s the story of the unlikely God we can’t see in the other, yet who shows us mercy and gives us wholeness despite our misgivings about them.

Maybe instead of calling it, “the good Samaritan,” we should call it “the Samaritan God.” Or is that too scandalous?