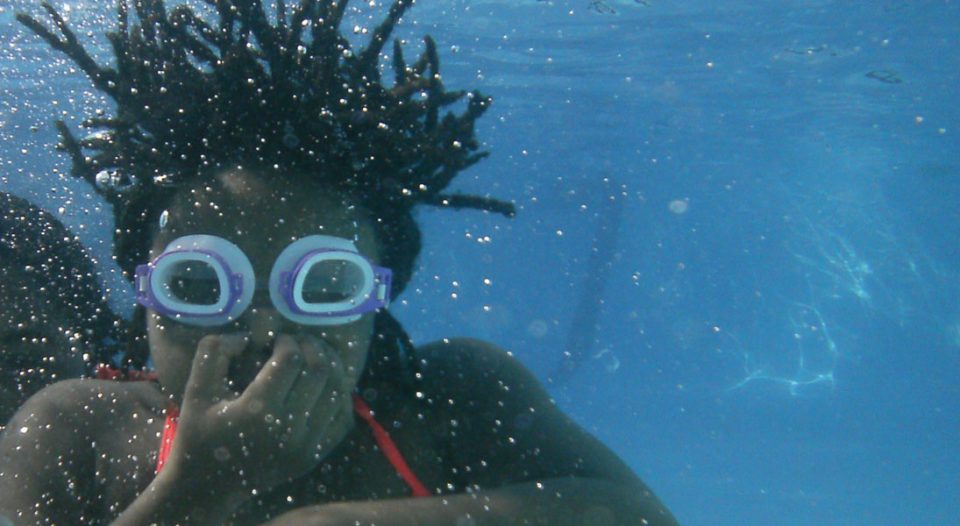 A young camper dives underwater. Along with swimming, Youth Haven campers play games, sleep in cabins, do arts and crafts, and go on adventures in the woods.

In places of Washington, D.C., where tourists rarely visit, a quiet epidemic is raging. At least 3 percent of residents—more than 20,000 people—suffer from HIV and AIDS. According to The Washington Post, the HIV incidence rate in D.C. is on par with Uganda and Kenya.

When the impact of HIV and AIDS was starting to show in 1999, Lutheran Social Services of the National Capital Area (LSS-NCA) decided to do something about it. “The disease here is somewhat different from the stereotypes of the general national media in terms of who was acquiring the infection,” said Kati Miller-Holland, LSS-NCA director of church and community ministries. “We were very concerned about children and families.”

Miller-Holland, whose background is in youth and education ministry, was recruited by the social service agency to build up a new program to serve the growing crisis.

Youth Haven started out as a once a year camp for kids who were “HIV positive and either quite ill or really struggling with the medication regime,” Miller-Holland said. “They were dealing with a lot of fear and rejection of people with HIV. We were trying to be a safe, confidential, positive, spirited place for kids to be kids.”

Today Youth Haven features not only weeklong camps but also teen retreats, family camps, mentoring, and regular field trips and events for youth and families affected by HIV and AIDS.

‘Life is about having dreams’

For teens like Samaria (last names of participants are withheld), a 19-year-old who contracted HIV from her mother at birth, Youth Haven is the only place where they can flourish and not keep their biggest secret.

“We are constantly facing a life or death situation, but there is more to life than taking pills every day,” Samaria said. “After you take your pills, what are you doing with your life? [Life is] not about suffering and feeling sorry for yourself. It’s about having dreams and following them.”

The impact of donated items like decorated medication boxes for the kids and beach towels for swimming impressed Claire Smith, a nursing student who volunteered at a Youth Haven camp last summer.

“There were so many different groups of supporters—that’s a beautiful aspect of the church. It wasn’t just LSS-NCA, it was churches volunteering their time and services for people who were different from them,” Smith said. “It demonstrates what Jesus taught us, opening your hearts and arms to everyone without judgment.”

About 10 years ago, Youth Haven staff saw that the camps weren’t enough. The kids went home to families struggling with poverty, violence and drug abuse—stressors that didn’t allow them to focus on their own wellness. So LSS-NCA began to expand program services.

“We’re more than just occasional camps. HIV is with them every single day and our relationship is too,” Walker said. “In the overnight camp setting we can have conversations that just don’t happen in other places. In our follow-up activities we expose kids to things that can give them a new way to see their future.”

At that event, Sandra and her children Devante and Tierra drew a family crest featuring Egyptian pyramids surrounded by rainbows and light. The pyramids represented the influence of African people, and the rainbows the power of hope. “I did this in reference to soul survivors,” Sandra said. “I am a soul survivor. My family are soul survivors because we have been through so much.”

When the Youth Haven staff surprised Sandra with her Budsie pillow based on her family’s crest, she stood up from her seat with disbelief. “This is so nice,” she said, as she fanned tears away from her eyes and turned the pillow to show the room full of other families.

Youth Haven has served more than 500 people since it was founded in 1999. While the HIV and AIDS incidence rate in D.C. has decreased from its peak in 2009, Miller-Holland doesn’t anticipate less of a need for services in the future.

“We’re really heartened that babies aren’t being born with HIV these days in the District of Columbia. But we are seeing a rise in HIV infections from teens and young people in their 20s, and it’s very disconcerting,” Miller-Holland said.

Youth Haven works on two areas of focus. “First, providing services for folks in need of them, and also providing opportunities and resources for folks in the general community who still continue to be misinformed about HIV/AIDS,” Miller-Holland said. “The community education piece is still huge.”

Beyond the disease itself is the stigma attached to it, which Miller-Holland thinks is where the average Christian can make the biggest impact.

“The day that there is a cure for HIV will certainly be worth celebrating, but it will not mean that the AIDS stigma has been cured,” she said. “That is the responsibility of all of us, particularly faith communities. We need to change attitudes that truly harm young people and their families.”