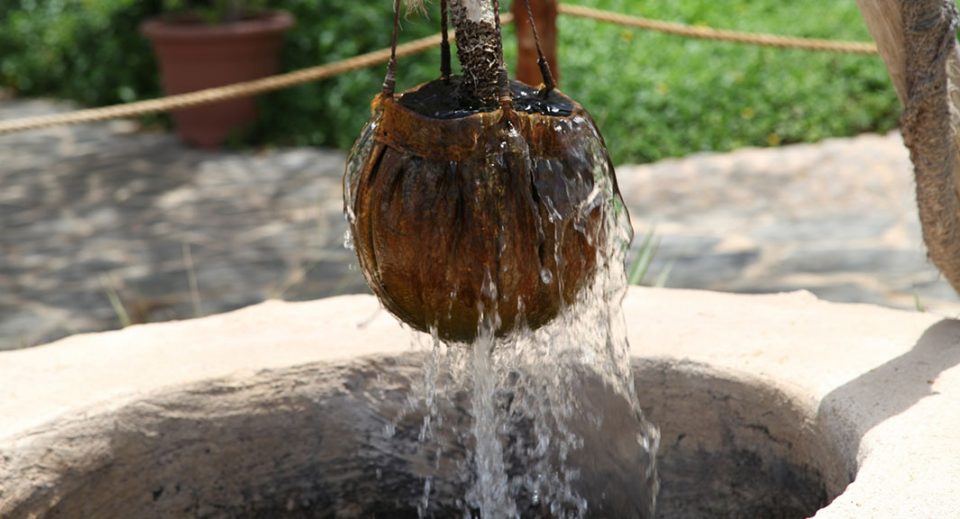 A young boy lived in the country near a well that his grandfather had dug. The boy was fascinated by seeing his grandmother lower her bucket and bring up water from the earth. Every time she lowered that bucket, it came up full. There was never a time they were without water.

One day the boy asked his grandmother to fill up his kiddie pool with water from the well. His grandmother was tired so she declined. His grandfather did the same. Frustrated, the boy decided to pick up a shovel and dig his own well.

After he had made a sizable hole, it began to rain so he went inside the house. The next day he went outside to play. He was happy to see that his “well” was filled with water.

The boy was elated so he dragged his kiddie pool to the “well” and began to scoop up the water and pour it into the pool. About a quarter of the way full, he ran out of water.

Frustrated again, he ran to his grandmother and asked her why his well ran out of water and why hers was always full. She turned to him and said, “You have to tap into the source.”

Through the grace-filled waters of our baptism, we are not to alter Christ’s living water. People must drink it pure and untainted by any means possible.

This reality doesn’t occur without struggle, just as Moses named the location of the water at the base of Mount Sinai “Massah,” which means testing/trial/temptation, and “Meribah,” which means protest/contention/quarrel/strife (Exodus 17:1-7).

With their lips parched, throats dry, bodies fevered with heat, the Israelites lay on the arid soil around the ill-named resting places, maddened, furious and desperate. Moses strikes the rock, and the outcome is an abundant copious stream—aye, “rivers of living water!”

It’s time for the church to get wet. If the church is to survive, it must hydrate in the fountains of living water. For only water quenches people’s eternal thirst. We can’t subsist on a sip now and then. Our spiritual health depends on constant rehydration. The only way to increase our supply of living water is to go beyond inviting others in to drink and allow the new generation of water-bearers to host the grace-filled water supply.

It’s up to each generation to make sure the living water of God’s redeeming love, Jesus Christ, is made accessible for the next generation to come. When our thirst is quenched, the church can withstand all things. Our cisterns will always be full. Then we’ll know we are blessed—even in anxious times—and that Jesus is the source of living waters like grandmother’s well, which never runs dry.

With the realities of technocracy, we know that living water doesn’t have a long shelf life. In fact, a new shipment must be received for every new generation
of Christians:

William Flippin Jr.
Flippin is pastor of Emmanuel Lutheran Church in Atlanta. He serves on the ELCA Church Council and as third vice president for the Georgia NAACP.