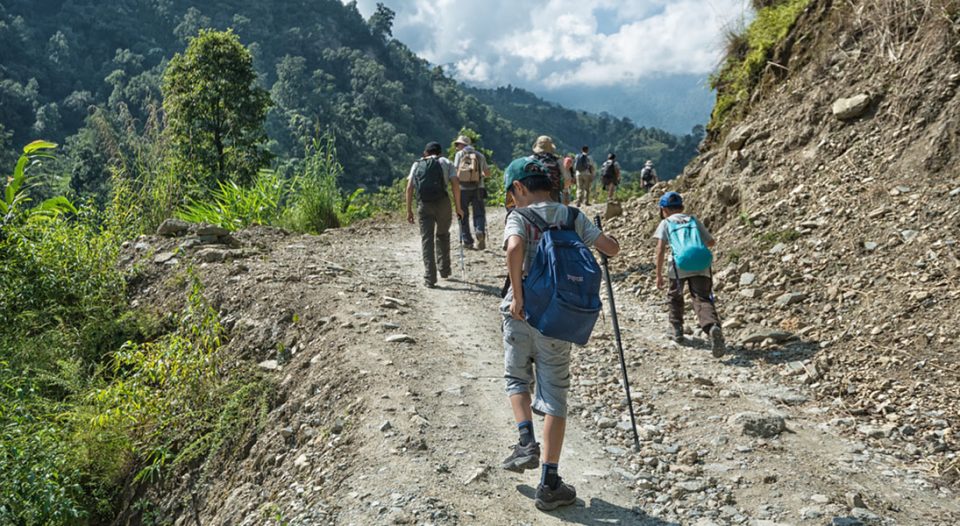 I grew up attending a congregation somewhat loosely affiliated with the Southern Baptist Convention. The youth ministry of most Baptist congregations in those days was divided into two groups; Royal Ambassadors (RAs) for boys and the Girls Auxiliary (GA) for, well, girls. (They later changed that to Girls in Action.)

Anyway, somebody had the bright idea that all the RA groups in the local association should go camping together at a campground along the Blue Ridge Parkway. It was really a pretty good outing—not particularly religious but a lot of fun. We slept in a motley collection of tents, ate food we burned ourselves over open fires, and played baseball and volleyball with groups from other congregations. Saturday afternoon one of the pastors decided we should all hike to the top of a nearby mountain. Pastor “Bob” was an ex-military chaplain and was very gung-ho about what he called “manly Christianity.” The rest of the pastors, well, not so much. They persuaded him it should be a voluntary activity, only for those who really wanted to go—like him and not them.

So he called all the kids together; there were probably about a hundred of us. He said, “Who wants to go climb the mountain?” And we all cried out, “We do! We do!”—while waving our hands in the air. Pastor Bob smiled a really big smile and then looked at his ministerial colleagues and then back at us and said, “OK, just so you know, it’ll be about a 5-mile hike.” About half the hands came down. “Both ways—so that’s 10 miles.” Another half of the hands came down. “It’s really steep.” More hands came down. “We’ll need to carry backpacks with food and emergency equipment.”

At this point only the somewhat intimidated kids from Pastor Bob’s congregation still had their hands in the air. Suddenly Pastor Bob’s young associate pastor stepped forward and shouted out, “Who wants s’mores?” And everybody cheered and followed him to the nearest campfire, leaving a crestfallen Pastor Bob to trudge into the wilderness alone.

“Now large crowds were traveling with him, and he turned and said to them, ‘Whoever comes to me and does not’”—turn their back on their family, does not take up a cross, does not follow me in a life of witness, service and suffering for others, does not drop everything and go with me up Mount Calvary—well, you cannot be my disciple. Man, that’s harsh.

Every time I read this lesson, especially the parts about hating your family and selling ALL your possessions, I think to myself, did he really mean that? Was Jesus serious about that? I mean, does this belong in the category of hyperbole and exaggeration to make a point, like that other stuff he said about “cutting off your hand” and “gouging out your eye”? If you’re of a literalist frame of mind, well this is some hard, hard stuff. I think I’d rather go eat some s’mores and play some baseball and leave the spiritual mountain-climbing to someone else.

But Jesus did mean it. He didn’t mean it literally, but he meant it. The Greek word used is a comparative word. We use the word “hate” in the same way occasionally. “Honey, I’ve getting ready to cook dinner. Would you rather have steamed broccoli or cooked cabbage?” “Oh, no contest! I hate cooked cabbage. Let’s have the steamed broccoli.”

Jesus is really saying, “If it comes to a choice between me and your father and mother, or your wife and children, or between brothers and sisters, or even your own life, unless you can choose me, you are not my disciple.”

Those are indeed hard words, but they are not about hating those whom you are called to love. They are about counting the cost of loving and following Jesus. Like building a house or going to war, there is a price to be paid, and the one who does not count the cost lives to regret it.

This is what Dietrich Bonhoeffer was getting at in his most well-known book, “The Cost of Discipleship.” In it he identifies what one of my professors called “The Protestant Problem”— cheap grace. We preach God’s forgiveness of our sins so strongly that, if we’re not careful, we will begin to believe that it doesn’t matter what we do God will forgive us, so why worry about doing the right thing? As one skeptic put it, “God likes to forgive. I like to sin. It’s a nice arrangement.”

To this Bonhoeffer offered a resounding “No!”—both with his words and with his life. Echoing Jesus in today’s Gospel, he called people to count the cost, to realize that accepting God’s grace also meant accepting a life of service and sacrifice. Not only did Bonhoeffer say this, he lived it. Leaving behind the security and safety of a teaching job in New York City, he returned to Germany to spy and plot against Hitler, dying by a hangman’s noose before his 40th birthday, grieved by his family, friends and fiancé. He did not hate or detest these folks, but he loved Christ and Christ’s world more.

We are also invited to count the cost of following Jesus. Like Pastor Bob, Jesus stands before us telling us what it will take to go with him up the mountain. But Jesus offers something more. Christ will not only lead us. Christ will not only go with us—Christ will fill us with the Holy Spirit. Christ will provide us with the strength and the will to continue. Christ will even carry us in those places where we cannot carry ourselves. Though Jesus does indeed invite us, also in the words of Bonhoeffer, to come and die, Christ also promises to raise us to new life—in this world and the next.