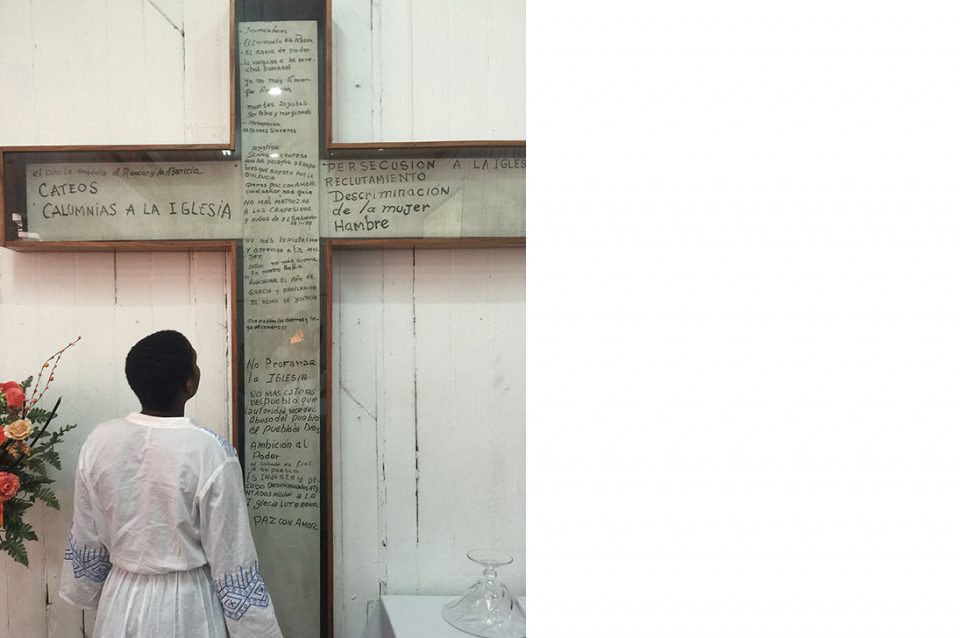 During the day, people come and go, visiting the offices of the Salvadoran Lutheran Church behind the safe house. By 10 p.m., the high, metal gate is closed, battening down the only entrance. Bars on the windows and pebbled glass obscure the world in both directions.

After years of contemplating this mission trip, this July I took the plunge. I spent a week in El Salvador with my congregation’s Equipo El Salvador project. We lived three and four to a room, all seven of us sharing a bathroom. With 25 people living in the church’s safe house, Casa Concordia, sometimes there was hot running water, sometimes we splashed ourselves with cool water from the barrel.

Pastor Santiago Rodriguez brought a scholarship student to us to tell her story. She sobbed over her mother, who cannot stop weeping over her lost home and garden, lost because a neighbor said something to the gang. Another family’s home was torched because they rejected a gang member’s interest in their daughter. Because of gang violence, the president has brought the military to the streets.

As we walked along the 300 feet of the granite Monument to Memory and Truth, we read the 30,000 names of the murdered and disappeared, knowing that 75,000 were lost to El Salvador’s civil war. The list is incomplete because not all the names of the war’s victims were available when the monument project began.

When the Salvadoran Supreme Court struck down the Amnesty Law, we thought, finally, there will be accountability for the war crimes. But our friend Helga, a former member of our New York congregation, Advent Lutheran, thinks the country’s scarce resources should be applied to more urgent matters. Why spend money putting people on trial for crimes that happened decades ago when the infrastructure needs work, teachers need training and violence exists at all levels of school?

At Casa Esperanza, the Salvadoran Lutheran Church supports housing and programs for people in need, and Trini Olmedos provides hot meals made with produce from her farm to 45-50 people Monday through Thursday. We met people who were homeless, addicted. They thanked us for visiting.

At La Resurreccion, a Lutheran congregation in a low-income, gang-ridden section of San Salvador, Bishop Medardo Goméz performed the liturgy next to the Subversive Cross. It is a rough thing, 10 feet tall, painted white and scrawled in black marker. The handwriting on it is as varied as the parishioners who in 1989 listed the sins of the authoritarian government.

After a dusty, hour-plus ride to Calderitas, Advent’s sister congregation, we sat on Don Orlando’s porch as its pastor, Christian Chavarria Ayala, performed the liturgy and members from our contingent played the keyboard. Outside the gate, a woman lingered to watch.

A few hours of picking up trash from the cornfield and helping paint the cinder-block house that our sister congregation is buying with support from our project encouraged other community members to join us. They doubled our efforts, then doubled the attendance at the congregation’s next service.

On our last day, we watched as a lawyer met with members of our sister congregation. Now that the land and cinder-block house belong to Calderitas, they can establish a permanent home.

That night we made dinner for everyone at Casa Concordia. Salvadorans and New Yorkers took turns swinging at the piñata, and we all laughed from our bellies.

I understand why the Spirit brought me to El Salvador, to build community and to see.

Karen Cantrell
Karen Cantrell is a writer and life-long Lutheran whose stories and articles have appeared in various publications.