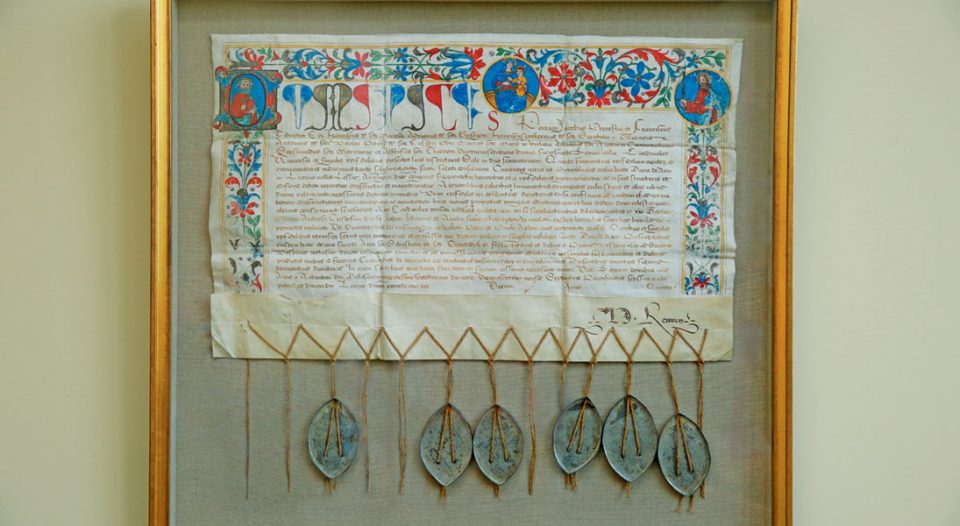 From ELCA Archives. Papal indulgence, 1516. Presented to Lutheran Church Productions, producers of the Martin Luther film by German Lutherfilm, GmBH and the German National Committee of the Lutheran Word Federation in 1954.

Series editor’s note: This month, on the cusp of the 500th anniversary, we begin a yearlong series on themes related to the Reformation. In this column, Professor Vítor Westhelle offers a marvelous response to the news reporters’ “five Ws.”  —Michael Cooper-White, president of the Lutheran Theological Seminary at Gettysburg (Pa.).

Legend has it that the Augustinian friar Martin Luther, professor at the University of Wittenberg (Germany), nailed to the Castle Church door 95 theses for a dispute on the power of indulgences. The gesture was, at that time, a common practice of the academic community to engage a public debate. Only in retrospect did it assume the historical magnitude it received.

The theses were momentous in awakening dormant crises that people were living through and offered pathways out of them. The theological battle cry was justification by grace through faith, which had concrete consequences. And because of these consequences, Luther’s gesture led not only to an academic debate, as the 95 Theses had initially intended, but a reshaping, a re-formation, of the very social fabric. Although the Reformation had many other actors, Oct. 31, 1517, became a symbolic day and Luther became a figure larger than life.

The celebrated nailing of the 95 Theses marks the Reformation more for uplifting the principle of God’s free grace and its effectiveness than for the emblematic theatrical gesture. This theological principle cut into three fronts. Each addressed anthropological and sociological dimensions of a human existence in shambles and ready to burst. The nailing of the theses, with its message that God’s grace is not for sale, was the trigger. Justification by grace alone morphed from a teaching into a transformative practice that transcended the main characters of the Reformation, including Luther.

A world-changing movement on three fronts

The political front came to the fore early in the Peasant Revolt (1525), which was subsequently suppressed. The uprising was a powerful civic rebellion inspired by the incipient Reformation movement. Drafted by reformers, the “Twelve Articles,” a document that presented the peasants’ pleas, starts with the Reformation’s resolve to rely solely on the word of God, trusting in God’s grace, and then moves to make concrete demands concerning the life of the people—access to common land for hunting, fishing, collecting wood, the demands for fair taxes and rents, and for the abolition of the “death clause” (a widow losing entitlement to her husband’s land). The peasants cried for a vital space in a late feudal society.

Luther, who was first called upon by the peasants as an advocate to their cause, later supported the repression launched against them. The time had not yet come for them. But some of the peasants’ demands would find their way into the American “Declaration of Independence” (1776), the French Revolution (1789), and finally were comprehensively addressed in the 1848-49 revolution in German states.

A second front of the Reformation movement was connected with the emergence of financial capitalism and the practice of usury. Luther, Philipp Melanchthon, John Calvin and the other reformers’ opposition to the practice were on theological grounds. Usury extorted nature and labor that were free gifts of God to all. Indulgences were to the church what usury was to the economy: an idol that robbed labor and drained life. Here the reformers’ and, in particular, Luther’s voice in defense of the created goodness of the economic order built on labor is vigorously upheld against the usurer’s monetary exploitation.

These two fronts are complemented by a third one, in which the Reformation was most successful and Luther had a particularly important role to play in reshaping the most powerful institution of the time. He was foremost the reformer of the church in its earthly (!) task of being an instrument of the word of God in both its vocal (proclamation) and visible (sacraments) forms, providing a space for the pure reception of the word of grace.

The Reformation effectively confronted politics, economy and church, but not because the reformers were political scientists, economists or cardinals. They were plain and simple shepherds of God’s flock who knew the liberating power of the word of God and trusted the efficacy of the work of the Spirit active in love.

Spirituality determined the worldly impact of the Reformation. The Spirit set the reformers free to accept the liberating power of sheer grace to announce, amid trials and tribulations, that this grace cannot be bought, cannot be sold, and cannot but be embodied and commune with the stuff of this world.

The genius of Luther and other reformers was to sustain, through and through, this communion, a communication between Spirit and the flesh, the evangelical event and social realities, justification and justice, God’s presence and the care for a world that is passing.

Or as Luther said eloquently: “If our gospel is the true light, then it must truly shine in darkness … if we want to transform the world, then we must go out into the world or create another world which will do whatever we, or God wants” (Luther’s Works, Weimar edition, 51, 409, 27ff).

Vítor Westhelle
Vítor Westhelle is professor of systematic theology at the Lutheran School of Theology at Chicago. His book, Transfiguring Luther: The Planetary Promise of Luther’s Theology, will be published this fall by Cascade.