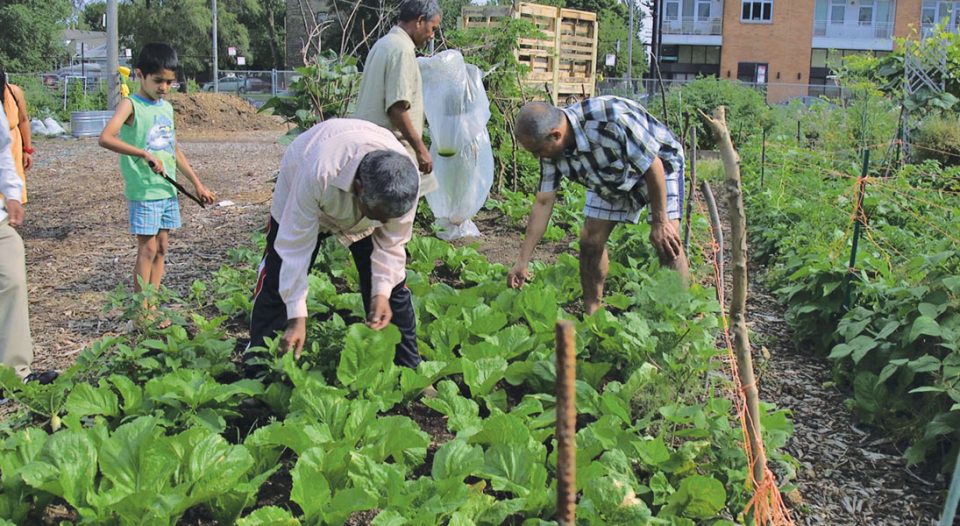 It’s summer in Chicago, and the air is thick and balmy. In the Albany Park neighborhood, rows of lush, green plants—daikon, cucumbers, zucchini, carrots—bask in the heat. Hasta Bhattarai, who has gardened there for five years, walks through his family’s plot, showing off what they’re growing.

“Americans would think of this plant as a weed, but for us, this is food,” he said, pointing to a tallish plant with light green, springy leaves that indeed looks like a weed. Earlier that day, Bhattarai’s wife Chandra served it sauteed in a traditional Bhutanese dish.

Originally from Bhutan, the Bhattarais find that their plot, and the community they’ve found at the Global Garden Refugee Training Farm, bring warm memories of home, a place they fled years ago.

Until the early 1980s, Bhattarai said, people of all ethnicities were treated with respect in Bhutan. But his people—farmers of Nepali origin—began to be seen as a threat to political order because of their different language and traditions. “[Those in power] raped the women, people were beaten. They seized the bank accounts, the crops—it all became the government’s property. They threatened us,” he said. “We had to leave the country or face death.”

Gathering up food, clothing and blankets, Bhattarai and his family abandoned their farmland and walked for days until they reached India. They then made their way to the southern part of Nepal, hitching rides on trucks transporting goods around the country. “We had a small group there. In the beginning people got organized and raised voices in the international community, and we started to get help from the United Nations,” he said. “From there we started the camp.

“In the beginning, we didn’t know anything and we were really hopeless,” he said. “But when we started getting some help from outside, that gave us some hope we could rebuild our lives.”

As time went on, a school was organized and Bhattarai started teaching. There he met his future wife, a student. “At the time, I didn’t even notice her,” he said. Later, when he was working at a school outside the camp and needed a science teacher, Chandra stepped in. They reconnected and fell in love.

A new life in a new country

In 2008, with the help of the International Organization for Migration, the Bhattarais were given the opportunity to resettle in an approved country of their choosing. In the 17 years they spent in Nepal, they had tried more than once to return to Bhutan, which remained unsafe. Ultimately, Bhattarai said they chose to move to the U.S. because it was the biggest and most powerful country they knew, and they hoped they’d have a better life there.

Meanwhile, in Chicago members of Holy Trinity Lutheran Church began making plans to welcome the family. Working with RefugeeOne, a local partner of Lutheran Immigration and Refugee Service (LIRS), the congregation collected goods to furnish the Bhattarais’ apartment and collected donations to cover their first three months of rent.

“We saw this as a ministry of welcome, welcoming the stranger,” said Craig Mueller, a pastor of Holy Trinity, which was a RefugeeOne sponsor for 12 years. “Essentially, it is a ministry of grace.”

With tickets covered by LIRS (an expense they paid back in five years), the family flew to the U.S. A few members of Holy Trinity and RefugeeOne staff greeted the Bhattarais at O’Hare International Airport and took them to their apartment to get acclimated.

RefugeeOne staff supported him and his wife through case management, employment and immigration support. As part of their sponsorship, Holy Trinity members mentored the Bhattarais while they acclimated to life in the U.S. That’s how the family came to know Rita Schnell.

A retired music teacher and active member of Holy Trinity, Schnell had an instant connection with the family. “They both spoke English and that made it easy for me,” she said. “I told them right away, if there’s anything you don’t understand just let me know.”

Schnell was there early on to help the family deal with a roach infestation in the apartment, working with RefugeeOne to advocate for their safety. When Chandra was pregnant with her son Arpan, now 7, Schnell drove her to and from doctor appointments. “I sat with Chandra when she was in labor. Her mother wasn’t here and she was scared to death,” she said.

As Arpan grew up, Schnell accompanied them to the pediatrician and sent him subscriptions to Ranger Rick and Highlights for his birthday.

Although Holy Trinity went on to support other refugee families, Schnell has kept up a special relationship with the family. “She became our friend,” Bhattarai said. “She is like family to us.”

Schnell has been touched by her relationship with her “extended family” as well. “They’re just a delightful family, and I’m happy they have found success,” she said. “A year after Arpan was born, Hasta said, ‘Oh, you are just like our mother.’ ”

Teaching again at the garden

Through their own ingenuity, and with support from Schnell and RefugeeOne, the family’s sense of security and stability has grown since they resettled in Chicago.

Bhattarai’s first job was at O’Hare, and today he works as a doorman at a hotel in downtown Chicago. Chandra is tutoring and just finished her master’s degree in math, with hopes of teaching soon. They’ve moved from two apartments to a house with a small garden in the backyard, and have two young boys.

Reflecting on his family’s time in the U.S., Bhattarai said, “It’s not easy because we have had to undergo a lot of things. Maybe our kids will do better. I’m hoping they will do better.”

Bhattarai’s love for education continues to be a passion, and although he isn’t exercising it at work, he is teaching through his leadership in the Global Garden. He doesn’t just tend his plot there, he spends time with fellow Bhutanese refugees, whom he considers family.

Fluent in English, he helps other refugees navigate the challenges of life in the U.S., whether it is the language barrier or cultural differences, using knowledge he gleaned from his relationship with Schnell and RefugeeOne.

“I love helping people. When I’m there, if they need someone to help, I will,” he said. “They say, ‘Oh, are you coming to the garden today?’ and when I get there, they come with a bunch of people. I sit there and help them.”

For the Bhattarais and many others, the garden is a special place, not only for growing food, but relationships. Passing on wisdom and sharing stories in the spirit of welcome that first embraced them, they have found authentic community there.

A grant from ELCA World Hunger made possible the work of RefugeeOne in 2008.