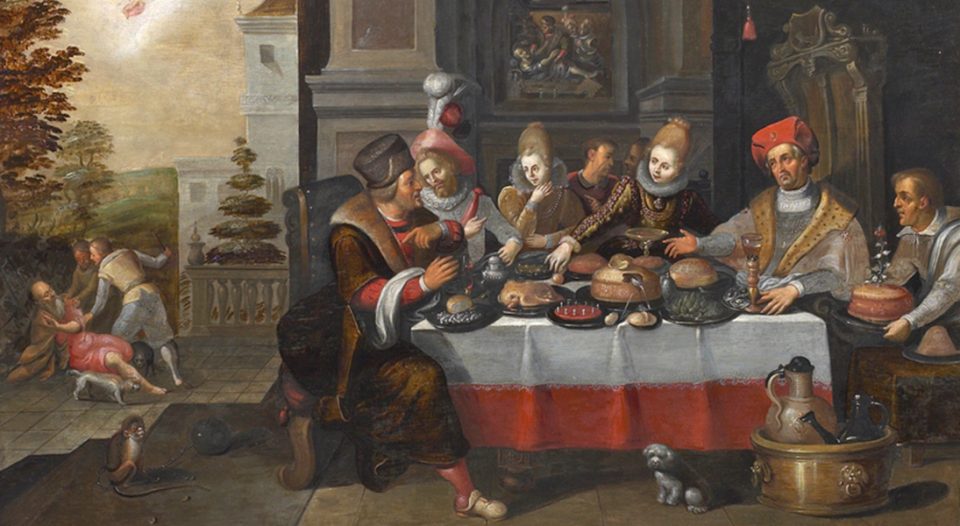 Lazarus and the Rich Miser

In the movie “The Princess Bride,” one of the running gags has to do with a scheming con man who continually says things are “inconceivable.” The problem is—everything he says is inconceivable ends up happening. Finally, his huge and supposedly dim-witted henchman looks at him and says, “I don’t think that word means what you think it means.”

To my father, the idea that his children could hear him tell them to do something and then not do it was truly “inconceivable.” He would tell one of us to do something, and if after a few minutes the child did not begin doing as requested, he would bark, “Didn’t you hear me?” For my daddy, not hearing him was the only possible explanation for our not doing as he requested. Hearing without obeying was “inconceivable,” simply not possible, something he could not understand or imagine.

Our Gospel lesson today turns on a question of hearing without obeying. In verse 29, Abraham says to the rich man “(Your five brothers) have Moses and the prophets; they should listen to them.” For Abraham in the text, and for Jesus as the storyteller, it was “inconceivable” that people could actually hear what Moses and the prophets said and yet not obey, not do what was commanded. In good Jewish tradition, to listen to the word of God is more than simple hearing; it is also doing what the word of God commands.

In this parable, Jesus creatively retells a story that was part of popular folklore of his day. It is not a story we should use to try to figure out what life after death is like—that is not the point of the story. Jesus is using this ordinary folk tale about rewards and punishments in exactly the same way a modern preacher might use a joke about someone going to heaven and talking to St. Peter at the Pearly Gates: “Did you hear the one about the woman who when St. Peter asked her for proof that she was a Lutheran she looked in her huge handbag, muttering ‘I know there’s a hot dish or a Jell-O mold in here somewhere’?”

So Jesus tells this story, and he tells it well. Short, quick lines create images that stick in your mind. A self-indulgent rich man, wearing expensive clothes and eating vast quantities of gourmet foods—all day, every day, while at the gate of his mansion, there is poor Lazarus, starving, hoping for a hand-out, licked by dogs. And then they die. Rich man is buried and descends into hell; Lazarus is carried by angels to the bosom of Abraham.

This great reversal of fortune becomes even more stark when the rich man asks Abraham to send Lazarus to him with a mere drop of water to cool his tongue, and Abraham says, “No, it can’t be done; it is too late. Nobody can cross the distance between us. You made your bed, now sleep in it.”

Resigning himself to his fate, the rich man tries to save his family. “Send Lazarus to warn my brothers, so that they will not wind up here too.” In reply Jesus drives the rhetorical dagger home—Abraham says, “You and they have both already been told. You and they have Moses and the prophets. You and they have chosen not to listen. It is inconceivable that you really listened, because you have shown no evidence of having heard in the way you have lived your life.”

When the man pleads that someone coming from the place of the dead, a spirit or a ghost, would surely convince his brothers, Jesus does not back down. He insists they have already been told all they need to know: “If they do not listen to Moses and the prophets, neither will they be convinced even if someone rises from the dead.” Jesus is adamant that the problem is not that we do not know what we are called by God to do; the problem is that we have not listened. We have not been willing to do as we have been asked. We have not taken God seriously.

There is a scene in the comic movie “My Cousin Vinny” in which Brooklyn lawyer Vinny is instructed by a very serious, small-town judge in Alabama, “Do not appear in my court without appropriate attire.” The next day Vinny shows up dressed in his usual black, leather jacket. When the judge reminds him that he was ordered to wear a suit and fines him for being in contempt of court, Vinny is astonished and says, “You were serious about that?”

The rich man has discovered that God, speaking through Moses and the prophets, was quite serious when he said things like this, which fill the Hebrew Scriptures:

Deuteronomy 15:7—“If there is among you anyone in need, a member of your own community in any of your towns … do not be hard-hearted or tight-fisted toward your needy neighbor.” That’s Moses.

Isaiah 58:7—“… share your bread with the hungry, and bring the homeless poor into your house … .” That’s a prophet.

The rich man could not say he did not know what he was called of God to do for his poor neighbor, nor could he claim not to know Lazarus or that Lazarus was starving at his gate. The rich man called Lazarus by name—he knew him; he knew his situation, and he did not care. Even in the afterlife he continued to look down on Lazarus, attempting to treat him as a servant at his beck and call. “Send Lazarus to me,” he says. “Send Lazarus to my brothers,” he adds.

Even when he has lost everything else, he has not lost the sense of place and privilege that kept him from really hearing, really listening to, really conceiving of, and really obeying the truth God was telling him in the Scriptures. He just didn’t believe God was serious about that.

Albert Schweitzer is best known as a missionary doctor in Africa. Did you know it was his third career? He was also an accomplished church musician, an organist; plus, he was a world-renowned New Testament scholar who wrote one of the foundational books for 20th century studies on the life of Jesus, and, in his spare time, a Lutheran pastor.

When he was asked why he became a doctor and moved to what was then French Equatorial Africa, he cited this parable. He noted that the rich man, for him representing Europe, had medical care, and Lazarus, representing Africa, did not. Schweitzer heard this story and decided that it was inconceivable that he not do something because it was obvious that God was serious about that.

By world standards, most of us are rich; some of us very rich. None of us does not know that God has called us to love and serve our neighbors in need. Are we listening? Can we conceive of ways to make that happen? Do we know that God is serious about that?

I am indebted to Amy-Jill Levine and chapter nine of her book Short Stories by Jesus for much of the background of this post.