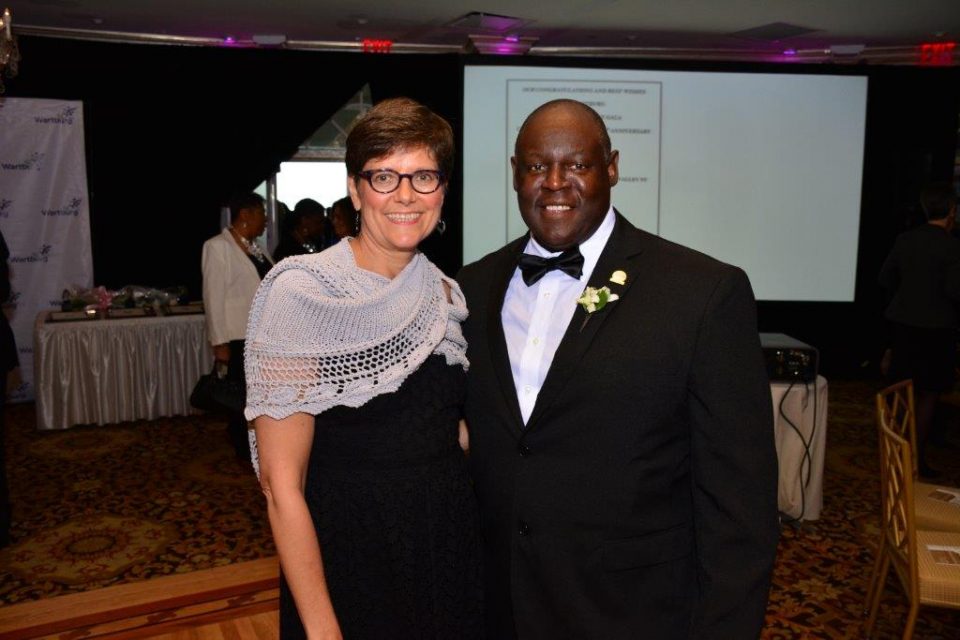 Photo courtesy of The Wartburg

Carol Fryer, ELCA pastor and director of spiritual care and church relations for The Wartburg, and honoree Larry Fair at a June gala at The Wartburg.

The year was 1969 and Larry Fair remembers being dropped off with three siblings at his new home, The Wartburg, a Lutheran ministry in Mount Vernon, N.Y., in the suburbs of New York City. He was 5 years old.

The youngest of 10 kids, Fair’s mother had died of cancer the year before, and his father, George, was struggling with alcoholism and couldn’t care for his large family. Family friends knew that The Wartburg ran an orphanage and suggested that George give up his children.

“I was too young to really understand what was going on,” Fair said. But he clearly remembers the car ride from his New York City apartment to Mount Vernon, where The Wartburg’s 120 acres seemed like a farm to a kid from Harlem. He and his siblings, George, Lee and Barbara, would call this home for years.

“I’ll never forget the welcome we got at the little boys’ cottage,” Fair said. “There was a large picnic table covered with toys. That was the best way to our heart. All the kids at The Wartburg were standing outside to welcome us—all nationalities. I was the greedy one who took most of the toys.”

Growing up at The Wartburg—a Lutheran ministry started in 1866 to house children orphaned by the Civil War—was a pleasant experience for Fair. “I can’t remember a bad time there. I was raised by a German lady named Elfriede Gross. She taught me that I had to share.”

Despite the circumstances Fair faced growing up, he is grateful for The Wartburg: “I look at things in a different way. When bad things happen, good things come through. It was a blessing to be at The Wartburg. I always appreciated where we were.”

Today, Fair is giving back to the community by running the Future Society Inc., an organization, similar to the Boys & Girls Clubs of America, that helps at-risk children. He was recently honored by The Wartburg when it celebrated its 150th anniversary.

Caring in a different phase of life

Today, The Wartburg’s mission is different from its early roots as an orphanage. It now provides comprehensive services to seniors, from a nursing home to assisted and independent living.

The Wartburg closed as an orphanage in 1979, but Fair stayed there, working in the maintenance department and kitchen. He left in 1988 when he got married, and today he is the supervisor of maintenance for the city of Mount Vernon and also oversees the city’s community-service workers.

Carol Fryer is an ELCA pastor and director of spiritual care and church relations for The Wartburg. To mark the anniversary, she has been reading up on The Wartburg’s founder, the Rev. Dr. William Passavant, who was moved by the sight of children orphaned by the Civil War and sought to establish a home for them. Its first benefactor was Peter Moller, who spent more than $30,000 to build a “living memorial” to his late son, establishing The Wartburg.

“The history of The Wartburg is so rich and fascinating and so many neat things have happened through the years,” Fryer said. “I’m very proud of the history and legacy. I pray that it continues to be the same. It’s an honor to be a part of it.”

Many of the early documents and artifacts from The Wartburg were retained, including photos, annual reports, even desks and musical instruments from the orphanage. The Wartburg hired curator Kathy Craughwell-Varda to sort through the pieces of history, coordinating a display at the Mount Vernon Library to mark the 150th anniversary. Craughwell-Varda, who has worked on many collections over the years, said that this one is among the largest and most special.

The collection, she said, provides so many opportunities for telling the amazing story of The Wartburg and its great people.

For Larry Fair, this ministry will always be home. “I may have grown up in an orphanage, but I was never made to feel like I was an orphan,” he said. “I still feel at home going to The Wartburg.”

Wendy Healy
Healy is a freelance writer and member of Trinity Lutheran Church, N.Y. She served as communications director for Lutheran Disaster Response of New York following the 9/11 attacks.