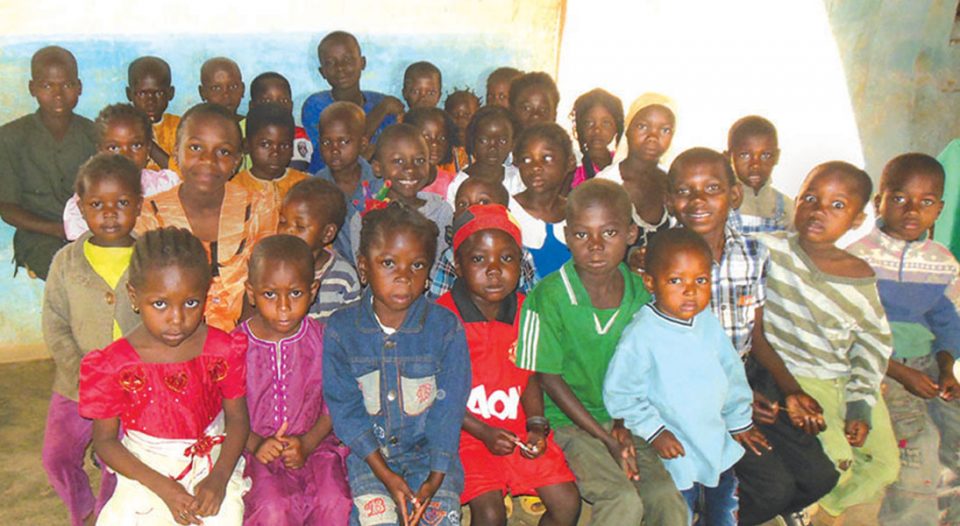 These schoolchildren from Canntonier, Central African Republic, will benefit from the curriculum translation project once it is complete.

Both churches have strong Christian education departments whose directors travel the country training and equipping teachers. But many congregations have only one teacher, aided by an assistant or two. Children ages 3 to 15 learn together in one enormous class. Lessons are drawn from one set of teaching materials. Year in, year out, the content is the same.

How, wondered Maurice Kemane, Christian education director for the CAR church, could the churches find Lutheran materials that would accommodate age differences and add variety?

From South to West Africa

“Living Together in Christ,” developed by the Lutheran Communion in Southern Africa, met these goals. With four teacher manuals, each containing 54 stories, the series is based on Lutheran theology, full of age-appropriate student activities and offers plenty of strategies for teachers.

One problem: the four-year curriculum was in English. The primary language in CAR is Sango; in Cameroon, it’s French.

In summer 2013, Susan Smith, an ELCA missionary serving the CAR church as education adviser, worked with Kemane and Joseph Ngah, Christian education director for the church in Cameroon, on a process for securing and translating the materials. But the process was delayed when conflict broke out between rebel forces and the government the next month. Many people were displaced.

“CAR has had coup d’etats in the past,” Smith said, “but the coup of 2013 was different because the fighting lasted much longer and has caused a great deal of destruction and fear.”

Smith was evacuated from Baboua on Christmas Eve and again on Palm Sunday 2013. She spent the remaining three years of her service living in Garoua Boulaï, Cameroon, continuing to work with the CAR church.

For most people, life went on—with interruptions as conflict “hot spots” moved around the country. When insecurity intensitfied in Baboua, “people would go to the Lutheran station (church grounds) to sleep, because they felt safer there than in town,” Smith said.

Kemane continued to equip the Sunday school teachers, who still taught and urged youth to share their gifts in congregations and the community.

“Sunday school has changed a lot in the past four years,” he said. “[Youth animate congregations] through choirs, projects and presence. Several groups have raised money to buy metal roofing for church-related buildings. Some help plant and tend fields that produce foods for the faithful or to sell to provide resources to the congregation.”

Last January, Kemane and his assistant Jean Diouf Ndoungue traveled to Garoua Boulaï with a U.N.-escorted convoy. Joined by Smith, Ngah and his assistant Bernatte Mboudga, the team spent a day drafting plans to implement the translation project.

“The sense of the meeting was, ‘Alleluia! We have started!’ ” Smith said. “We knew we could figure out the rest as we went along, with the help of God.”

The first manual is now being translated into French. The Cameroon church will print 1,000 copies—one for each congregation and one for its catechist or pastor—plus 300 more for French-speaking teachers in CAR to use to pilot the series. The French edition will be translated into Sango. Teachers in both countries will be trained in how to use the materials.

Eventually the two churches hope to offer the materials to other French-speaking Lutheran church bodies.

In an area where civil conflict has kept many youth from attending school, the CAR church’s commitment to education is strong. The church operates schools in 20 villages where there is no government school. Eighteen of the 20 remained open throughout the three-year civil war.

To help reach children who may have missed schooling, the translation team hired local artists to draw two pictures for each Bible story in the series, setting them in the Central African context.

While both churches are growing, “too many are converted in their mouths but not their hearts,” Ngah said.

Kemane added, “Without instructional materials, the young cannot grow in their faith. The Sunday school teachers will also increase their biblical knowledge and, hopefully, their faith as well.”