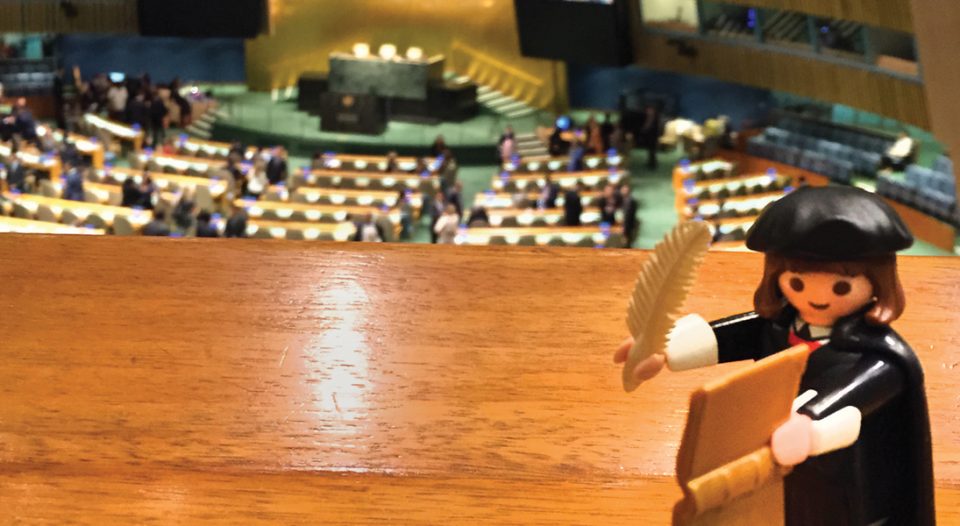 A Playmobil commemorative Martin Luther at the U.N. in New York. In Reformation times, Luther is known to have brought the voice of faith into the public sphere to advocate for those who needed assistance.

Luther and Reformation leaders on advocacy

The Forgotten Luther: Reclaiming the Social-Economic Dimension of the Reformation, edited by Carter Lindberg and Paul Wee (Lutheran University Press, 2016)

Chapters in this book come from theologians who have looked at Reformation-era attitudes toward the “social ministry” and “advocacy” side of church life. They contend that many have missed this aspect of the 16th-century Reformation.

In 1521 the Wittenberg town council passed the first “social welfare ordinance” with Martin Luther’s assistance, providing interest-free loans for small businesses, aid to orphans and widows, and health care for the poor, Lindberg said. Luther is known to have said that it is the duty of “the prince,” that is, the government, “to help the poor, the orphans and the widows to justice and to further their cause.”

Faith-based advocacy isn’t “political” in that it does not attach to a particular party or ideology. Advocates report working with Republicans, Democrats and Independents. “It’s not simply bipartisan, it’s nonpartisan,” said Paul Ostrem, an assistant to the bishop in the Southeastern Iowa Synod and an ELCA advocate.

People can agree on the problem but disagree on solutions.
“I talk to very few people who would disagree if you say people do not have enough to eat,” Ostrem said. “But individuals may differ in how they address that situation.”

ELCA social statements, approved by a churchwide assembly after considerable prayer and study, are the basis for the church’s advocacy work. The social statements are guides connecting faith and public life, Scripture and issues facing today’s world.

ELCA social statements can be found at elca.org/socialstatements.

Witness as a whole church