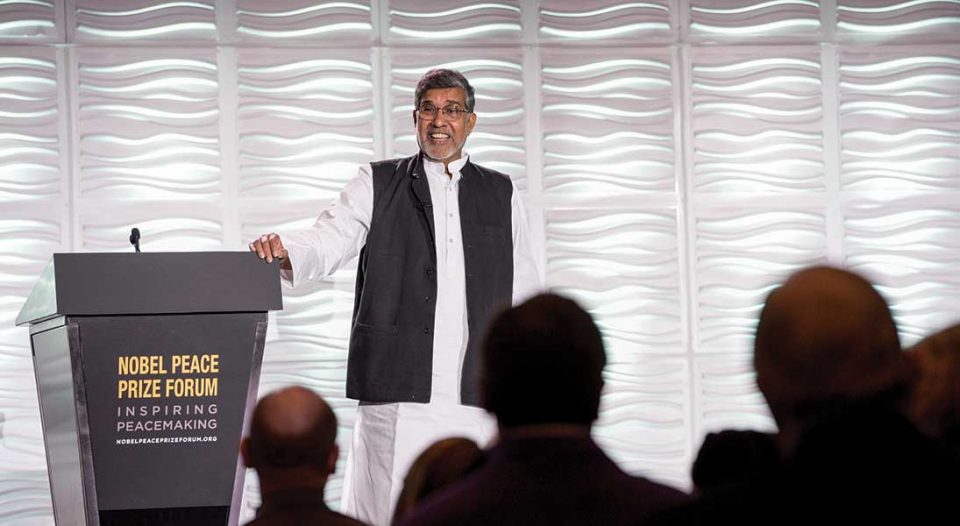 The keynote speaker of the 28th Nobel Peace Prize Forum was Kailash Satyarthi, the 2014 Nobel Peace Prize laureate who is known for his work to end child trafficking. The forum features a Nobel laureate every year, as well as other national and global leaders.

When Augsburg College graduate student Howie Smith attended the 28th annual Nobel Peace Prize Forum in Minneapolis in June, he wasn’t sure what to expect. But from the moment the lights went up and Kailash Satyarthi, Nobel Peace Prize laureate, walked onto the stage, Smith knew he was in for an amazing experience.

“Everywhere you turned, you would learn something new and powerful,” Smith said of the three-day event. “Some of the stories were absolutely gut-wrenching and heartbreaking, but it was truly incredible to be a part of everything.”

Smith was one of more than 300 people who attended this year’s Nobel Peace Prize Forum, an annual event that brings together Nobel laureates with national and global leaders of all backgrounds. One of only three programs associated with the Norwegian Nobel Institute in Oslo, Norway, the event provides a unique opportunity to engage both students and the larger community in peace-building, with attendants participating in person and remotely from around the world.

Past forums have featured laureates such as President Jimmy Carter and the Dalai Lama. This year’s guest, Satyarthi, is a 2014 prize winner who has spent several decades helping end child slavery and trafficking.

“It’s a pretty powerful experience,” said Joe Underhill, program director for the forum. “These are modern-day heroes that we get a chance to interact with. They’re people who have stood up to incredible challenges and risked their lives in the cause of peace and justice.”

While hosted by Augsburg, the forum is a group effort that brings together many organizations, including Lutheran and interfaith institutions, to organize and sponsor the event. As one of several Lutheran schools with a tie to the Nobel Institute, Augsburg has been involved with the forum since the beginning, though it’s only in the past handful of years that it became the official host.

The forum provides students and the public a chance to hear a laureate’s story firsthand. For students, it’s also an opportunity to meet and network with leaders from around the world. A number of undergraduate and graduate classes at Augsburg even build themes or aspects of the coming year’s forum into their curriculum or readings.

History professor Jacqueline deVries has been involved with the forum for the past 22 years and has seen it shift and evolve over time. For the past two years, she’s co-taught a course called “Navigating Local and Global Conflict,” which draws heavily on the forum. “It becomes one grand case study for us,” deVries said.

Smith, who is working toward a master’s degree in leadership, was one of deVries’ students and attended the forum as part of the class. Apart from the main sessions, which focused on Satyarthi’s child trafficking work, attendees could choose from several smaller breakout sessions, including discussions on migration, refugees and climate change. Smith appreciated that students were allowed to pick which ones they attended based on their individual interests.

Though the forum was held in the summer this year, current plans are to schedule it again during  the school year to increase student participation.

“I think that is really the future of the forum,” Smith said. “Getting people excited in their teens and 20s and staying invested in these issues as they get older.”

Underhill wants to encourage further student involvement by connecting more curriculum and expanding programming in the future, including more skills-based work and finding ways to connect to topics that students can relate to directly.

“We want students to think about what it means to be a peacemaker in their daily lives,” Underhill said.

Each summer two students from each school are selected to spend seven weeks in Oslo. The program is “designed to deepen students’ understanding of the central issues and theories regarding conflict, war and peace,” according to its website (peacescholars.wordpress.com).

As for Augsburg, Underhill said the forum is “a clear example of what we aspire to be as a college—grounded in a set of values and traditions that call us out in service to our neighbors in the world, as people committed to justice and the values espoused by the Lutheran church. Those values inform the work of the forum and allow us to engage with people who live them out in the most dramatic of ways.”

“Above all, it’s deeply inspiring,” deVries said. “When you come, you’re not just a spectator; you’re a delegate. The forum is an antidote to pessimism and despair. You’re empowered to see how you can build peace in your world.”