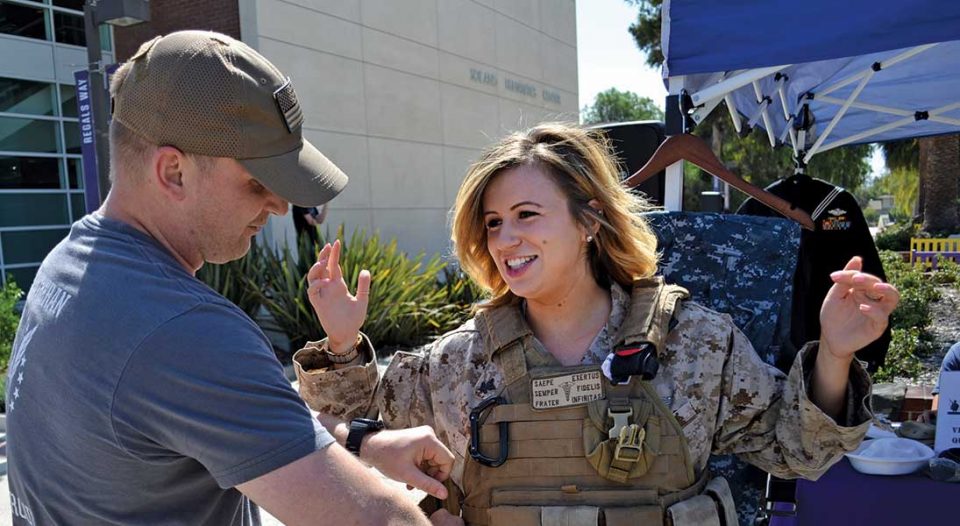 As part of “Ask a veteran day,” students from the veterans’ club at California Lutheran University, Thousand Oaks, shared their experiences with classmates. David Castle, a Navy veteran, shows Olivia Steinfeld gear he wore while on active duty.

Ask veteran Michael Gonzalez what he’d like his fellow citizens to know about him and he’ll say: “A lot of people think veterans are broken or have PTSD (post-traumatic stress disorder). While some people do, it doesn’t mean they can’t have fulfilling and normal lives. We [veterans] are normal people who have lived by a different culture for years and need some time and maybe some help to readjust to society.”

Gonzalez served in the Air Force for six years. Today he’s a senior at California Lutheran University, Thousand Oaks, and president of its veterans’ club. In September the group hosted an “Ask a veteran” event to raise awareness on campus around issues affecting veterans.

The event was about making connections between club members and their fellow students, he said, adding, “We all had different jobs in different branches and have a lot of stories to tell. It was just as much for the veterans as it was for the [other] students.”

There are approximately 19.3 million veterans like Gonzalez and his classmates, each with a unique story to tell. While some 9.4 million are 65 and older, the number of veterans under 35 is now around 1.7 million as they return from recent deployments in Afghanistan and Iraq, according to a 2014 survey lifted up by the U.S. Census Bureau.

Their reasons for serving are varied. “Many people enter service for a very patriotic reason, they have a sense of call to serve their nation; for others, they aren’t able to find a job that’s fulfilling; for others it’s a fresh start,” said Lori Kleppe, an ELCA Navy chaplain who has worked with hundreds of recruits throughout an eight-week basic training at Recruit Training Command, Great Lakes, Ill.

Many are young adults, some fresh out of high school. “Many come in wanting an education with the [post-9/11] GI bill,” she said.

Today there has been a surge in the number of veterans returning to school, said Jenn Zimmerman, veterans coordinator for Cal Lutheran.

A Navy veteran herself, Zimmerman transferred to the university in 2011 looking to complete her degree. At the time she was in her early 30s and raising two children on her own. “I got here and I tried to make friends … [but] I had a hard time fitting in,” Zimmerman said.

That’s when she decided to start a veterans’ club. “It was amazing. I met these other veterans and we could chat about our time in the military,” she said.

Yet Zimmerman felt there was more work to do, so she went to the administration and told them they were underserving the veteran population on campus. Out of this Zimmerman landed a university internship to study best practices for veterans. In 2012, after delivering recommendations to the administration, Zimmerman graduated and found work in the area.

Four months later she got a call from Cal Lutheran encouraging her to apply for a new position as veterans coordinator, a role she began in 2013. Two years later the university opened its first veterans center, and the school is now attracting and graduating more veterans, she said.

“Now we have this one-stop shop for our veterans, meaning we are able to care for the whole person in a way we previously couldn’t,” said Melissa Maxwell-Doherty, the school’s vice president for mission and identity. “One of the ways we talk about vocation is we describe it as purpose … what the world, what God, is calling me toward. You can see this in Jenn.”

The question of purpose is one Zimmerman often takes up with the student veterans she works with on an everyday basis. For those fresh out of the military, “it’s an identity crisis. Every aspect of life is planned out. When you leave the military you leave all of that. People have to find themselves or redefine themselves,” she said.

Fredi Eckhardt, an ELCA pastor and chief of chaplain services at the Corporal Michael J. Crescenz VA Medical Center in Philadelphia, and her team encounter similar sentiments from the veterans they see every day. In the past 20 years the center has received younger veterans coming in from Iraq and Afghanistan. They range in age from their 20s to 50s as a large portion of those who served in these conflicts were in the Reserve or National Guard, Eckhardt said.

“It’s important for people to know that these veterans come back feeling isolated and misunderstood,” Eckhardt said. “Less than 1 percent of the U.S. population has been directly involved in these conflicts—that’s compared to Vietnam veterans and that was 7 percent.”

One veteran Eckhardt met witnessed the World Trade Center collapse on Sept. 11. That’s when he decided to enlist. But he returned from deployment disillusioned and depressed. “You hear a lot of ‘This isn’t what I signed up for,’ ” she said.

A pervasive issue facing many of the veterans Eckhardt and her staff meet is moral injury. “It’s about feeling betrayed—there’s guilt and grief,” she said. “You failed to prevent something you should have done to make the situation better or you witnessed something that deeply violates your moral beliefs and expectations.”

At the VA medical center, Eckhardt and her chaplains are often the first to meet with veterans before referring them to medical professionals. Chaplains accompany veterans in the challenges they face by actively listening and being a calming presence. “This is how we’re preaching the gospel every day—we’re not always using words,” she said. “We go that extra mile, give people time.”

★ The 2016 ELCA Churchwide Assembly passed a memorial on supporting military personnel, veterans and their families. As part of that memorial, congregations are called to raise their voices in prayer for all who have served in the U.S. military on the Sunday closest to Veterans Day (Nov. 11).

★ Contact your synod office to connect with your “centurion contact,” a volunteer who can offer ideas for ways to care for veterans and their families.

Showcasing the voices of veterans