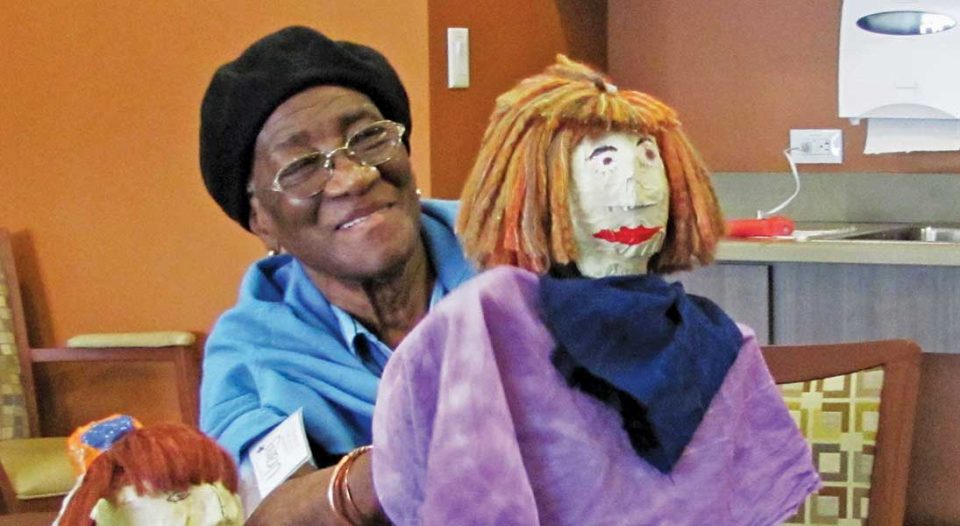 Courtesy of The Wartburg

Puppetry has been proven to be an excellent tool for senior expression at The Wartburg, a Mount Vernon, N.Y., care center.

The baby-boom generation began turning 65 in 2011, ushering in a period of rapid growth in the aging of America. The 65 and older group is projected to hit more than 70 million in less than 15 years.

As boomers move into the next phase of life, ideas of how to best serve them are changing as well. Approaches to care are becoming more holistic, focusing on quality of life. Long-standing Lutheran social ministries are addressing not only physical aspects of aging but social, emotional and spiritual dimensions as well.

“As a network, our members are the largest nonprofit group serving seniors today, with about 200 of its 300 agencies providing such service,” said Charlotte Haberaecker, president and CEO of Lutheran Services in America (lutheranservices.org).

The network builds on the Lutheran tradition of serving the whole person in ways that for-profit organizations can’t, she said, and they’re doing it in innovative ways.

Quality of life for many seniors comes down to retaining their independence at home for as long as possible. Rising costs associated with assisted living facilities provide more motivation to delay the transition. To help, Lutheran agencies are creating home and community-based services for seniors.

Aging in place can be particularly difficult in rural areas with limited access to medical care. Hospitals and nursing homes are closing in these areas, creating care gaps. To tackle this problem, Lutheran Services in America, Lutheran Social Services of North Dakota and Lutheran Social Service of Minnesota launched the Great Plains Senior Services Collaborative. The three-year project offers services for seniors that can be adapted and replicated, including Volunteer Connections in North Dakota and Abundant Aging in Minnesota.

In both programs a staff member goes to underserved rural communities to promote discussion of the needs of an aging population and encourages local congregations and agencies to start new programming. The goal is to keep seniors engaged and offer them a network of resources, including volunteers who offer practical assistance such as driving people to medical appointments.

In another program, caregivers in rural areas of Minnesota are given iPads so they can receive real-time coaching support when issues arise. The collaborative’s academic partner is North Dakota State University, Fargo, which will evaluate the program to help expand the services that prove most effective.

Healing arts
The needs of the aging go beyond support to remain at home. Healthy aging addresses the whole person. The satisfaction found in creative ventures, for example, doesn’t diminish with age. Art has many benefits for older adults, including reducing depression, promoting social interaction and improving brain function, wrote author and professor Barbara Bagan in “Aging: What’s Art Got to Do With It?” (Today’s Geriatric Medicine).

Recognizing the power of art to enhance quality of life, The Wartburg, a Mount Vernon, N.Y., care center, has “Creative Aging,” a program that serves nearly 500 seniors. It offers opportunities for creative expression through art, including painting, drumming, dance, ceramics and even improvisation.

“Creative Aging goes beyond therapeutic recreation,” said Angela Ciminello, a Wartburg development officer. The program, which was featured on PBS’ Visionaries series, began by using a barter system model. Artists would receive studio or rehearsal space in exchange for offering a weekly arts program for residents. It soon became clear that both residents and artists benefited, with artists often becoming long-term volunteers.

In a program led by professional theater artist Josh Rice, participants made papier mâché puppets and then performed with them. Some of the least communicative participants became surprisingly expressive when speaking through their puppets.

“There was such pride of accomplishment and such acclaim from their peers,” Rice said. “It was incredibly uplifting for them and for me.”

Art programs such as The Wartburg’s help institutions feel more like communities, sparking moments of joy and bringing people together.

When life ends
One aspect of community that has traditionally been a challenge for nursing homes to manage with grace is the loss of a resident. Long-standing practice in many nursing homes is that after a resident dies, the body is loaded on a gurney and wheeled quickly to a back loading dock, with staff hurrying to close the doors to resident rooms. A new resident is often quickly moved into the vacated room with little or no transition period.

These attitudes and practices are now evolving. Led by chaplains, long-term care communities operated by Lutheran Services Carolinas are transforming institutional attitudes toward death by treating it as a natural life passage, with an emphasis on soul-nourishing rituals. “We don’t act as though death is a shameful secret here,” said Beth Woodard, chaplain for Trinity Glen, a nursing home in Winston-Salem, N.C.

Staff at the agency’s nursing homes are typically alerted to a resident’s passing by an announcement over the public address system, such as “Code Angel” or “Guardian Angel.” That signals staff to gather at the resident’s room for a service of commendation or to line the hallways to show love and respect as the body—often covered with a special pall—is taken to the front of the building where a service may also be held.

Lifelong Lutheran Kaye Hirst recalls the emotional impact of seeing the corridor “solid with people” on both sides as she escorted her mother’s body to the front entrance of Trinity Oaks in Salisbury, N.C. As her father approached the end of his life months later, staff and family, led by the chaplain, Brenda Bynum, gathered in his room to share stories and sing hymns.

“I think we sang Daddy into heaven,” Hirst said. “It was just beautiful, absolutely beautiful, knowing how much [the staff] cared.” Haberaecker said, “Lutheran social ministries go above and beyond. We want people to live with dignity, respect, compassion and to have abundant lives.”