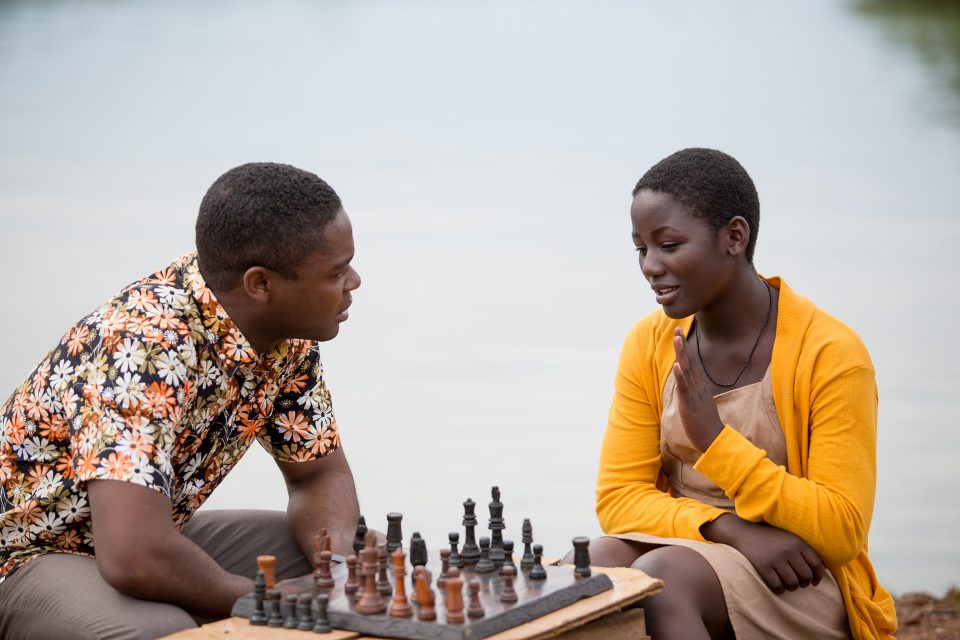 David Oyelowo is Robert Katende and Madina Nalwanga is Phiona Mutesi in Disney's QUEEN OF KATWE, the vibrant true story of a young girl from the streets of rural Uganda whose world rapidly changes when she is introduced to the game of chess.

Director Mira Nair is at the helm of this enthralling drama about Phiona Mutesi, a 10-year-old chess champion from Uganda. In a world where many girls are still treated poorly, can’t go to school, and are denied access to success in business and the marketplace, here is the inspiring true story of Phiona, who lives in poverty in a shantytown outside Kampala, Uganda. Opportunities open for her when a missionary invites her to join the community chess club and she proves to be a prodigy in local and national competitions.

This isn’t just a sports movie. It also reveals how youth can develop self-confidence and resilience from a caring mentor and the support of their families. One exchange in the film illustrates how this can happen. Phiona has convinced herself that she isn’t good enough to achieve her dream of being an international chess master, given where she comes from. She says: “Coach, you told us to make a plan but I fear things will never change.” Coach Katende replies, “Losses happen for all of us. But what matters is when you reset the pieces and play again” (Walt Disney Studios, PG – for thematic elements, an accident scene and some suggestive material).

The Market as God by Harvey Cox

Harvey Cox taught at Harvard Divinity School from 1965 until his retirement in 2009. His theological analyses of the contemporary cultural scene are always characterized by an informed sensitivity, sharpened discrimination and an ethically awakened conscience. In this book, he describes the market as an ersatz religion with its own all-encompassing worldview, priests and rituals, doctrines and theologies, saints and prophets and “zeal to bring its gospel to the whole world and win converts everywhere.” With flashes of brilliance and focused energy, Cox charts the ways in which the market became divine and even achieved human status through the form of the corporation. Tapping into the ideas and ideals of the book of Genesis, the Epistle to the Romans and St. Augustine’s City of God, he points out that there are plenty of alternatives to the pseudo-religion that idolizes the market (Harvard University Press).

What Is a Child? by Beatrice Alemagna

In this elegantly illustrated picture book, Beatrice Alemagna challenges children and adults alike to celebrate the pleasures of being young while exercising our memories, delights and gratitude. Children have small hands, feet and ears but their ideas are very mobile and gigantic. Perhaps that explains their penchant for wanting to have shiny shoes, to eat lollipops for breakfast and to hear the same story every evening. One of their many gifts is that “they keep a mystery inside them. So that even as grown-ups they will be moved by little things: a ray of sunshine or a snowflake” (Tate Publishing).