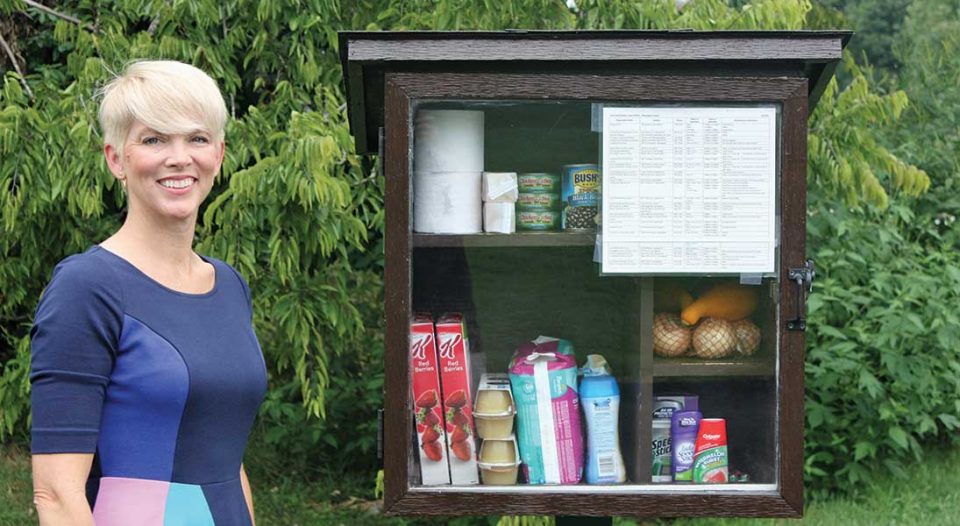 Jessica McClard started the Little Free Pantry to help address food insecurity as a community. “When you go to where people are, miraculous things happen,” she said.

What started as one woman’s idea for making a difference in her neighborhood has turned into a global phenomenon.

Jessica McClard, a member of Good Shepherd Lutheran Church in Fayetteville, Ark., started the first Little Free Pantry to help people who are food insecure in her town. She was inspired to start the community exchange pantry after seeing several Little Free Libraries pop up in her neighborhood. “I’ve always been interested in grassroots movements, and I started to wonder if that same concept, which had already become viral, might also be used to address another issue that I perceive to be a quality of life issue,” McClard said.

With the help of a $250 Thrivent Action Team grant, McClard purchased supplies for the Little Free Pantry, which is a small kitchen cabinet-like box on a post with a couple of shelves for holding food and basic household items.

In looking for a location to stake the pantry, McClard decided to post it on the grounds of Good Shepherd. “I wanted a spot that would have good visibility and also be in a neighborhood setting so there would be a community to support it,” she said.

McClard stocked the pantry for the first time in May, filling it with family-size boxes of cereal, diapers, canned food, peanut butter, crackers, toothpaste and toothbrushes. She then went home and posted about it on the Facebook page she had created to share updates on the pantry and its construction (facebook.com/littlefreepantry).

Within two days that Facebook page had more than 900 “likes” and the project was covered by the local news. An outpouring of people began contributing to the Little Free Pantry, and McClard was soon able to estimate that certain items were being turned over (placed and then taken) in as little as 30 to 45 minutes.

“It’s all open-source and grassroots driven, so there are no designated items for donating or set times or days the pantry will be stocked,” McClard said. “I think the fact that what’s going in the pantry is random and it’s being stocked at random times and the turnover is still that short is a real testament to the need.”

When McClard would stop by the Little Free Pantry to stock it or check on its supply, she would take a photo of its current items and post it to her Facebook page, thanking the community for keeping the pantry full.

With every interaction on Facebook, the word about the Little Free Pantry spread and soon McClard was hearing from people in nearby towns who were inspired by her project to start their own. Then it grew even more, with people from all over contacting McClard on Facebook or through her website, asking for tips or sharing photos of the pantries they had started.

Some of these projects have taken a different name, such as the Blessing Box. Some are located in front of homes or in parks. They’re being started by individuals, nonprofit organizations and church groups. There have even been groups that have held picnics and bake sales as fundraisers to buy the initial supplies to start their spinoffs of the Little Free Pantry.

McClard said that any estimate for the number of Little Free Pantry projects that have started after learning about hers would be too much of a guess. But if her Facebook page, which had more than 17,000 likes at presstime, is any indication, a great number of pantries have been started thanks to her idea.

“This is beyond my wildest imagination,” she said. “So many people have been interacting with me about this project, and I love that they feel the freedom to take the idea and make it their own, make it right for what their community needs. It’s been an amazing thing to be a part of.”

The Little Free Pantry project will continue to grow. At the end of September, McClard was invited to be a guest on Harry, where host Harry Connick Jr. presented her with a check for $50,000 from Wal-Mart to keep the pantry project momentum going.

McClard thinks the simplicity of the project is part of what’s made it so popular. “I also think it’s great because it breaks down the client/provider relationship,” she said.

Clint Schnekloth, pastor of Good Shepherd, agrees, saying the pantry has widened the church’s circle. “It’s become part of our identity that we are a church that has a free pantry,” he said. “I don’t think we think of the pantry as an evangelism tool in the popular sense of that term, but it’s certainly a public sign of the theological sense of the word evangelism—to ‘good news-ify.’ Everyone who drives by it sees it as good news.”

Despite all of the media attention, McClard is quick to take herself out of the spotlight, highlighting the project itself and crediting the people who have started their own.

“The project is better because it’s free in the world,” she said. “For me, though, my faith is alive when I’m out living Christ’s mandate for how we are church in the world. When you break down barriers, miraculous things happen. This has been a tremendous blessing for me and a real affirmation of the way the Spirit moves through a community.”

To learn more about the Little Free Pantry, go to littlefreepantry.org.