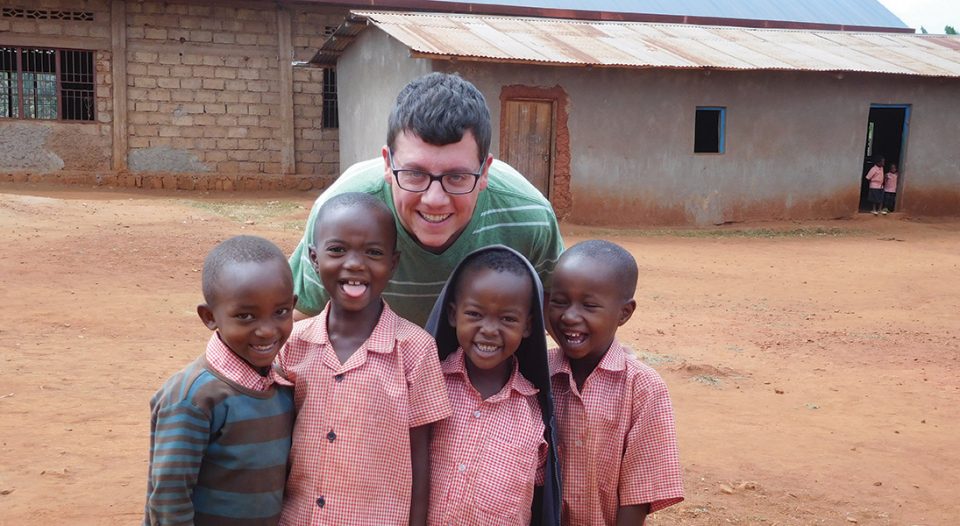 During his year of service, Ben Warner built relationships with children who attend a preschool in Rukira, Rwanda.

Living and serving in a country that has experienced genocide can change one’s opinion, career path and life. Just ask the 11 volunteers who’ve participated in the ELCA Young Adults in Global Mission (YAGM) program in Rwanda since 2014.

Back in Racine, Wis., after a year in Huye, Laura Hermanns is trying to avoid the tendency “to sit here in the U.S. and make judgments about how other countries are being run or doing things.”

Rwanda operates under a more authoritarian version of democracy, but Hermanns realized after living there that “the value of stability over personal freedom right now is totally understandable. It’s important to realize the complexity of situations and try to refrain from judgment.”

Rwanda’s drive for unity and cohesion can be seen in the Lutheran Church of Rwanda’s congregations, where Tutsi and Hutu sit side by side 22 years after the genocide that killed an estimated 800,000 people. YAGM volunteers can’t tell them apart. Rwandans can.

“We’ve put aside our difference and come together to build our country,” said Gerard Muvunyi, the church’s director for capacity building and community development. “YAGM talk about the changes they see even in one year as we work together for the betterment of everyone.”

Shaping the body of Christ

When the volunteers arrive, country program coordinator and ELCA pastor Kate Warn shares her mantra: “It’s not about you anymore. It’s about you in relationship.”

In this small country they build strong relationships with each other, the communities they serve and church leaders like Muvunyi, who opened his home to Stephanie Engel last year and Mary Braisted this year.

Life in a household that includes Muvunyi, his wife, grandmother, four children and a YAGM volunteer underscores “that we are one body of Christ,” he said. “What Stephanie had she could share with us, and what we had we shared.”

Relationships also shaped Savanna Sullivan’s daily routine in Rwanda. She often spent extra time with a student at the church’s Rwamagana School or would linger in the morning to chat with her housemother, Mama Erik. “My schedule was really dictated by the people I was with rather than the activities I was doing,” she said.

That wasn’t easy for the self-described type-A personality who values punctuality and productivity. Sullivan said she eventually realized that people perceived her competence “not by how much I produced, but by how caring I was, how much time I spent in conversation trying to get to know them. It was great for me to learn that.”

Ben Warner served a preschool sponsored by the largest Lutheran congregation in Rwanda and lived with Martin Habiyakare, working alongside the retired Lutheran pastor in his fields to produce food for the household. The hospitality he experienced was a game changer, he said.

Warner had wanted to use his Spanish-language skills to assist immigrants from Latin America. After serving among refugees and former refugees in Rwanda, he is now looking for a job in the Twin Cities working with refugees and immigrants “coming from everywhere, but especially Somalia.”

“In light of all the things being said against refugees, the fearmongering, the politics, I want to make sure there are voices out there saying, ‘You are welcome,’ ” he added. “Across the board, YAGM participants go back to the U.S. immensely grateful and moved by the hospitality they have received. It’s something they want to live out [at home].”

A national focus on justice and reconciliation has helped Rwandans recover from the genocide and equipped people from both sides of the conflict to live together once again. Through the process, the United Nations reported more than 120,000 people were able to confess their crimes, show remorse, ask for forgiveness from their community and reintegrate into daily life.

What can be learned from Rwanda’s experience?

At the Protestant Institute of Arts and Social Science, Hermanns took classes in nonviolence and participated in the peace club while teaching English to students who were studying development, education or theology.

Once she heard visiting Minnesotans give a presentation about the U.S. Civil War and segregation in the South. “Afterward, a student raised his hand to compliment the presenters,” she said. “Then he asked, ‘What kind of reconciliation is going on between North and South or black people and white?’ ”

Rwandans are “obviously not proud of their history, but they are taking a hard look at it, accepting reality and building on it,” she said. “We in the U.S. have a tendency to sweep our history under the rug.” Hermanns believes that racial tensions in the U.S., including police brutality and segregated cities, stem from not acknowledging the past and building on it.

She knows now that peace isn’t just lack of conflict, she said, but a complex puzzle whose pieces include governance, policy, health and education.

Next fall Hermanns will start a graduate program in sustainable peace-building at the University of Wisconsin–Milwaukee. Her Rwandan experience, she said, “will give me a rich experience to draw from as I study some of that complexity, how those pieces can connect to build a more peaceful society.”

Currently six young adults serve alongside companions in Rwanda through ELCA Young Adults in Global Mission. The Rwanda country program was funded by gifts to Always Being Made New: The Campaign for the ELCA. Learn more: elca.org/globalchurch.