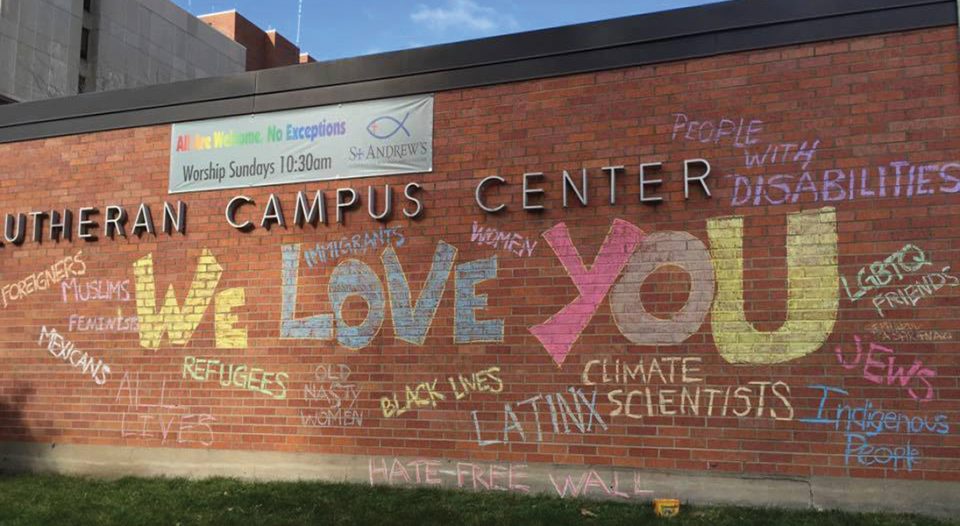 After the presidential election, students at St. Andrew’s Lutheran Church and Campus Center at the University of Illinois-Urbana-Champaign, chalked “we love you” on the outside wall of the center’s brick building along with names of groups for which they wanted to show support.

Students attending universities and colleges throughout the country understood the complexity of the November presidential election.

When the results were tallied, many looked for outlets to express their feelings. ELCA Campus Ministry—established at more than 180 colleges and universities, with cooperating congregations serving an additional 400 campuses—quickly provided avenues for all voices, regardless of political views, to share their thoughts in the days following the election.

“The most important aspect of pastoral care during this time was to provide a safe place for students to talk things out and not ostracize each other,” said David Montgomery, pastor at Toledo Campus Ministry (TCM) at the University of Toledo.

Throughout the nation, varying approaches were used.

The day after the election, students at Tyson House, an Episcopal-Lutheran campus ministry at the University of Tennessee-Knoxville, encouraged passers-by to write down prayers at their impromptu “Prayers for Our Nation” table. John Tirro, pastor at Tyson House, also brought his dog, Emma, to act as a “de facto stress animal,” he said.

The Sanctuary, a Lutheran-Episcopal campus ministry at the University of Washington, upped its usual Wednesday giveaway of coffee, cookies, tea and love in front of the campus center, offering flowers and hugs as well.

And at St. Andrew’s Lutheran Church and Campus Center at the University of Illinois-Urbana-Champaign, students chalked “we love you” on the outside wall of the center’s brick building and added the names of groups experiencing hate speech: Blacks, Mexicans, the LGBTQ community, refugees, Muslims, Jews, indigenous people, climate scientists and more.

“I think our job on campus is to care for people physically, emotionally and spiritually,” said Amy Thoren, pastor at St. Andrew’s. “The first student who walked by and wept at our wall, he had just come off the quad. He is a person of color. He just put his hand over his mouth and said, ‘Are you serious? This is opposite of everything I have seen this morning.’ He looked at me and he wept.”

Donald Trump’s victory didn’t create overnight fear and anxiety in students. In the months leading up to the election, campus pastors saw a significant shift in students’ attitudes.

“[They] were more stressed out than I’d ever seen them,” said Elizabeth Rawlings, pastor at The Sanctuary (University of Washington). “My students are primarily LGBTAQ students and students of color. The rhetoric [of the election] was definitely getting to them … . I woke up Wednesday knowing I was going to have some pastoral care to do.”

To be fair, students involved in ELCA Campus Ministry tend to be more progressive because the church is more open and affirming of LGBT marriages, Rawlings said. She personally had no Trump supporters in her ministry to serve.

But there are Trump supporters in other ministries, which is why it has been—and continues to be—so important for pastors to provide safe places for students to discuss their feelings, said Montgomery, who worked with supporters of both candidates.

“[Talking about it] is the first step,” he said. “They’ve built relationships so that they trust one another. And then this comes up, and they see some of them are polar opposite, but they greet each other with a hug. It really is a sight to behold. And it all began with the relationships.”

The activities that campus ministries provided after the election weren’t necessarily meant to be political gestures, pastors said.

But that doesn’t mean they couldn’t be construed that way.

“The gospel is political,” Rawlings said. “The Bible tells us over and over again that we are to welcome the stranger and alien because we were once strangers in a strange land. Loving your neighbor includes loving Muslims, loving people of color, loving the LGBTQ community, and that ends up getting political. I stay gospel-centered, but a lot of the time that ends up being political.”

“It’s not a reactive movement,” he said. “We’ve been trying to work toward appreciating and understanding [different] races for a while … . We have relationships now.”

Many students are asking what they do next, Montgomery said.

Montgomery said TCM is looking to introduce students to a Dialogue to Change program to combat racism with positive community change.

Several campus ministry teams have a weekly dinner/worship service open to the campus, and many will be shifting their topics of conversation to focus on social justice issues. Rawlings even plans to invite speakers to discuss how to have compassionate discussions with people with whom you disagree.

Thoren and her ministry are arranging a visit to a local mosque with an international student who has become a friend of St. Andrew’s.

“As significant as the election is, I don’t think it’s the main game,” Tirro said. “The main thing is how we relate to each other. I think it was Ghandi who said, ‘Be the change you want to see in the world.’ … Hopefully, that will give rise to a field of candidates in the future where everyone feels they have someone to vote for and we get a result that is less divisive.”