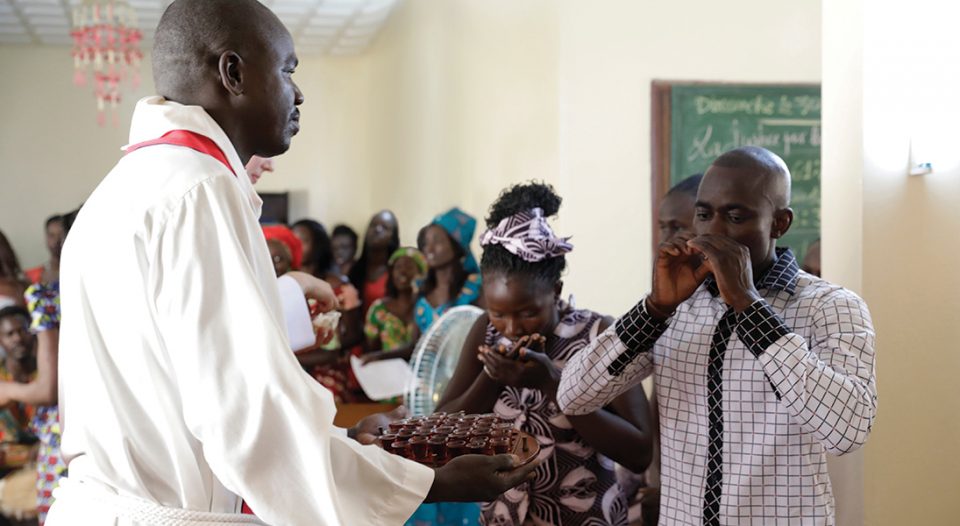 Adama Faye, pastor and vice president of the Lutheran Church of Senegal, delivers communion to worshipers in Dakar, Senegal.

Celebrating the global church in 2017

Adama Faye, pastor and vice president of the Lutheran Church of Senegal, delivers communion to worshipers in Dakar, Senegal. The church in Senegal receives funding to train new leaders like Faye through “Always Being Made New: The Campaign for the ELCA.” 2017 marks the fourth year of the ELCA’s five-year comprehensive campaign, during which members are encouraged to make gifts to fund its work as a global church. These donations will support missionaries, scholarships for international women leaders and evangelism projects with global companion churches. Learn more at elca.org/campaign.

At its meeting Nov. 10-13 in Chicago, the ELCA Church Council adopted “Called Forward Together in Christ—ELCA Strategic Directions 2025,” which provides a framework for leaders across the church to realize common goals and meet challenges the church may face in the future. The document is the result of a process that asked the ELCA’s 3.7 million members to provide ideas and feedback about the future of the church.

During the meeting, Presiding Bishop Elizabeth Eaton announced a $3 million gift to the ELCA Fund for Leaders, which will provide full tuition seminary scholarships for 60 additional students over the next three years. In related news, Eaton also announced a new leadership initiative to inspire ELCA leaders to seek out and encourage people in their congregations and communities to consider a call to ministry.

Among other business, the council requested the development of a social message on human rights; approved a revised 2017 fiscal year current-fund spending authorization of $67,210,025; approved a resolution to stand with Eaton as she supports the Standing Rock Sioux Tribe; and established a task force to consider whether the ELCA Foundation should be separately incorporated.

ELCA Presiding Bishop Elizabeth Eaton and Episcopal Church Presiding Bishop Michael B. Curry issued a joint statement on Dec. 1, World AIDS Day: “We encourage Lutherans and Episcopalians near and far to stand in solidarity with all persons living with HIV, and to continue the difficult work of building an AIDS-free generation. We recommit ourselves to a future free of this pandemic.”

On Nov. 18, Shoulder-to-Shoulder hosted a press conference during which Muslim, Christian, Jewish and Buddhist faith leaders gathered in Washington, D.C., to observe the daily Muslim prayer service. “We call on the president-elect to forcefully denounce speech and actions negatively targeting the Muslim community, including the proposal to require the registration of Muslims in the country,” the statement said. The ELCA is a founding member of the interfaith organization. View the video at youtube.com/elca.

In the past the Roman Catholic Church in Rwanda has been accused of playing a role in the 1994 genocide, but never apologized. But on Nov. 20, Roman Catholic bishops in Rwanda issued an apology for the role played by individual clergy and church members in the killing of nearly 1 million ethnic Tutsis and Hutus. The apology was read aloud in all Catholic churches that day in the local Kinyarwanda dialect and came at the end of Pope Francis’ Jubilee Year of Mercy.

During a Nov. 15 ceremony, the Lutheran School of Theology at Chicago returned a rare 9th-century Greek manuscript of the complete New Testament to the Greek Orthodox Church. Known among biblical scholars as Codex 1424, the manuscript was one of many taken in 1917 from the Kosinitza Monastery. His Eminence Archbishop Demetrios, in the U.S., received the manuscript from James Nieman, seminary president. Presiding Bishop Elizabeth Eaton said, “The action of a Lutheran seminary returning this 9th-century New Testament manuscript to the Greek Orthodox Church is an expression of the essential partnership between theological education and the Lutheran-Orthodox relations.”

On Nov. 14, Presiding Bishop Elizabeth Eaton announced her support of the Standing Rock Sioux Tribe, which has been resisting the development of the Dakota Access Pipeline. “Acknowledging the complexity of this issue and the limitations sin places on human decisions, I believe that we are called as a church to support the Standing Rock Sioux Tribe: to stand with the Tribe as they seek justice, to encourage our congregations to pray for them and to offer material support, and to examine the racism inherent in our system that contributes to the current crisis,” Eaton said in the statement.

In a letter released Nov. 21, Pope Francis announced that, for the foreseeable future, abortion can be absolved by ordinary priests instead of requiring a bishop. The change was implemented on a temporary basis for the past year as part of the Roman Catholic Church’s Jubilee Year of Mercy, but the pope’s announcement means the change is extended indefinitely. “I wish to restate as firmly as I can that abortion is a grave sin,” the pope said in his letter. “In the same way, however, I can and must state that there is no sin that God’s mercy cannot reach and wipe away when it finds a repentant heart seeking to be reconciled with the Father.”

What is your congregation doing to observe the 500th anniversary of the Reformation? The editors of Living Lutheran want to hear from you! Each month we’ll post your stories in the new community section of LivingLutheran.org dedicated to highlighting Reformation commemorations across this church. Send stories of 300 words or less, plus photos, to LivingLutheran@elca.org, with “Reformation story” in the subject line.