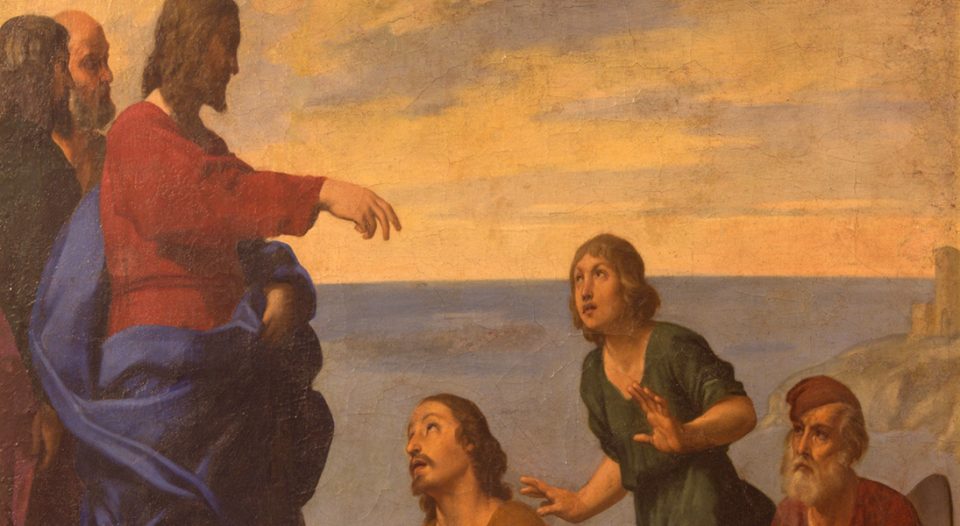 Every time I read this section of Paul’s letter to the Corinthians I think of a story my mother used to tell about the visiting preacher who couldn’t find the church where he was scheduled to preach. He stopped at a gas station. There were a few men sitting about on Coke crates, smoking and gossiping and drinking coffee. The minister got out of his car and walked over to them and said, “Can anybody tell me how to get to the Church of God?”

A man stepped forward and said, “Well, preacher, you go down here about two miles, then you go right at the post office and cross the tracks, then a left turn at the schoolhouse … naw, wait a minute, that’s the Presbyterian Church—that’s Mr. Watson’s church.” He thought a few seconds and said, “I got it. I believe you go up this here hill here, then you go left at the light and out past the VFW and it’s on the left. Nope, nope, hold on, that’s the Lutheran Church—that’s Mr. Larson’s church.” He wrinkled up his brow and pondered a few more seconds, “Now I remember—go on down Main Street here until you get to the Feed Store—then you turn left and go a mile or so and you’ll see this big ol’ graveyard—it’ll be back in behind there, down a dirt road. Aw shoot—that ain’t right neither, that there’s the Baptist Church—that’s Miss Peabody’s church.” The man though a few more seconds, “You know what, preacher, I don’t think God’s got a church in this here town.”

“I am one of Paul’s people.” “I am one of Cephas’ people.” “I’m one of Apollos’ people.” And for the hyper self-righteous people, “I belong to Christ.” Paul’s remedy for all this infighting and fussing and back-biting was what, in another place, he called the foolishness of the cross, the ridiculousness of the gospel story. He calls upon the Corinthians to remember the highly unlikely way God has chosen to save the world—the foolishness of the cross.

In this season of Epiphany, we find ourselves looking at the world’s continued darkness: its wars, disease, ignorance, prejudice and violence. Looking closely, we see at the root of most of this is humanity’s disconnectedness—our alienation from our true selves, from each other, and most of all from God. It is this lack of genuine, open, trusting, loving community and connection that either causes most of the world’s problems or makes them worse.

In the midst of all this darkness and disconnection, the church is called to shine the light of God in Christ into the world. We are invited to be a part of God’s intention to pull the world’s disparate peoples into one community, one interconnected and interdependent family, one kingdom of heaven, one beloved people—the people of God.

This calling has never made much sense to the world. It looks to most people like a quixotic quest, a nonsense proposition. The world operates by a different set of rules. Perhaps it’s not exactly cut-throat, dog-eat-dog out there, but it certainly is “Look out for number one, and know who your friends are, and you scratch my back and I’ll scratch yours.”

When Jesus walked by the Sea of Galilee and called to his side “Simon, who is called Peter, and Andrew his brother;” then a bit later “James the son of Zebedee and his brother John,” we can be pretty certain that those who watched them walk away felt that those who went were fools.

On the face of it, it doesn’t make a lot of sense, does it? Matthew makes it clear that these men were gainfully employed commercial fishermen—casting their nets, out in their boats. And, in the case of James and John, we know immediately that they were turning their backs on commitments to family members, “they left their boat and their father.” For what? To fish for people? What does that even mean? Where’s the profit in that?

I was ordained 40 years ago this June. When I first went before the Candidacy Committee for permission to start seminary, one of the members asked me, “What are you giving up to enter the ministry?” I think I said something about a potential career as a teacher or something like that, but the most honest answer would have been: “Not much. I have an undergraduate degree in sociology. If y’all don’t endorse me, there’s a lot of ‘Would you like fries with that?’ in my future.” In the years since, I have had my turn to sit on the other side of that table in Candidacy Committee meetings, and I have been humbled to hear the stories of people who have walked away from lucrative careers and a well-settled life to answer Christ’s call “to fish for people.”

Now, God does not only “call” pastors and deacons and other church professionals. God calls each of us to be a part of the “priesthood of believers.” And this call will not make sense to some people in our lives. Even Jesus’ family came looking for him after he went out on his preaching, teaching, healing tour. They wanted to take him home because they thought he was acting crazy and embarrassing the family. Each of us must look at our lives and decide: “What, or sometimes who, must I give up in order to follow Jesus, to walk the way of the cross, to fish for people?”

To be God’s church in the world—not our church but God’s church—is to fish for people, to cast out nets of forgiveness and vulnerability and risk-taking, nets that are held together with the little crosses of suffering we bear for one another every day. We are called to cast these nets across the great chasms of division and distrust, fear and hatred that afflict and terrorize our world. We are to cast out nets that seek to bring all those who have lived in great darkness into the great light of God’s love.

Jesus call out to us, the same as he called out to Peter and Andrew, James and John. We too are called to a ministry of connection, a ministry of casting nets of love and forgiveness toward God’s people, a mission of shining the light of God’s love on everyone. Will we embrace this ministry? Are we prepared to let the light of Christ shine through us? Are we willing to reach out to the world with the foolishness of the cross? Are we ready to fish for people?