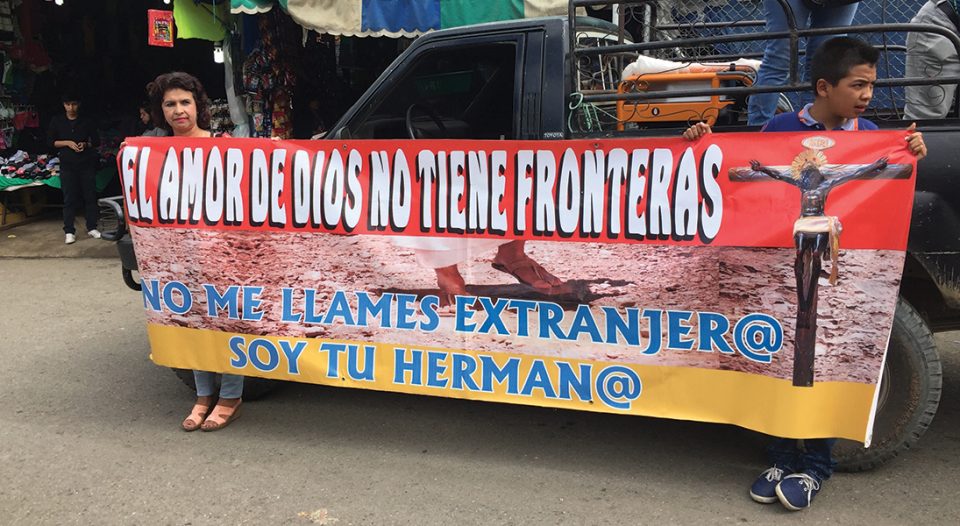 The Lutheran delegation that visited the Guatemala-Mexico border encountered a group with this banner, which reads “God’s love has no borders. Don’t call me a foreigner, I am your brother/sister.”

A man in flip-flops, dirty jeans and a worn T-shirt sat on a rickety chair in a migrant safe house in southern Mexico. His two teenagers stood beside him. Holding his head in his hands, he said, “I’m just so thankful my daughter wasn’t raped in front of me.” The day before Mexican bandits assaulted the family while they were walking there from Guatemala.

The father decided to leave home after a gang threatened to kill his 15-year-old son if he didn’t join. They then turned on his 14-year-old daughter, saying she would become the gang’s girlfriend, a condition akin to human slavery. “I had to leave to save my kids,” the man said.

Vilchis Ibarra heard this family’s story during a trip to the Guatemala-Mexico border made possible by AMMPARO, a strategy approved by the 2016 Churchwide Assembly to address migration and violence in Central America. “I am really proud of the church,” she said. “We’re saying that we’re a church that is called to welcome, but also a church that understands that those people shouldn’t have had to face the dangers they did.”

In Spanish, amparo means the protection of a living creature from suffering or damage. The program’s full name, Accompanying Migrant Minors with Protection, Advocacy, Representation and Opportunities, is the ELCA’s answer to serving children who are forced to flee their communities because of violence, poverty, environmental displacement or lack of opportunities in El Salvador, Honduras and Guatemala.

“We’re working with the Mennonite Social Action Commission,” said AMMPARO program director Mary Campbell. “Our goal is to work with 500 youth who have been deported to get vocational training and psychological counseling to deal with the trauma of the journey.”

Six months into the creation of AMMPARO, Campbell is looking for “welcoming congregations.” This program asks ELCA congregations to “provide pastoral and sometimes physical accompaniment to migrants who are making the journey and transitioning to life in the U.S.,” she said. “It’s different from becoming a sanctuary congregation.”

Campbell hopes to grow even more programs out of AMMPARO that address the great needs of the thousands of unaccompanied children and migrant families who come to the U.S. each year.

“We’d like to see at the end of five years that all 9,000 of our congregations know about AMMPARO and can find a place to be involved in some way,” she said. “Ninety-two verses in the Bible are about welcoming the stranger. It’s our responsibility as people of faith to walk with all people for justice and fairness, and for the potential for lives as children of God.”

A trail of altars