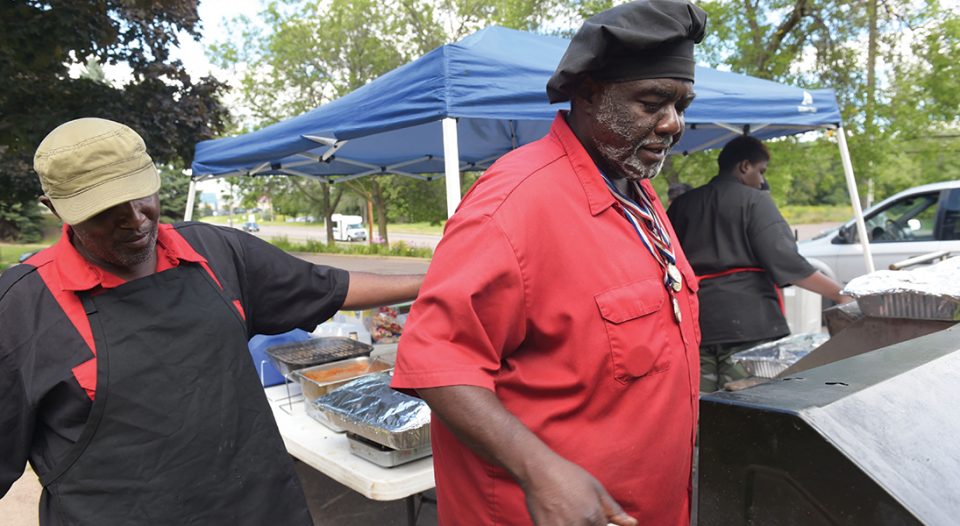 Bill Hogan serves up free barbecue—and food for thought—through “Help for the Hood.”

Big Bill Hogan’s uniform isn’t typical of a chef. From his gold and silver shoes to the bold letters that read “John 3:16” on his apron—not to mention his cape or the hat that says “Super Chef”—his attire evokes the idea of a superhero more than a cook. But for hundreds of individuals in the Twin Cities who have received free meals from him over the years, Hogan’s feeding ministry and his big heart make him no less a hero.

Hogan would be the first to give credit for his success where it’s due: “What makes me a super chef is because I’m on a mission from God. People know it’s free. They know it’s donations. They know it’s a ministry.”

Hogan, a cook for 30 years, began his ministry in Chicago, where he grew up, before moving to St. Paul. After spending time in Tennessee, California and Missouri, he returned to St. Paul, becoming a well-known fixture in the community and often feeding people on the sidewalk outside his apartment.

“At first I didn’t even look at it as a ministry. I just couldn’t see people go without,” Hogan said. “It wasn’t until 1993 rolled around that I honestly started recognizing it as a call.”

Though his feeding program officially became “Help for the Hood” in 2013, Hogan has served free meals for almost 25 years.

A two-year grant awarded last year through ELCA World Hunger provides $3,000 each year, which goes toward everything the ministry needs to keep going, including food, containers and even charcoal for the grill. Several local congregations also support the ministry financially and provide space for Hogan to set up in their parking lots. Help for the Hood also has catered private events, including weddings and employee recognition meals, to raise additional money for the ministry.

Starting each April, Hogan is out in the community serving meals three times a week for seven or eight months until the cold weather drives him indoors. By the time the ministry has wrapped up for the season, Hogan and his team have served around 4,600 plates of food.

“God just keeps working it out,” Hogan said, explaining how he’s been able to keep the ministry going. “Twenty thousand meals in five years—my feet can really feel it too!”

While Hogan’s food always includes his famous barbecue, the rest of the meal often varies, depending on the donations he receives from grocery stores or restaurants that week. Signs for the stand, which travels to different locations over the season, start back as far as a quarter of a mile from where he sets up.

During the summer, about a dozen helpers, ranging in age from 6 to 20, assist the chef in running the booth. Several of the young men, including Hogan’s son, have been helping him for five years now. His helpers receive a stipend, as well as an education from Hogan on the basics of the hospitality industry, including money management, food service and customer service.

Despite the challenges that such work presents, Hogan is grateful for the blessings that have allowed him to run his ministry for so long. “God is giving me the food I need,” he said. “He’s not giving me the amount I’d love to give away, but like manna from heaven, it’s just enough to meet their needs for the day.”

Hogan, whose talent of quoting Scripture almost rivals that of his barbecue, draws inspiration from stories of Jesus and his disciples feeding the crowds. “I use the food as a ministry,” he said. “You can’t go wrong with food. People are going to come walking—come in wheelchairs—to get it. Jesus ministered [to the crowds] both physically and spiritually. But he preached after he had their attention.”

As he looks toward Help for the Hood’s future, Hogan sees a real opportunity for churches to minister to those who come to his stand. “The souls are out there,” he said. “Every time I cast my net, I’m drawing souls.”

Hogan, who dreams of growing Help for the Hood into its own church one day, wants his customers to understand that God has provided the meal they are eating. Even if the message doesn’t quite sink in immediately, he said planting even just the seed of an idea can be enough, quoting 1 Corinthians 3:6: “I planted, Apollos watered, but God gave the growth.”

Thanks to the ministry of Help for the Hood, those who stop by Hogan’s stand may not only leave with a full stomach, but with some real food for thought.