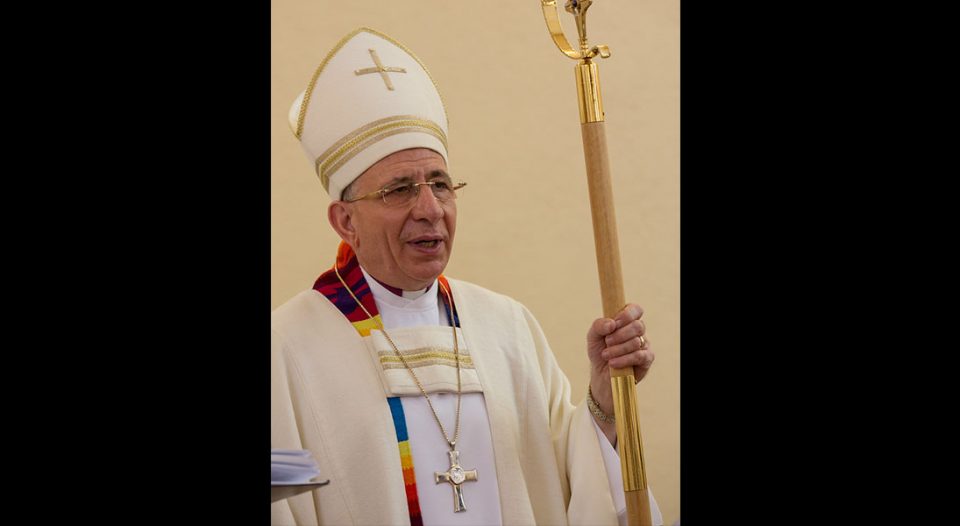 Bishop Munib Younan presides during the 2016 confirmation service at the Lutheran Church of Hope in Ramallah.

The Evangelical Lutheran Church in Jordan and the Holy Land (ELCJHL) is pleased to announce that on Feb. 20 the Right Rev. Dr. Bishop Munib Younan was named the 34th recipient of the distinguished Niwano Peace Prize for his work toward inter-religious dialogue among Christians, Muslims and Jews in Jerusalem and worldwide.

Each year the Niwano Peace Foundation (NPF) of Japan recognizes an individual or organization that has dedicated their service and scholarship to promoting peaceful cooperation among religions, particularly in places of difficulty. The NPF focuses on peace within the fields of culture, science and education.

“In a world characterized by leaders who seek to emphasize difference and hatred, Bishop Younan has consistently strived for the opposite. His work emphasizes peace over power and unity over monotheistic domination,” the NPF International Committee wrote.

“The aspiration of the Niwano Peace Prize is that it be a spiritual equivalent to the Nobel Peace Prize,” wrote Niwano International Committee member Katherine Marshall in a 2011 Berkley Center for Religion blog about the award.

The International Center for Data on Awards ranks the Niwano award in category three out of five as one of the world’s most prestigious awards. The ranking is based on factors such the award’s international influence as practitioners of award giving, the recognition of award recipients, and as a model for other awards.

The NPF International Committee is honoring Bishop Younan for his cultural work in the Middle East and globally fostering and participating in interfaith dialogue with Jerusalem’s three Abrahamic faith leaders and their communities despite historic tensions among the groups. He was instrumental in leading the ELCJHL in support of women in establishing and adopting a gender justice policy in 2015.

Last year, as part of The Marrekesh Declaration, Bishop Younan strongly promoted equal citizenship that embraces diversity in the Arab and Muslim world.

In 2014, Bishop Younan, who is also the president of The Lutheran World Federation, was awarded an honorary doctorate of theology from the University of Munster in Munster, Germany. In a statement about Bishop Younan’s contributions to peace, the university’s theology faculty said, “Munib Younan acts as an evangelical theologian and as a reconciling, bridge-builder between both religions and ethnic groups in a very conflict-laden area. … He lives and practices his evangelical perspectives in a very meaningful way, through forgiveness and reconciliation. Though bishop of a small church, he has high theological power to make his evangelical voice active in the Middle East, in active reconciliation work, ecumenical and inter-religious dialogue, and through the educational ministries of his church.”

Bishop Younan’s strong witness for interfaith harmony, for the equal dignity and respect for all people, for non-violence, and for a just peace between Israel and Palestine are qualities that are being recognized.

There will be a ceremony for Bishop Younan in Tokyo on July 27.

“I come to the table of dialogue with different religious leaders from the three faiths. I come with the suffering of my people under my skin. I come to speak on the future of the people who are living in this land. Religious leaders have a responsibility. Peace and dignity will come with how we educate and how we dialogue and we can reflect this to the politicians,” Bishop Younan said.