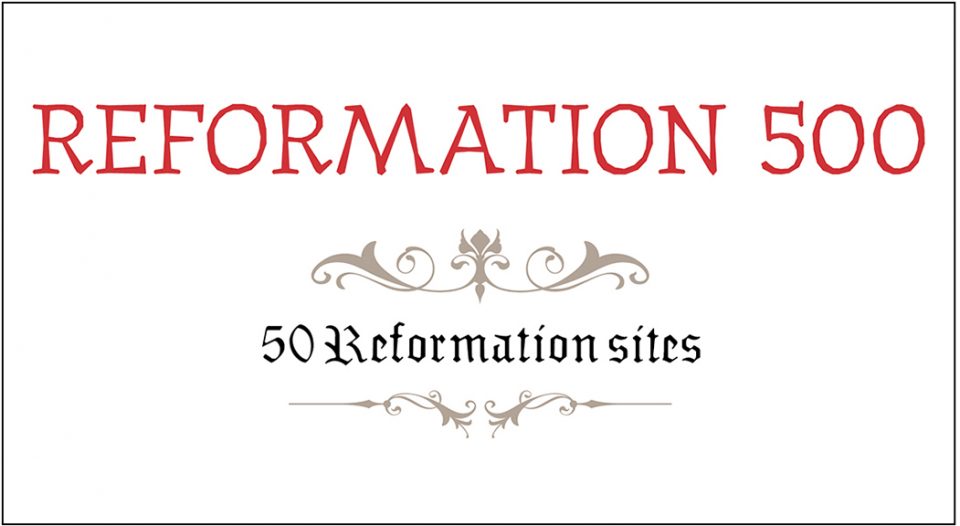 As we commemorate the 500th anniversary of the Reformation, Living Lutheran is exploring 500 of its unique aspects, continuing our series this month with 50 Reformation locations.

To research and film my public television special Rick Steves’ Luther and the Reformation, I traveled to many Reformation-related sites around Europe. Here are my 10 favorites.

Centuries before Martin Luther, a heretical group called the Cathars created their version of Christianity. The king of France and the pope wiped them out in a series of Crusades. Today the looming ruins of Cathar Castles are a reminder that Luther wasn’t the first Christian who sought an alternative to the medieval church.

Czech professor and priest Jan Hus spoke out against many of the same medieval church corruptions as Luther. But he did it in a less enlightened time, a century before Luther, and was burned at the stake. Today Hus is honored by a statue in the center of the enchanting square.

Visitors can tour a museum that includes the austere cell where the young monk spent his formative years, and the church where he struggled with his theological demons.

This staircase—believed to be the very steps from Pontius Pilate’s palace that Jesus climbed on the day he was convicted—was brought to Rome and became a magnet for pilgrims. When Luther climbed the steps on his knees (believed to reduce one’s time in purgatory), he wondered, “Who knows if it’s actually true?”

This is the small German town where Luther served as a theology professor, hammered his 95 Theses to the church door, burned the papal bull of excommunication, and—later in life—welcomed students and friends into his home.

On Oct. 31, 1517, a frustrated Luther nailed a handwritten copy of 95 theses (topics for discussion) to the wooden door of the Wittenberg town church, an event that kicked off the Reformation. While that original church and its door are long-gone, the rebuilt church in the same location is loaded with Luther lore, including his tombstone.

This castle is where Luther holed up (disguised as the bearded “Squire George”) after he had been excommunicated by Pope Leo X in 1521. In the castle is a fine little museum with artifacts and art from Luther’s time.

The home that an aging Luther shared with his wife, Katharina von Bora, is now an excellent museum displaying the pulpit from which he preached, famous portraits and the richest collection of Luther artifacts in Europe, including his original translations.

The biggest church in Switzerland, this is one of many cleared of decoration by Reformation “iconoclasts,” who whitewashed colorfully frescoed walls, trashed stained-glass windows, and smashed statues of Mary and the saints—all with the goal of decluttering the worshiper’s relationship with God, and placing a focus on the music (organ) and the sermon (pulpit).

Churches with anti-Lutheran propaganda, throughout Europe

The medieval church responded to the Reformation with the Counter-Reformation, a propaganda campaign of bombastic Baroque decor designed to dazzle and intimidate the faithful.

Martin Luther enrolled here in 1501 with the intention of studying law. He received his bachelor’s degree in 1502 and his master’s in 1505.

Luther left law school to enter the Augustinian cloister here in 1505. He took his monastic vow in 1506 and was ordained in 1507.

When Luther took a pilgrimage here in 1509—seeing firsthand St. Peter’s Basilica and the Scala Santa, among other sites—it was a formative moment in his lifelong skepticism about church practices.

In 1512, Luther received his doctorate and joined the theological faculty here. Today the Martin Luther University of Halle-Wittenberg is located in Halle, while the original campus is home to its convention center.

The Town and Parish Church of St. Mary, Wittenberg, Germany

Considered the “Mother Church of the Reformation,” it held the first celebration of mass in German. Luther preached hundreds of sermons here.

After being excommunicated by the pope, Luther was called before the Diet of Worms here in 1521 to answer charges of heresy. He was declared an outlaw in the Edict of Worms.

At the Diet of Augsburg in 1530, the Augsburg Confession, which became Lutheranism’s primary confession of faith, was presented.

While seeking protection during the Diet of Augsburg, Luther continued his translation of the Bible into high German here.

With 21 printing presses during the 16th century, this town played a vital role in spreading the Reformation’s ideas by creating and distributing pamphlets.

In 1519, Huldrych Zwingli, a leader of the Reformation in Switzerland, became pastor here and began to preach about reforming the church.

John Knox, leader of the Scottish Reformation and founder of the Presbyterian Church of Scotland, was chaplain of St. Andrews Castle in the mid-16th century.

By passing the first Act of Supremacy in 1534, the English Parliament established King Henry VIII as supreme head of the church, breaking the Church of England from the Roman Catholic Church.

Growing tension between Roman Catholics and Protestants, in part, led to the Eighty Years’ War (1568-1648). The Thirty Years’ War (1618-1648) was fueled by a Protestant rebellion against efforts to curtail religious freedom.

This series of peace treaties marked the end of both the Eighty Years’ and Thirty Years’ wars, leading to the separation of religion from the state throughout western Europe.

Luther was born here in 1483 and died here in 1546. Today it is home to Luther’s Birthplace and Martin Luther’s Death House museums.

The Church of St. Peter and Paul, Eisleben

Luther was baptized here the day after he was born, Nov. 11, 1483. The remains of the original baptismal font can still be seen inside the church.

Luther reportedly got caught in a lightning storm here in 1505. Fearing for his life, he promised to become a monk, leading to his leaving law school for the monastery. Today, the Luther Stone marks this spot.

In 1518, Luther defended his theses on the “theology of the cross” before a meeting of the Augustinian Order here. The Heidelberg Disputation, as it became known, led to the Leipzig Debate.

Luther debated Johann Eck, a defender of Catholic doctrine, here in 1519. Luther declared that sola scriptura (Scripture alone) was the true authority in the church.

Called “the Refuge of the Righteous” by Anabaptists, Strasbourg is where Martin Bucer helped lead the Reformation and where John Calvin wrote his seminal works on systematic theology.

English reformer John Wycliffe produced the first translation of the Bible from Latin into English here, where he also served as rector at Lutterworth Church St. Marys.

Archbishop of Canterbury Thomas Cranmer and others met here to discuss creating The Book of Common Prayer in 1548.

Hans Tausen, “the Danish Luther,” served as the bishop of Ribe while advocating for reform. Today, a statue of him commemorates his contributions to the Danish Reformation.

At the Diet of Västerås in 1527, Sweden was declared Lutheran, thanks largely to the efforts of clergymen brothers Laurentius and Oluas Petri.

In 1559, John Calvin founded this school, a central part of Protestant education—specifically within the Reformed church.

Katharina von Bora, who would become Luther’s wife, escaped from this convent in 1523 to join the Reformation movement.

In a display of public campaigning for the Reformation, in 1523 theologian Argula von Grumbach challenged the university’s faculty over the punishment of a Lutheran student.

In 1525, this was the site of the decisive battle in the German Peasants’ War. At the Battle of Frankenhausen, the insurgent peasants fighting under Thomas Müntzer were defeated.

Luther and Huldrych Zwingli met here in 1529 to discuss the theology of the Lord’s Supper. They could not agree, leading to a split between the Lutherans and the Reformed.

Founded in 1527 by Philip I, Landgrave of Hesse—who greatly aided in expanding the Reformation—the university was an early training ground for Lutheran pastors.

Known as the “Second Martin” within the Reformation, unity-seeking German reformer Martin Chemnitz served as the superintendent of churches here.

The Schmalkaldic League formed here in 1531 as a defensive alliance formed by Protestant territory representatives against the Holy Roman Empire’s efforts to stamp out Lutheranism.

It’s believed that John Knox died at the site of what’s now called the John Knox House in 1572. The only surviving medieval building in Edinburgh, the historic house is now a Knox museum.

The John Calvin Museum is on the original site of Calvin’s birth house. Today it houses Reformation propaganda and early editions of Calvin’s works.

The Council of Trent, held here between 1545 and 1563, was a Counter-Reformation-focused ecumenical council of the Roman Catholic Church that resulted in decrees on self-reform and dogmatic clarifications.