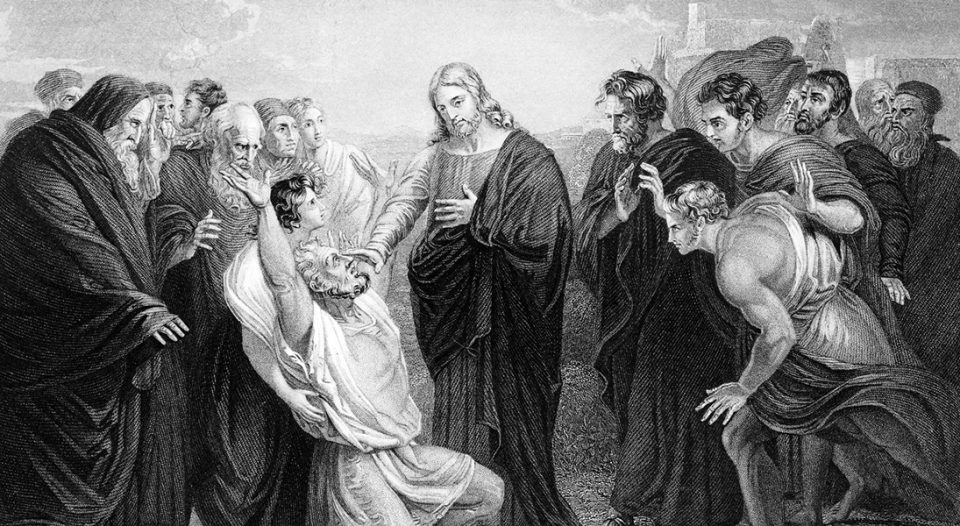 Before we begin judging the disciples, let’s take a good look at ourselves. We also fall victim to this sort of thinking all the time. “What did I do to deserve this?” we whine when something inconvenient happens to us, as if God were sitting in heaven with a “sin-o-meter” keeping track of our misdeeds and doling out demerits for “Sacred Honor Code” violations. Thank goodness God doesn’t actually work that way because if we really were directly punished for our sins, we’d all be a lot worse off than we are—me especially. Jesus says that neither the man nor his parents are to blame, after which Jesus heals him with mud and spit and a wash in the spring, all the while talking about being the light of the world and going about doing God’s work. And before anyone can catch their breath, a dizzying cycle of questioning begins.

First the neighbors. And we must admit, we’d be as amazed, confused and puzzled as they are. He looks like the man born blind—but, but, this guy can see. How could that happen? The blind man kept saying, “It’s me. It’s really me.” And they kept saying, “But how?” And the man told the simple unvarnished truth, without interpretation—“This man called Jesus made mud, spread it on my eyes and said to me, ‘Go to Siloam and wash.’ Then I went and washed and received my sight.”

Next it was the Pharisees’ turn. These were really, really, good people who were really, really, completely convinced that God had set up the world so that the following things were always and forever true:
1) Sinners cannot do miracles.
2) Working on the Sabbath is a sin.
3) Healing is work.
4) Jesus healed, i.e. worked, on the Sabbath.
5) Therefore, Jesus was a sinner.
6) Therefore, Jesus could not work a miracle.

The whole discussion with the Pharisees, and his parents, and then the Pharisees again, (verses 13 to 34), revolves around these issues—and I do mean revolves. The argument goes around in circles as the man who once was blind sticks to his straight story about his healing. “I do not know whether he is a sinner. One thing I do know, that though I was blind, now I see.” And the Pharisees can’t take it. What has happened has broken their model for how God works. Jesus does things that they consider sin, and sinners can’t work miracles, and yet this man claims Jesus healed him. Does not compute! Does not compute! The Pharisees are upset because Jesus has not followed their rules, has not acted according to their carefully thought out guidelines.

I remember a poster that hung over my wife’s desk when we were in college. It showed a grumpy looking gorilla with its hands over its ears and with its eyes closed. The caption read, “DON’T CONFUSE ME WITH THE FACTS. I’VE ALREADY MADE UP MY MIND!” That was the Pharisees; they had already made up their minds. Though the neighbors and the parents swore that this man had been born blind, though it was obvious that he could now see, though it testified over and over that Jesus had done it, they could not accept it. It did not fit their preconceived and well thought-out plan of how God works in the world. And so they got angry and threw the man out.

In the last paragraph, John shows us the man born blind having a conversation with Jesus. When Jesus reveals his identity as the Messiah, the Christ, the Son of Man, the man born blind confesses his faith saying, “Lord, I believe!” Then we hear Jesus explaining what has just happened: “I came into this world for judgment so that those who do not see may see, and those who do see may become blind.” The text uses two meanings of sight and blindness here. Physical sight and spiritual awareness, and the writer is making the point that though the Pharisees can see with their eyes, they are the truly blind people in the story.

When I was a teenager, our church youth group sang a song made popular by singer Ray Stephens, “Everything Is Beautiful.” It contained the line: “There is none so blind as he who will not see.” The Pharisees refused to recognize that Jesus was a good man, a healer, perhaps a prophet, maybe the Messiah, because he did not fit their system.

But rather than judging them let us ask ourselves, “What truth about God have we failed to see because it does not fit with the way we want to see the world?” For the writer of the Gospel, Jesus was more than a just good man, more than a mere teacher of moral truth, more than an insightful interpreter of human nature. This story teaches us that Jesus is the Son of God, the Christ, the Messiah, the Light of the World. It proclaims to us that Jesus came into this world to open our eyes to the truth about God, about love, about sin, and, most importantly, about grace and forgiveness.