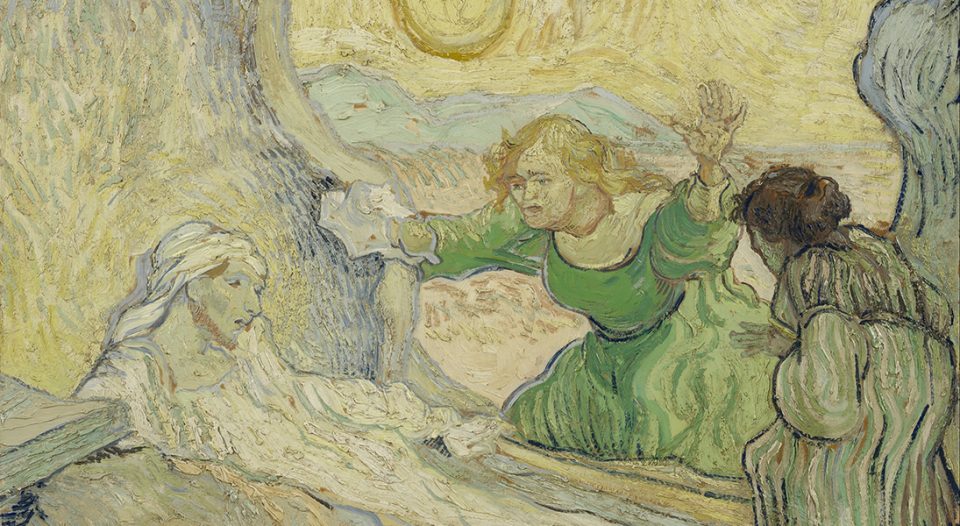 What does life after death hold for us? Is this all there is, or is there something more to follow? And, if there is life after death—what difference does it make now? Is the promise of life after death just pie in the sky, bye and bye? Or, does an awareness of God’s power to overcome death make a difference in how we live our lives? Here. Now. Each of our Scripture lessons deals with these questions of life, death and life eternal.

Ezekiel looks out over a valley of dry bones and hears God ask, “Son of man, can these bones live?” St. Paul writes to the church in Rome and says, “To set the mind on the flesh is death, but to set the mind on the Spirit is life and peace.” And the Gospel lesson is the story of the raising of Lazarus, a story containing much talk of life and death and the startling sign of Jesus bringing a dead man back to the world of the living.

Lazarus is the one man who could have told us much about what effect a second chance at life might have. Unfortunately, the Bible doesn’t tell us much about what happened to Lazarus after he walked out of the tomb, merely noting his presence at dinner with Jesus six days before the Passover.

In his book Soul Survivor, Phillip Yancey tells this true story: In 1821, a boy was born into a well-to-do St. Petersburg, Russia, family. After graduation from the Imperial Military Academy, the young man found that he was more interested in writing than fighting, and so he became a journalist and a novelist, writing about the life of the well-to-do in Czarist Russia. He also spent much time discussing politics with other young writers, whiling away the afternoons in bars and cafes, filling the time with coffee and communism, rum and revolution.

Czar Nicholas I quickly learned of the young radicals group and decided to teach them a lesson. He had them arrested, tried and sentenced to death by firing squad. They were dressed in white death gowns and led to a public square where the military detail awaited them. Blindfolded, dressed in burial clothes, hands bound tightly behind their backs, they were paraded before a jeering crowd and then tied to posts. The order “ready, aim” was shouted. The rifles were cocked and … at just that moment a horseman rode up with a message from the czar: Sentence was commuted to four years of hard labor.

Fyodor Dostoevsky never fully recovered from this experience. He had peered into the jaws of death, and from that moment life became for him precious beyond calculation. “Now my life will change,” he said, “I shall be born again in a new form.”

In his life after that there were two signs of that profound born again-ness. One was faith in Christ. As he boarded the convict train for Siberia, a devout woman handed him a New Testament, the only book allowed in prison. He read the Gospels, over and over again, while he was in prison and emerged with an unshakable confidence and belief in Christ. The other was that he came out of prison a different type of writer. His naive views on the inherent goodness of humanity were shattered on the hard rock of the gigantic evil he found in his cellmates. Yet, over time, he glimpsed the image of God in even the lowest of prisoners. He came to believe that only through being loved is a human being capable of love. Out of this transition came his great and moving novels of sin and repentance, forgiveness and grace: Crime and Punishment, The Brothers Karamazov, The Idiot.

Those of us who baptize infants by sprinkling and pouring sometimes miss one of the great messages of baptism, a message fully evident in the immersing, the dunking, of an adult convert completely beneath the water. In baptism, we “die and rise with Christ.” Listen to the words of the funeral service from the Evangelical Lutheran Worship:

“When we were baptized in Christ Jesus, we were baptized into his death. We were buried therefore with him by baptism into death, so that as Christ was raised from the dead by the glory of the Father, we too might live a new life” (ELW, p. 280).

“so that … we too might live a new life.” The gospel is, no matter when it is that our physical bodies die, our most important death has already taken place, our death to sin and the devil. We live each day as new creatures in Christ and death no longer holds any threat for us. English poet and priest John Donne said, “Death be not proud.” Why should Death be not proud? Because Death cannot win, indeed, Death has already lost.